If the results are tight, then a recount has to take place by hand. 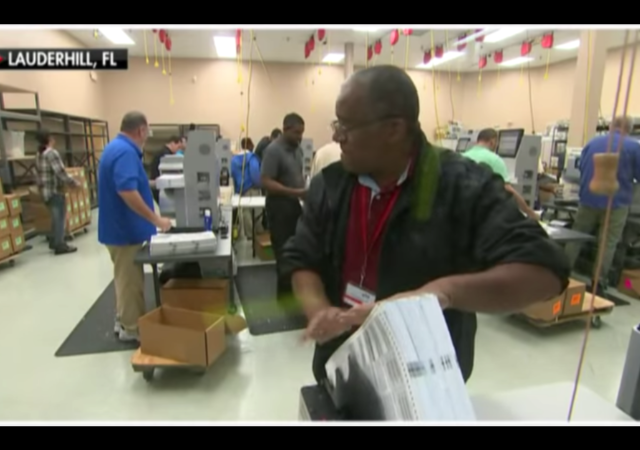 I detailed yesterday how the recount in the Florida senate and governor races have become messy, especially in Broward County.

Now it looks like election officials may have to recount votes by hand instead if the results are too tight.

Incumbent Democrat Sen. Bill Nelson has also demanded that his opponent Governor Rick Scott recuse himself from the recount.

The election mess has put the spotlight on Broward County Elections Supervisor Brenda Snipes once again. From The Wall Street Journal:

Ms. Snipes, 68 years old, was appointed to the position in 2003 by then-Gov. Jeb Bush, a Republican, to succeed a supervisor removed after widespread accusations of mismanagement. A former public school administrator and a Democrat, Ms. Snipes garnered praise at first for stabilizing the office and overseeing relatively smooth elections. She has been re-elected several times, most recently in 2016.

In 2004, however, she lost track of 58,000 absentee ballots, blaming the post office for losing them before revising the number of lost ballots to 6,000 and quickly getting replacements to voters. A judge this year ruled that Ms. Snipes violated law by prematurely destroying ballots from a 2016 congressional race that came under court challenge. Ms. Snipes called it a mistake but as a result, Mr. Scott’s office ordered state elections monitors be placed in the county ahead of last week’s voting.

Still, problems arose. Ms. Snipes’s office on Friday mixed 22 rejected provisional ballots with a batch of around 200 valid ones. She deemed it accidental but said the bad ballots, due to signature mismatches and other reasons, couldn’t be identified. Broward County, over the objections of Mr. Scott’s lawyers, included the ballots in its unofficial vote count presented to the state on Saturday. A judge also found Friday that Ms. Snipes violated state law by not turning over ballot information to Mr. Scott’s campaign immediately after the election. No statute addresses such a violation, so the path forward is unclear.

Nelson wants Scott to recuse himself from “any role” during the recount. From CBS News:

The developments make this a tumultuous political moment in Florida. This recount process is unprecedented even in a state notorious for settling elections by razor-thin margins. State officials said they weren’t aware of any other time a race for governor or U.S. Senate required a recount, let alone both in the same election.

In a video statement, Nelson said Scott is “using his power as governor to try to undermine the voting process,” as he called on him to remove himself from the recount. “He’s worried when all the votes are counted, he’ll lose the election,” he said. The Scott campaign said he will be coming to Washington this week to participate in some orientation activities for new members of Congress, including the photo and voting in leadership elections.

In the Senate race, Scott’s lead over Nelson was 0.14 percentage points.

The Miami Herald reported on Monday that Broward County has faced numerous machine glitches that has caused a delay in the recount.

Now the officials face another challenge: triggering of manual votes. From The Miami Herald:

An overvote occurs when a voter marks two candidates in a race. An undervote happens when a voter leaves a race blank. Hand recounts of these ballots ensures there are no machine errors in reading votes.

A manual recount would be triggered Thursday afternoon if the number of overvotes and undervotes is greater than the number of votes separating the two leading candidates — meaning if those votes have the potential to decide the election. That is all but a certainty in two races based on the Herald/Times review of county-by-county data.

This is how it will work:

The task of sorting through ballots will fall to counting teams, designated by county canvassing boards. The teams will include at least two people, who should represent different political affiliations, and will be closely watched by lawyers for each candidate. If a counting team cannot agree on a voter’s intention, or if the lawyers object to the team’s decision, the ballot in question will go before the full canvassing board.

“It’s going to require that each canvassing commission in each county appoint a great number of people to serve on the counting teams,” said Florida elections lawyer Thomas Shults, who said he worked for Republicans in the 2000 recount.

Sarah Revell, a spokeswoman for the Division of Elections, said she expects supervisors of elections to do the recounts one race at a time.

/me throws the BS flag…

freeze the count back before all the shenanigans started, call the election and move on with gutting and replacing the corrupt election staff in those counties, prosecuting everyone culpable.

In a video statement, Nelson said Scott is “using his power as governor to try to undermine the voting process,

Oh, sure. And various (D)s in Florida is not undermining the process and has never undermined the process – ever? How come real corruption doesn’t bother this clown, only hypothetical corruption?

I “DEMAND” all Democrats permanently “Recuse” themselves.

the whole “overvote/undervote” thing is garbage too.

if i won’t vote for either candidate, i mark *both* choices, so some helpful slug at the counting palace can’t “fix” my mistake…

some folks leave them blank for the same reason.

and anyone who either misses one, or makes a mistake and doesn’t ask for a new ballot while voting deserves to have their voice ignored.

this is all just an excuse for MOAR fraud, so the Demonrats can steal what they didn’t win.

You have completely misunderstood the issue. Obviously actual overvotes or undervotes cannot be counted. The issue is whether the ballots that the scanner rejects as overvotes or undervotes are in fact that, or whether a physical inspection will make the voter’s intent obvious. Those votes should be counted, and the law requires them to be counted, but they’re usually not because they’re too few to make a difference. But if the scanner rejects are enough to potentially affect the result they must be inspected to see whether they’re really invalid or the machine just couldn’t handle them.

But somehow they always without fail break for Democrats – weird isn’t it?

notamemberofanyorganizedpolicital in reply to rdm. | November 13, 2018 at 3:19 pm

It is a county that leans heavily D, so one would expect any votes that were rejected by the scanner but can be read by human eyes to break heavily D too.

The vote is tainted. #TooLate

The rest of the country did it in one damn evening. Everybody knows they have been busy manufacturing votes this entire time and yet we as a collective nation are powerless to stop it? I am flabbergasted that this can happen and that this will inevitably become the new normal.

buckeyeminuteman: The rest of the country did it in one damn evening.

That is incorrect. Most states take several days to complete the vote count. Some states haven’t even received all their absentee ballots (e.g. Maryland allows absentee ballots to be received and counted up to November 16). However, in most contests, the results are not so close as to make a difference after election day.

Petty corruption and non-petty corruption both undermine faith in public institutions and democratic processes. The less people trust in those institutions, the less effective those institutions are. People either become less inclined to participate in those corrupted processes or — seeing the corruption and assuming that it represents the normal and expected state of play — come to accept or even to encourage similar corruption on their own side. One suspects that the Democrats spend so much time wailing about “disenfranchisement” — which is how they describe the enforcement of ordinary voting laws and standards of credibility — for precisely that reason. If you tell yourself that you are just trying to level the playing field, you can justify all kinds of corruption.

The Democrats have been playing with fire for a long time. Both Florida and the United States offer criminal penalties for official misconduct regarding elections. It is time to make an example.
https://www.nationalreview.com/2018/11/brenda-snipes-florida-broward-county-election-supervisor-must-be-held-accountable/

Yep. But give yourself a treat and read the whole thing.

If it goes to a manual recount then Broward County will still be delayed because the canvassers will have to remove shoes and socks to count higher than 10.

Still not as good as the days when Mr Dangling Chad kept the whole country entertained.

Florida must be quite a place.

The overthrow of the government and the conversion of the US to the USSA continues apace.