“an unrelenting and pervasive conspiracy to terminate the employment of Plaintiff” 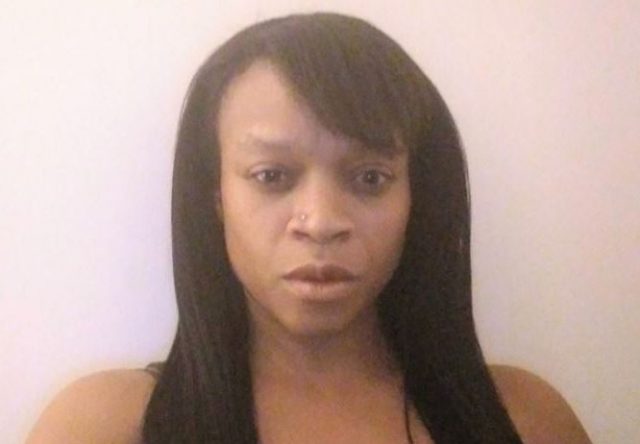 Joy Karega is the former Oberlin College professor of social justice writing who caused enormous controversy when her anti-Semitic conspiracy theories she spread on Facebook were revealed.

The short version is that Karega, at least based on what she posts on Facbeook, sees Zionist and Jewish conspiracies almost everywhere, including claiming Israel was behind 9/11, and that the Charlie Hebdo attack and downing of Malaysian Airlines Flight 17 were Mossad false flag operations. She also circulated and posted about the Rothschild family controlling the media and seeking global domination, so no mere anti-Zionist loon here….

Not surprisingly, Karenga is hosting a pro-BDS event on campus this week sponsored by Oberlin Students for a Free Palestine and featuring Prof. Robin Kelley.

Here are some examples of her postings: 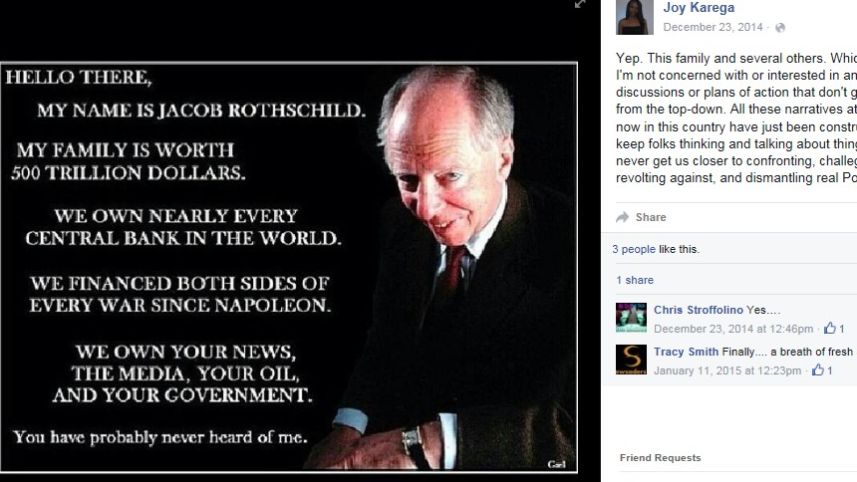 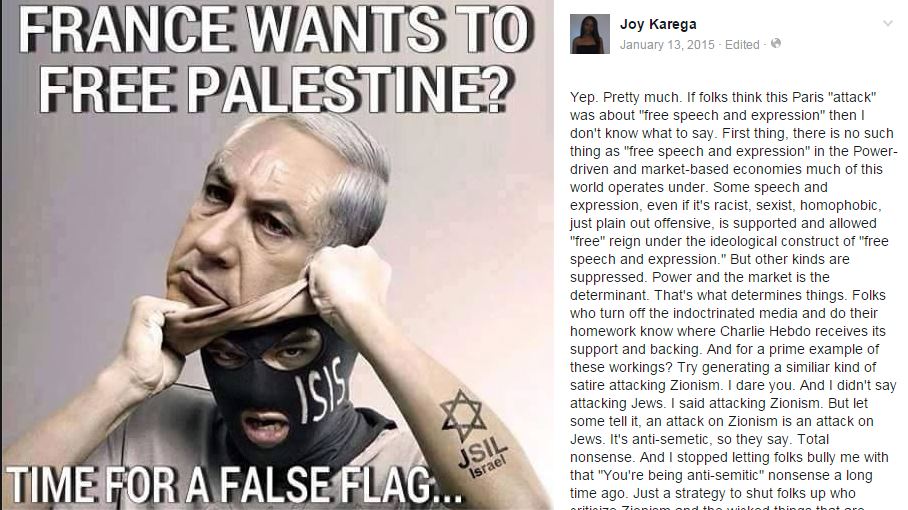 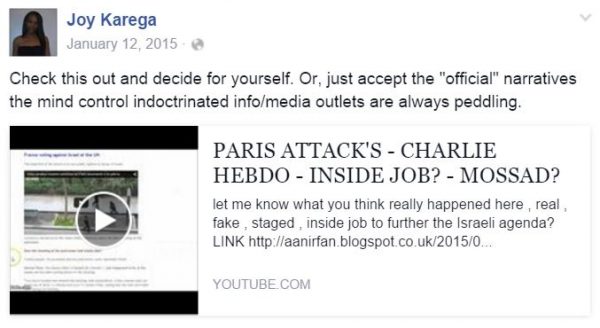 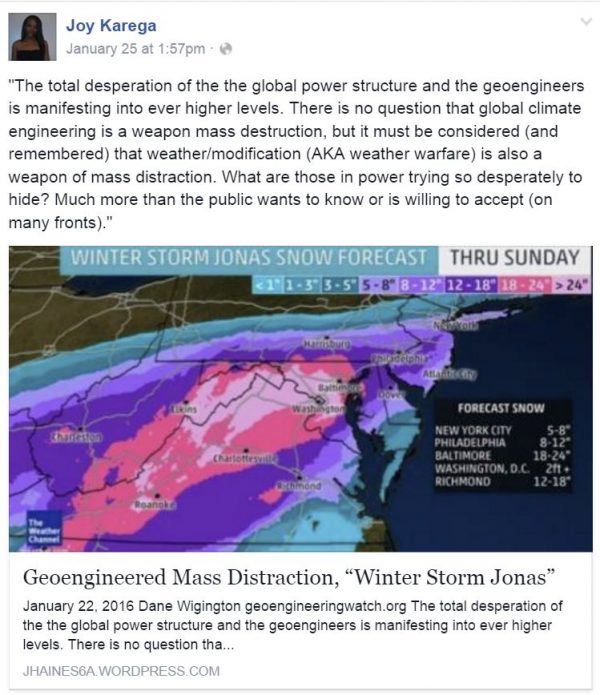 Here are some of our posts as events unfolded:

This all culminated in her termination, Oberlin College fires Prof. Joy Karega after antisemitic Facebook posts.

Yesterday Karega was fired effective immediately. The following statement was issued by Oberlin on November 15:

I know the news is coming in. Trust me, this is not a surprise. I’ve been dealing with the persecution, incompetent leadership, and discrimination from Oberlin College since March. No surprise here.

I will be issuing an official statement soon. I could easily release a “Kiss My Ass” statement. I would be MORE than justified in doing so. But that is not my style. I choose my weapons CAREFULLY and STRATEGICALLY. And trust, I have done that. There will be a challenge and defense of my rights, using ALL the avenues I have available to me — litigation, public, etc. The pathway for that has already been laid…. 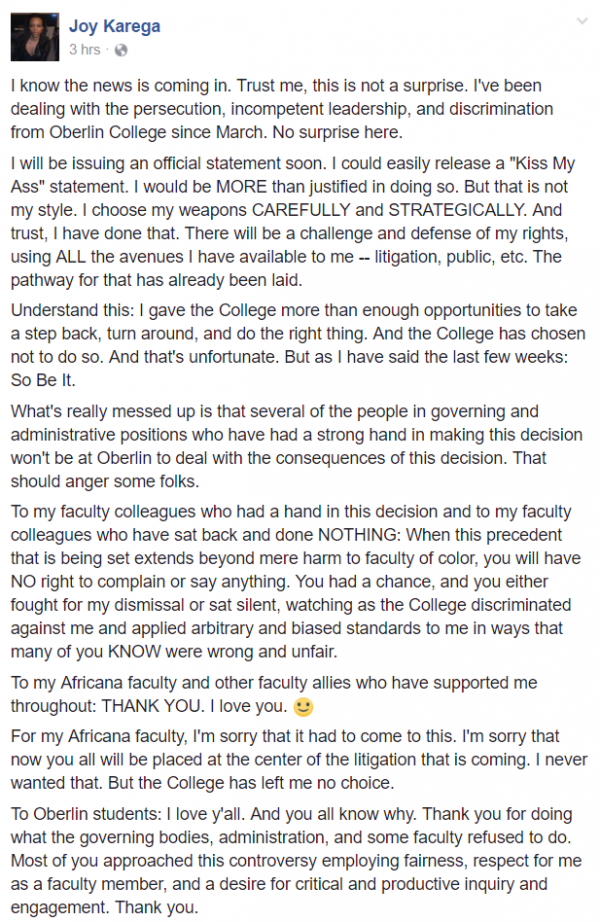 Karega has followed through, and filed a Complaint (pdf.)(full embed at bottom of post) in federal court in Ohio.  Cleveland.com reports:

A former Oberlin College professor fired after her anti-Semitic online posts drew international criticism sued the liberal-arts college Friday, alleging that officials there discriminated against her and concocted a plot to oust her from her job.

Joilynn Karega-Mason, who worked as an assistant professor of rhetoric and composition from December 2013 to November 2016, says in her lawsuit that Oberlin officials “engaged in an unrelenting and pervasive conspiracy to terminate the employment of Plaintiff.” ….

Karega-Mason says the university’s discrimination included filing false charges of professional misconduct, soliciting student complaints, trying to eliminate black people from having the authority to make decisions for the college and ignoring racist language and discrimination committed by men and white women.

The lawsuit also says officials solicited “professionals” from throughout the U.S. “in an effort to generate and manipulate adverse opinion(s)” against her….

[Former Oberlin President Marvin] Krislov, then-arts and sciences Dean Timothy Elgren and then-Board of Trustees chair Clyde McGregor are named as defendants in the lawsuit. Karega-Mason brings claims of breach of contract and employment discrimination, among others, and is seeking more than $885,000 in damages.

Assuming for the moment that what the Oberlin College administration says is true, I applaud them for providing Dr. Karega ample due process.

Now if only they, and other colleges and universities, would recognize the need for appropriate due process when handling Title IX claims.

Dr. Karega is highly unlikely to prevail in her claims just based on the due process that she received — that’s one reason why you go through such a process and document thoroughly. Colleges and universities should listen to the lawyers a little more and to the social justice activists a lot less in this regard.

notamemberofanyorganizedpolicital in reply to stevewhitemd. | November 10, 2018 at 2:51 pm

is the new
way to spell
….SATAN!

Joy Karega is the face of affirmative inferiority. In light of how many Cracker Jacks toy like degrees which are being handed out, exit exams demonstrating that the person is actually qualified are in order.

Eh, they hired her to behave this way, so they really don’t deserve credit for anything.

Now that she’s been noticed, they’re just up their own culpability.

If I was her lawyer, I’d make the argument that she was hired to be racist and anti-semitic. That would be fun to watch, at least.

Forget the card, she is playing the race deck. Getting rid of her is one of the few moves done by Oberlin recently that I actually agree with.

If she does not get her Oberlin job back, she could always go to work for Broward County Elections.

notamemberofanyorganizedpolicital in reply to Anchovy. | November 10, 2018 at 2:51 pm

Odds are she does already.

Or get a nobel prize.

Or work with Alexandria out in Seattle.

I was wondering how anti-Semitic you had to be on campus to stand out. This nutcase qualifies.

Wow. These Evil People are as ugly on the outside as they are on the inside.

TheFineReport.com in reply to notamemberofanyorganizedpolicital. | November 10, 2018 at 5:18 pm

And her name: “Joy.” How’s that for an oxymoron.

Malice aforethought. Hoping she is ordered to pay the other side’s attorney fees and it is huge. Haters deserve no less. They must feel terribly bad about themselves to conjure such rage.

That would eliminate a lot of frivolous lawsuits.

I would take it a step further, if she is unable to pay start auctioning off her organs.

Social justice and the progress of color judgments (“diversity”).

Given everything we know about Oberlin’s universe, it strains credibility to believe that their reason for getting rid of her is because she’s an intellectually dishonest anti-Semitic nutjob. Or for any reason relating to her race. There’s another reason driving this. It may be because of pressure from influential alumni donor(s) because of her expressed ideas, but that’s not the same thing.

Maybe they caught her impersonating an indian to get hired.

Assistant Professor of Rhetoric and Composition

If one can get a doctorate in something as styrofoam at Educational Leadership, like the good Doctor Snipes in Broward County, an assistantt professorship in Rhetoric and Composition is not that far-fetched.

There seems ample evidence that she can’t write a coherent essay, let alone provide a logical argument to support whatever bizarre theories she’s promoting. Perhaps she feels no need to do these things because, well, umm, why?

Perhaps the school could learn something from this, and make a little more effort to hire faculty who actually show some promise in the areas of their supposed expertise?

It’s not as if there’s no competition for these jobs. How could they have hired her in the first place?

karega is a mere mihelle obama, and about as gpod looking. Though apparently not as gluttonous.

We desperately need to take back our schools, or malignant, angry, hacks like this psycho will continue to poison our young – and the dummiess they poison become alexandra occasional-cortexes.

There’s a vector for any epidemic. Interrupt the vector and you stop the contagion.

So . . . who hired this weirdo in the first place? Some prophylactic effort in the vetting and hiring process would reduce the chance of reinfection.

Funny how you never see the Jews playing the victim. Oh sure, they are like “hey don’t genocide us”, but when they screw up they dont blame was whites, asians and hispaniv-kangaroos.

“A former Oberlin College professor fired after her anti-Semitic online posts drew international criticism sued the liberal-arts college Friday, alleging that officials there discriminated against her and concocted a plot to oust her from her job.”

Moral relevancy at work. And because she’s black she also gets to play the race card to soon be followed by the sexist card. GoFundMe account will start in 3…2…1…

Wow, there’s even a vast CONSPIRACY to get her fired!
This lady sure loves her conspiracies!
Hit the road sweetie…

Oberlin is still around? Thought it imploded.

What so ironic, is that the Jews have been supporting the Blacks in their efforts to eliminate discrimination, BUT now there is an anti-Semitic streak appearing in (some) black movements. I suppose MLK is turning over in his grave by now.,,,,,and Jews should not be so quick to support everything the Blacks demand.