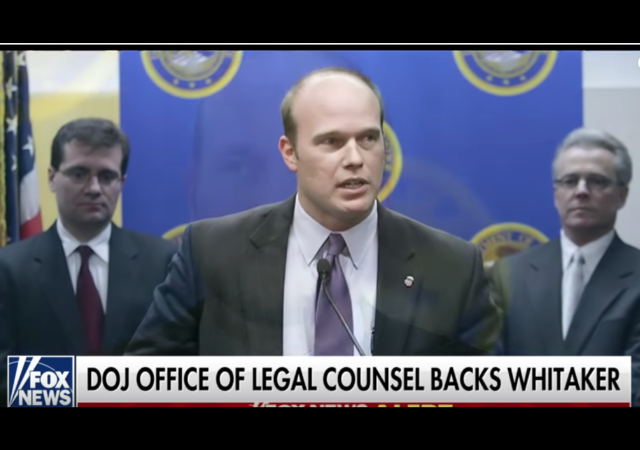 The Department of Justice has ruled that acting Attorney General Matthew Whitaker can serve in the position.

Whitaker came under criticism after President Donald Trump appointed him when Jeff Sessions stepped down. Whitaker served as Sessions’ chief of staff.

The DOJ’s Office of Legal Counsel reached its decision from “provisions of the Vacancies Reform Act, which allows for the appointment of a senior staffer who had been in office for at least 90 days.”

A senior official at the DOJ said that “the White House sought legal guidance from Sessions’ own department on available options for replacing the attorney general” before Sessions resigned.

Although Justice’s own line of succession provides for the deputy attorney general or other confirmed officials to serve as acting attorney general in the event of a vacancy, the Justice opinion argued that the internal provision for succession “does not displace the president’s authority to use the Vacancies Reform Act as an alternative.”

The opinion went on to assert that Whitaker’s designation was in keeping with the Constitution, which requires the president to obtain Senate approval before appointing so-called “principal” officers.

“Although an attorney general is a principal officer requiring Senate confirmation, someone who temporarily performs his duties is not,” the opinion stated. “As all three branches of government have long recognized, the president may designate an acting official to perform the duties of vacant principal office, including a Cabinet office, even when the acting official has not been confirmed by the Senate.”

The last time an acting attorney general served without Senate confirmation was in 1866, when Assistant Attorney General J. Hubley Ashton served for six days after the resignation of Attorney General James Speed, according to the report.

The opinion said presidential authority to make such designations dated to the early years of the government, citing 160 appointments before 1860 in which “non-Senate-confirmed persons performed, on a temporary basis,” the duties of secretaries of State, Treasury, War, Navy, Interior and Postmaster General.

“Mr. Whitaker’s designation is no more constitutionally problematic than countless similar presidential orders dating back over 200 years,” the opinion stated.

Is this a “rule of law” type of an argument? What Dem would ever accept that?

It’s ridiculous that it was ever a question

On the contrary, it’s a serious question with no good answer. On one hand the constitution’s text seems clearly to forbid it. On the other hand practice since the 1790s seems to have no problem with it. It’s a little late now to say “Oops, everyone’s been wrong about this for 225 years, let’s change now.”

The 7-month time frame seems too long, however. It would probably be better to limit the period to 60 days, and allow extensions in extenuating circumstances.

“Oops, everyone’s been wrong about this for 225 years, let’s change now.”

They did it with same sex marriage.

They did it (not quite 225 years) with Reynolds vs Sims.

I’m certain there’s quite a few others we could come up with. Each and every one being to the ultimate detriment to a civil society.

Judge Nappy of FoxNews and self-styled Conservative John Yoo have both argued that Whitaker’s appointment is unlawful.

Nappy is a blithering legal idiot. Thank God he is a ‘former’ judge.

What is insulting beyond belief is that the President or the White House wouldn’t have nailed this down IN ADVANCE… and I’m sure they absolutely DID. So all these beltway RINO’s , NeverTrumpers, Media and Democrats are all mansplaining that this is illegal!! High Dungeon!! Incredible!!

DOJ says totes ok. ” Not good enough !! ” ” Must recuse ! Because…. reasons! Orange Man Bad ! ” This is insanity. Washington DC , the Democrats, the sitting Government in DC, RINO’s and K street, not to mention the media, ALL have not accepted that Trump won. ANYTHING he does is illegit in THEIR view. This is the problem with not accepting the election.

Now all of the above are going to flatly dismiss ANY indictments from the DOJ regarding anything to do with the coup. They are going to judge-shop to find a Federal court here or there to impede the Trump DOJ from anything remotely unhelpful to the last two years of insanity. Crazy.

Too much alcohol. Send that legal BOZO to rehab.

Yet another non-issue from the whirling dervish of petpetual outrage burped up by the Left.

The next non-issue constitional crisis created by the evil orange man which threatens the nation in 5, 4, 3, 2,…Zzzzzz

“It’s ridiculous that it was ever a question”

Not ridiculous if its goal is too keep us on defense.

If you are always punching keeping me on my heels covering up, who is most likely to win the fight? These are jabs to set up a knockout blow.

Its also shifts the Overton Window. Consider a ridiculous assertion like “Fen is an extraterrestrial”. If you are forced to entertain and debate such a ridiculous idea, you should easily refute it. But you will also be left with a significant minority who now believe “lets compromise – Fen may not be an extraterrestrial, but he’s certainly not fully human either”. And that was the entire point of asserting the ridiculous: to “normalize” the idea that Fen isn’t human.

In this case, it’s another brick in the narrative that Trump is an authoritarian despot who’s presidency should not be legitimized.

Why do Republicans keep playing defense? Pelosi is corrupt, sick the IRS on her. Fusion GPS should be in a courtroom fighting for their lives. Hillary should be in prison.

GOP on their back, covering up

So you are not an extraterrestrial?

I had such high hopes…

Kavanaugh was another jab. How much time energy and money was spent rescuing him that would have been better spent in Florida and Arizona?

Here I beg to differ. Kavanuagh was not a rescue. Kavanuagh was a full eight rounds of a title fight. No matter who was nominated the Dems had already anounced they were going to oppose them. Why concede a fight when you have a champion in your corner.

You miss my point. Concede? No. The Kavanaugh nomination never should have been in jeapordy to begin with. But we played defense and let them draw out what should have been an easy victory. Passive mistakes.

Think about it – when is the last time the GOP overplayed their hand? We ALWAYS err on the side of caution. We always take the safe shot.

The biggest complaint the Left has is the danger Whitaker poses to the Mueller probe ‘Insurance Policy’.
Whatever criminal act anyone on the Left is ever going to be charged with cant be investigated because its the subject of the ongoing DOJ ‘Special Counsel’probe

So for the legal beagles, can Whitaker now shut down the Mueller witch hunt and make Rosenstein retire?

Legal vs illegal doesn’t seem to matter much any more. With apologies to people in the biz.. it just seems to be a big…. ah… lets just say gray area..

Rosenstein is a Trump appointment and not Whitaker’s to “make retire”. Can make the ground burn under his feet, of course.

As for shutting down the Mueller investigation: yes, but in accordance with current regulations, he’d owe Congress an explanation why, and any attempt to keep that letter private would surely fail. “Can” does not equate “should”, at least not yet. Besides, wouldn’t Whitaker have the right to force Mueller away from fishing expeditions far beyond Russia?

The explanation will be classified.

As a non-lawyer, I would presume some sort of ‘feather plucking’ would be involved in shutting down the Mueller probe, the first step of which would be for the AG to find out *what* was being investigated. For the sake of argument, let’s give them letter codes of A-F. The resulting directions from the AG could then read:

“Since A has no bearing on Russian influence in the 2016 elections, I am moving it entirely to the US Attorney for XYZ, along with the four employees in your office who were involved. Since B is a Foreign Espionage issue, I am moving it and the associated employees to the Counterintelligence section of the FBI where it can be given better attention. Investigation C involves strictly criminal conduct unconnected to the Trump campaign as stated by you, so I’m moving it to…”

Then at the end, it’s just Mueller in an empty office, writing his memoirs (which have to be approved by the FBI before publication, fat chance).

I can only assume the idiots that complained about the appointment did so because they believed that Trump just did this off his own back.

To these idiots it probably never crossed their puny little minds that Trump would have spoken to the DoJ and every man and their dog about what he can and cannot do (remember, this is NOT the Obama administration where there was nothing they were constitutionally restrained from doing, including giving guns to bad guys to kill Americans).

So of course the DoJ was going to clear this BECAUSE they had already cleared this BEFORE Trump made his decision!