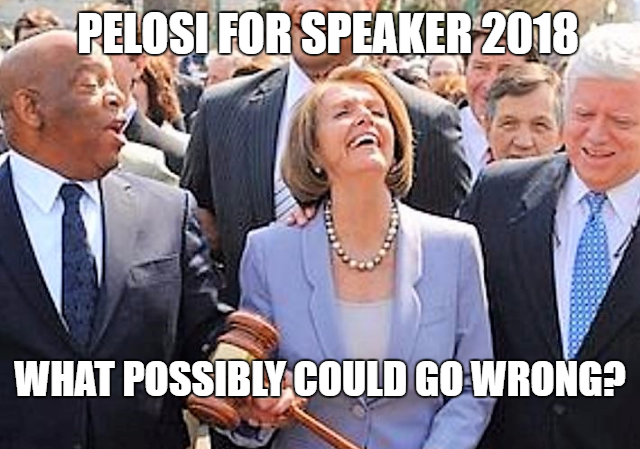 With the midterm election only days away, it’s worth taking a look at what is going on around the web.

Democrats have gone from prematurely wallowing in their early-projected blue wave victories to setting up talking points that explain away a less than “wave” showing in Tuesday’s midterm.

Politico wonders: “Democrats Say Republicans Are Stealing the Midterms. Are They Right?”  Because Jim Crow.  Or something.

Meanwhile, Bret Stephens over at the former “newspaper of record” rambles incomprehensibly in answer to his titular question, “Why Aren’t Democrats Walking Away With the Midterms?”  Spoiler: Stephens seems to conclude that it’s because Trump is both a masterful rhetorician and an incompetent con artist, both a wily communicator and a bumbling boob who can’t string together a coherent sentence, and both an economic menace and presiding over the lowest unemployment rate “since Vince Lombardi coached his last game in December 1969.”

Stephens and his #NeverTrump ilk aren’t alone.  Their buddies in the leftstream media #Resistance are eager to make the midterms a referendum on President Trump.

The New Yorker assures us this is so: “The Midterm Elections Are a Referendum on Donald Trump”

As does CBS News, though they qualify it to the “Trump economy”:  “The midterm elections are a referendum on the Trump economy – but the GOP can’t count on a strong verdict”

Centrist Democrats are already done, pre-midterms, with the far-left lunge of their party and are looking to 2020.

Ed Rendell (D-PA) at the Hill cautions his party: “Democrats, beware: We are leaning left too far”

Frank Bruni of the NYT asks, “What Kind of Democrat Can Beat Trump in 2020?”

Meanwhile, the leftstream media is cranking out articles that I imagine must be intended to help Democrats.

For example, check out this gem from the AP, “Trump stumps in cities that don’t look that much like US.”

The non-“US” cities in questions include much of America’s heartland:

Trump has largely eschewed the big metropolises for smaller cities. He has been to Tampa, Nashville, Cleveland and Houston — where the arenas could accommodate his crowds. But he’s primarily been jet-setting to smaller places such as Elko, Nevada (population 20,078). Or, Mosinee, Wisconsin (population 4,023). Or, Belgrade, Montana (population 7,874).

When Trump stops at Belgrade on Saturday, historical records suggest he will be the second president to visit the Montana town named after Serbia’s capital city. In 2009, Barack Obama held a town hall in Belgrade to promote the Affordable Care Act.

Since March, Trump has crisscrossed the country like a salesman with a set territory. The majority of his trips have been to just nine states. They are Ohio, Pennsylvania, Tennessee, Florida, Missouri, Montana, Indiana, West Virginia and Nevada.

The idea is, I guess, that Trump is appealing to the American voter who rejects the modern day Democrat-socialist party. Or something.

Trump should be stumping, according to this logic, where progressive Democrats have a stonghold and from which their vision of “US” can best be beamed out beyond their urban and elite strongholds.

Democrats are all over the map and have no idea at all how best to combat Trump.  They are flailing, lashing out, and belittling the very voters they need in their corner.

We’ll find out on Tuesday whether that “strategy” has worked.  One thing that I do think is correct is that the midterms are a referendum on Trump.  He’s made it so by pointing out the very simple fact that a Democrat House (and/or Senate) will cripple his ability to do anything further on his campaign agenda.   With a Democrat House investigating this, subpenaing that, and impeaching the president, we’re going to go right back to pre-Trump with a lame duck president whose only recourse is the pen and phone, neither of which matter once the next president takes office.

Trump made this a national-level mid-term, negating entirely the approach that the Democrats were planning to take. Then, Mitch McConnell kept the Senate in session, making it harder for the Democrats to campaign. And Trump’s rallies have kept all the accomplishments in front of Americans, highlighting if they want more, it is a binary choice…and they will have to vote Republican.

I say the GOP takes it all this Tuesday. The only thing remaining, at this point, is the lamentation of the women.

This woman is voting (R) right down the ballot. I love DeSantis, so that’s a no-brainer. The only one I don’t feel great about is Rick Scott; I was happy when he reversed his decision to expand Medicaid in Florida under ObamaCare (was furious when he initially announced he’d do it) and was very unhappy with his post-Parkland gun control signing. He’s a piece of crap, finger to the wind, drift-with-the-latest-poll loser. But then, so is Nelson, who will vote with Pelosi 100% of the time. I’ll vote for Scott because he’ll vote with the president at least some of the time; Nelson never ever will. They’re birds of a feather, bendy, squishy losers, so I have to pick the bendy squishy loser who will vote my way at least once or twice (and under pressure, that’s the great side of bendy squishy losers, call their office enough times, and they’re suddenly against what they were for).

Nelson will, and has, voted with Schmuck Schumer, and before him Dingy Harry Reid. Of course Pelosi, in the House, works from the say play book as Schumer.

same, not say dang it.

Nelson is stupid, senile, dishonest and a little creepy. I wish he and Mazie Hirono would go on a hike together without a compass…..not that either know how one works.

Based on early voting, it seems to be going that way. If election day turnout follows the normal pattern where GOP exceeds Dem, it will end up as a red wave.

Trump made this a national-level mid-term

Didn’t Newt Gingrich do that as well? When was it…’96?

1994. It was truly a glorious moment, as proven by the media’s reaction.

Democrats are all over the map and have no idea at all how best to combat Trump.

Same as it’s been for three years. I don’t expect that to change. The D’rats have never been good at new ideas.

Elko/region isn’t the run down mining district it used to be. Flipping and holding votes outside Vegas/Reno-Carson City may be the difference between an outright loss and a closely contested election.

I just got a call from a local Democrat volunteer, asking me if I would consider voting Democratic. I really gave him an earful. “After watching the disgusting display of the Kavenaugh hearings, I’ll never vote for another Democrat as long as I live.” I continued, “Even the local Democrat Headquarters is ashamed to use the word Democrat on their building.” There are literally thousands of campaign signs along the local roads and not a single one of them says “Democrat”. They are ashamed, as well they should be.

I’ll admit I don’t understand what the heck is going on. There should be no way Ted Cruz isn’t 20 points ahead of Robert Francis O’Rourke, instead of only 10. And what the heck is going on in Florida? Gillum promises more taxes, like any good Socialist-Democrat would. He’s for gun control (like O’Rourke) and a host of other Socialist-Democrat issues. I thought people move to Florida (mostly when they retire) because, in large part, of the favorable tax situation. Now the Yankee transplants are going to vote for a guy who promises to raise their taxes???

Trump has mastered the rope-a-dope strategy …

Good sentiment, but I would like to hear what Miss Cleo has to stay,

Miss Cleo, Miss Cleo, you sorta trailed off there. Could you finish the sentence, please?

Excellent synopsis of where we stand.

Something I have been seeing, but I don’t understand, is that For the last week (or so) the Democrat usual suspects have been trumpeting over and over again how much money has been raised (usually in individual races) as if the large amounts of funds raised is THE measure of success.

Intuitively, I know it is significant, because it is odd that they are suddenly making fundraising such a significant indicator.

I don’t know enough about campaign finance to understand why they are doing this. I’m wondering if they know they are toast and somehow prepping the donors who have flushed LOTS of big donations down the toilet, making them feel that they are not alone, or that this is money that can use for 2020 or…??? Just not getting why this meme is suddenly in every article I read.

I think that they are using the amount of $$$ they’ve raised as a false metric of their candidates popularity – Case in point, Beto has trounced Cruz in his election fundraising but is still behind. He is now airing desperate negative ads against Cruz hoping something will stick. Today the Houston Comical was crowing about the fact that the dems have a lead in the number of votes cast in Harris county but don’t mention that the Republicans are up by over 750K statewide. False metrics – lying demo-rats.

Their buddies in the leftstream media #Resistance are eager to make the midterms a referendum on President Trump.

Sheer madness. It’s incredible that even brain-challenged D’rats could think this will work in their favor.

They really do think that they have their grubby fingers on the pulse of the nation, and that it’s beating in their favor. Madness.

The universal answer to any political or economic question has become: “Because Trump”. Even more than Bill Clinton, he has sucked all the air out of the room.

For better or worse, for who knows how long.

As to that AP article, Obama is only campaigning in predominately black venues, telling me they are very nervous about getting out the black vote

He’s a neauseating little weasel of a fraud, isnt he.

voted straight r as well–have done that a few times before and always viewed it as a vote for the team not necessarily the individual members–considering the d’s as a group, other than a couple of notable standouts, they’re nearly all brain-damaged and the leftists in their party are just flat insane

Just saving myself the time and energy. Carry on.

Disclaimer, found it on reddit. I want it to be clear that I would never ever watch SNL.