Lindsey Graham may take over the Judiciary. 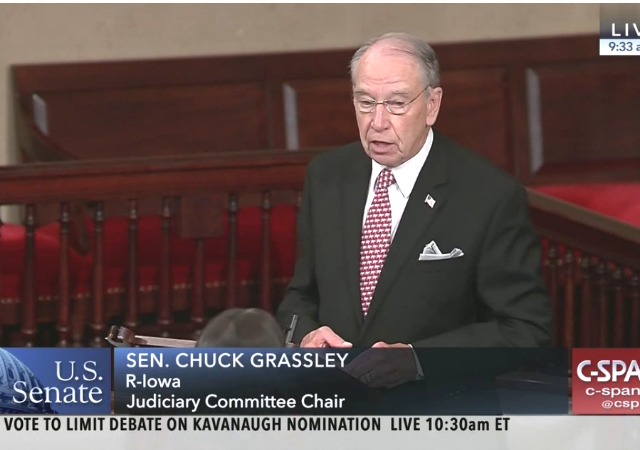 Sen. Chuck Grassley (R-IA) has decided to leave the Senate Judiciary Committee, which he chaired, to lead the Senate Finance Committee. From Politico:

“The economy is better than it’s been in years and there’s a sense of optimism about the future of our country that people haven’t felt in a long time thanks to the pro-growth policies of a Republican President and a Republican majority in Congress,” Grassley said. “Looking ahead, at the Finance Committee, I want to continue to work to make sure that as many Americans as possible get to experience this good economy for themselves.”

Grassley will replace retiring Finance Chairman Sen. Orrin Hatch (R-UT). He’ll also replace Hatch as Senate pro-tem, a position “traditionally given to the longest-serving majority senator that is also third in the presidential line of succession.”

Grassley’s absence from the Judiciary Committee means that Sen. Lindsey Graham (R-SC) may become chairman for the powerful group.

Graham shot up in fame during the confirmation hearings for Supreme Court Justice Brett Kavanaugh. He will have “oversight of the DOJ as it supervises special counsel Robert Mueller’s investigation into President Donald Trump.” From The Hill:

The South Carolina Republican will also have jurisdiction over the Department of Justice and special counsel Robert Mueller’s investigation into the Trump administration.

Graham met Thursday with Matthew Whitaker, the acting attorney general whom Trump appointed to replace Jeff Sessions the day after the election.

Whitaker assured the senator that he saw no reason to fire Mueller, something that has been a top concern of Democrats and some Republicans since Sessions’s resignation.

“As to Mueller investigation, I’m confident that it is not in jeopardy,” Graham said after meeting with Whitaker.

Whitaker told Graham that he doesn’t think Mueller’s probe has breached any guidelines.

“There’s no reason to fire him. I asked him, ‘Do you have any reason to [fire] Mr. Mueller. He said he has zero reason to believe anything is being done wrong with the Mueller investigation,” Graham said, recounting the conversation.

Good. Grassley’s weakness and incompetence are the entire reason Kavanaugh turned into such a shitshow, and he STILL HAS NOT done a single thing to Feinstein for pulling this shit AFTER they had concluded questioning.

Go back and watch the opening of the Ford hearings. When she’s up there telling her bullshit story in that pathetically fake little-girl voice, Grassley and the others acted defeated. They EXPECTED to engage in a rousing round of Failure Theatre and vote him down, before Kavanaugh and Graham showed them where their balls were.

Graham has been on a rampage the last couple months. I only wish he’d take over right now so we could see what he’d do in response to Flake’s bullshit.

thank the fact that that NeverTrump McCain was no lomger yjere with feckless flake.
mccain was a fine military man but a TERRIBLE loser in the Senate and POTUS baiter.
Graham has a chance to shine!

If I am fortunate enough to be selected by my colleagues to serve as Chairman, I will push for the appointment and Senate confirmation of highly qualified conservative judges to the federal bench and aggressive oversight of the Department of Justice and FBI. https://t.co/aGu4bXX1Hq

With statements like that it is perplexing and amazing the Rasputin type of influence McCain appears to have had over Graham.

Given that Graham has retrieved his b*lls from John McCain’s lockbox, I wouldn’t be surprised if he morphs into the worst nightmare for Judiciary Committee Democrats. I think it’s safe to predict that if Harris, Booker, et. al. try to pull their antics again at future nomination hearings, they’ll be slapped down faster than half-frozen fruit flies.