She’s unhappy that her character is under the microscope, but there’s good reason to be wary of Snipes 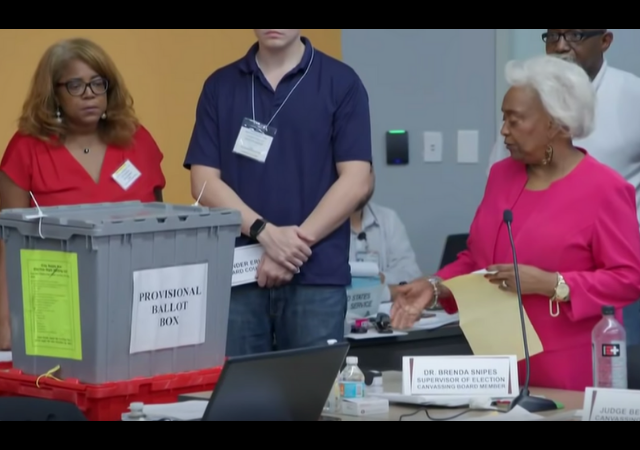 During a press conference Tuesday, Brenda Snipes, Broward County’s embattled Supervisor of Elections, indicated she might step down.

Broward County SOE Brenda Snipes also hit back at Trump's tweet: "I don’t have a treasure trove to go out digging on the beach somewhere to find any votes."

"It is time to move on, to let someone else… I think I have served the purpose that I came here for…."

"I haven’t finalized that. I’ll just check with my family."

Snipes is unhappy that her character is under the microscope:

Buuuuuut, there’s good reason to be wary of Snipes given her longstanding history of election irregularities, particularly in a race with a razor-thin margin.

The Miami Herald outlined a few:

For an incredibly detailed account of Snipes’ past, see the Miami Herald here.

Under NO circumstances allow her to ‘step down’. She’ll just run again during the next election.

She needs to be FIRED and PROSECUTED and prevented from ever holding an office for dog catcher again.

I doubt there’s anything she can be prosecuted for, but even if she were prosecuted how would that prevent her from being elected to anything?

Could be a part of a plea agreement.

I don’t think it can be. No court has the authority to enjoin someone from contesting elective office. Cf Elliot Spitzer.

You have a good point. Wasn’t there a D.C. Mayor who was reelected even with a felony conviction for cocaine possession.

Step Down? Seriously, how can she possibly go any lower?

“I’ll just check with my family.”

She has the stuffing of the ballot box down pat, so she is a shoo in.

Trivial FYI, ‘SOE’ refers to Supervisor Of Elections, not Secretary.

I thought it was “Stealer of Elections”

“It is time to move on, to let someone else… I think I have served the purpose that I came here for….”

Yes, you did that. Now, a nice fine and jail cell…

You forget the “PROTECTED” is Protected Minority. When the USA morphs into a country … place… geographical area… and Whites are a minority forget equality… social justice means punishment and diminished rights for centuries… if ever. Thurgood Marshall wanted affirmative action for centuries.

Ragspierre and I don’t exactly see eye to eye on certain things, coming from much different perspectives, but on this I find myself in complete agreement. At bare minimum, she has demonstrated vast organizational incompetence. Malice may or may not ever be proven, but at the very least, the quality of her work simply isn’t acceptable.

This is almost Baltimore level incompetence.

I’m sure she’ll step down as soon as she’s done disenfranchising Republican voters. So, like never.

When I was a kid I was taught that incompetence and corruption would undermine your career and/or life. The older I get, the more I see these horrible traits rewarding way too many.

Does anyone in charge have standards?

Brenda reminds me of that woman from ACORN, Bertha. Bertha is not a DOKTOR, like Brenda.

The DOJ or the State, I don’t care which, needs to make sure she is wearing her new favorite color Orange for the foreseeable future.

I seem to recall trucks delivering pallets of votes.

Laura Loomer caught Gillum and Snipes meeting at her church.
What are those two doing meeting in the middle of a recount??

“Snipes is unhappy her character is under a microscope.
How ironic. If she has any character, a microscope is the only way to find it.

She’s just pouting because somebody turned over her rock and exposed her to public scrutiny.