“As I reflect on this year’s round of rampant gluttony and credit card debt, some sort of counterbalance is overdue.” 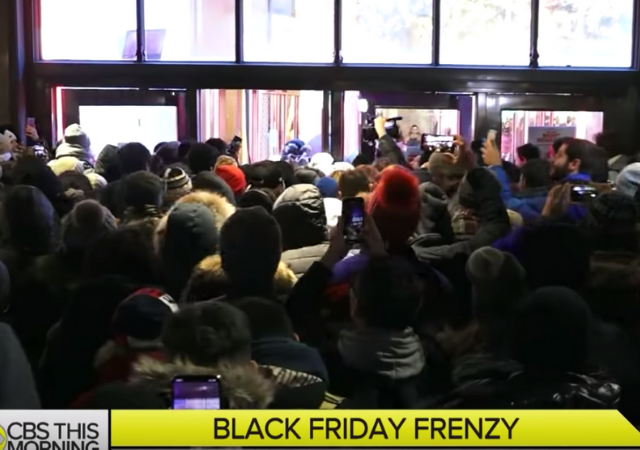 A few years ago I remember listening to a random episode of the Rush Limbaugh Show live when Rush was on holiday and had a guest speaker sitting in from New York City. He did a segment on the much-ballyhooed “War on Christmas” that has been contentiously discussed on the right side of the aisle and flatly disregarded on the left.

His point was visceral. When walking down the streets of New York City, he was looking for the massive Macy’s Christmas displays only to realize that the store hadn’t set up any sort of Christmas decorations that year. He checked other department stores and found their garish displays of yesteryear had become truncated and minimalized. The point was visual and fascinating. It seemed modern life was starting to push Christmas traditions out of the public square. We would see this further debated with the hotly contested Starbucks coffee cup controversy.

The decline in traditional Christmas celebration is a symptom of society’s progressive march into consumerism. The holidays continue to transform from a meaningful expression of love and family into a transactional formality. This isn’t some grand capitalistic corporate conspiracy mind you. It is a year by year agreement between citizens and companies that want to sell us things that making things more convenient, cheaper, and available sooner is for our benefit. Unfortunately, this same attitude is bleeding into Thanksgiving more each year.

I won’t lie. I love Black Friday shopping. This year, I went to track down a new Blu-ray player and a copy of Kingdom Come: Deliverance for PS4 while both were on sale. I did it because it’s fun. Spending money and saving money on deals feels good. That’s a huge part of the problem. It’s easy to want to leave the family party on Thanksgiving after hours to track down cheap DVDs and gift cards for friends. Yet at the end of it, I can’t help but feel that this is missing the entire point of the Holiday.

In recent years there’s been a huge push on the progressive left to turn Thanksgiving into a hostile place for partisan discourse. Whether it’s the push to facilitate arguments between Trump supporters and liberals or the incessant need to revitalize the “Truth History of Thanksgiving” discussion by turning a holiday about gratitude into a bully pulpit to grandstand about Native American oppression there is no shortage of people trying to rip the Holiday to pieces. Yet that’s not where the true loss of the holiday lies. Black Friday consumerism has done more to drain Thanksgiving of gratitude of meaning.

When I was young, I remember hating the part of the Holiday where my family would make everyone sit around the table and state something they were thankful for. Being the bratty ten-year-old of the lot, finding something to be thankful for was not first on my mind. I wanted to cover everything on my plate in ketchup and gravy and go to town.

As I reflect on this year’s round of rampant gluttony and credit card debt, some sort of counterbalance is overdue. I don’t want to be the same child that couldn’t think of anything to be thankful for as he eagerly awaited food. I can do better than my adolescent self at being grateful for our unique position in the human experience. As toxic and frustrating as the current political moment has been, we so regularly forget just how lucky we are.

For this year’s round of spending and eating, many of us are due for some charitable spending and fasting to make up for it on the other side. Considering how and what you can give, and reminding yourself how much there is to be thankful for will go a long way to righting the ship.

Thanks for the reminder and I appreciate all of the authors here at LI. Keep up the good work!

“We ought to give thanks for all fortune: if it is ‘good,’ because it is good, if ‘bad,’ because it works in us patience, humility and the contempt of this world and the hope of our eternal country.”
– C.S. Lewis

Standing: Great quote from a great man of God.

I think Dennis Prager is onto something in his book, “Happiness Is a Serious Problem: A Human Nature Repair Manual”. He says the most important requirement for happiness is gratitude.

This explains why the vast majority of leftists are unhappy.

I think Black Friday is losing ground.. On a radio show someone observed that Black Friday has morphed into more of a season, it has been diluted. I won’t miss it when it fades into history.

Seems to me like BF is a day of seriously compromising what a person really wants for a cheap substitute on blow-out sale. I’d rather pay full price for what I want, when I want it, than to put up with BF bait and switch madness.

Black Friday brings out the worst in humanity. I know it exists but I don’t need to see it up close and personal so I skip the shopping nightmare and buy stuff year round when it goes on sale.

Not everything is an orchestrated assault on an American tradition. Sometimes a sale is just a sale.

Black Friday began as an attempt to take advantage of the fact that the Friday, after Thanksgiving, is now becoming a part of the Thanksgiving holiday, so more people are home from work and able to participate in sales.

It is also a way for businesses to have a massive sales event which generates credit card payments before the end of the year. What has happened in American consumerism is the extensive use of credit. Unlike cash, and most check payments, credit payments take weeks to arrive and be posted. If sales are made a week or two before the end of the year, but payment is not received until after the beginning of the next year, this can have significant consequences for large businesses.