Two political writers believe Democrats may only flip two of the 23 House seats held by Republicans. 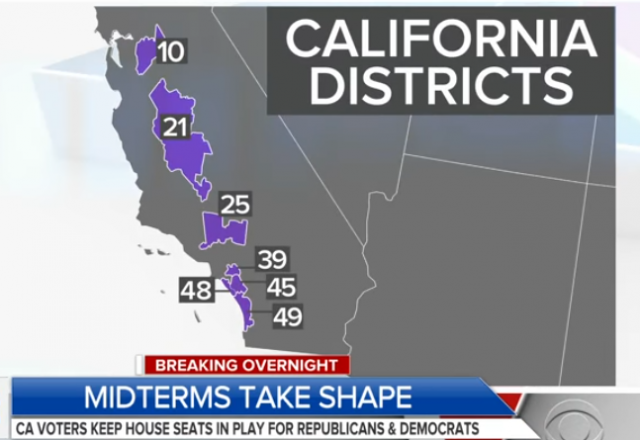 Midnight blue California is often cited as an indicator of national trends.

If this is still the case, then the big blue wave predicted by some pollsters and progressive pundits will become a big blue drip. Early voting in the Golden State is trending bright red.

Election Day is around the corner and Californians have been voting for three weeks. Given the data on who has voted so far, it does not point to a big surge for Democrats.

There are scores of first time candidates running for office but actual voter turnout in California so far has been average for a midterm election.

KPIX 5 talked to an expert who says, this trend is bad news for Democrats.

“What we’re seeing in the early returns though, is that the early returns are largely coming from those older, whiter, homeowners, more Republicans,” said Paul Mitchell, Vice-President of Political Data, Inc. “And young voters are not returning their ballots at the same rate.”

The response from Republicans may prevent the Democrat Party takeover of the House of Representatives, complete with Speaker Nancy Pelosi.

With the midterm elections just days away, there’s little indication that California is seeing a “blue wave” of Democratic votes, at least in the early returns of vote-by-mail ballots — and in some key races that will help determine control of the House, Republican voter response has been strong.

There are still a lot more ballots to come in, cautioned Paul Mitchell, vice president of Political Data Inc., which supplies voter information to a variety of political campaigns. But so far, according to a mail ballot tracker he runs, Republican votes are keeping pace with the number of Democratic ballots.

“Looking at the comparable numbers, the statewide mail ballot returns at this point are running about 40 percent higher than the primary, 1.7 million to 1.2 million,” he said.

Interest is definitely high in the Republican-held congressional districts that Democrats are looking to flip in their quest to gain the 23 seats they need to take back control of the House.

The San Francisco Chronicle political writers John Wildermuth and Joe Garofoli believe the Democrats may only flip two of the 23 House seats held by Republicans in California.

The data is consistent with what is occurring in other states as well.

Get-out-the-vote efforts now assume special importance. Careful planning, precise targeting, months of preparation, and vast amounts of volunteer hours now either pay off in early and absentee voting as well as Election Day turnout, or they don’t and campaigns sink. But initial reports are good for Republicans. Last week NBC News found “GOP-affiliated voters have surpassed Democratic-affiliated ones in early voting in Arizona, Florida, Georgia, Indiana, Montana, Tennessee and Texas”—all of which have key races for Senate, governor or both.

Nevada is the only state with a crucial Senate race in which NBC reported a Democratic advantage in early voting. That’s accurate but incomplete. As of Tuesday night, Nevada’s early-voting results show an over 3-percentage-point swing toward the Republicans from the last election’s early voting. Since Democrats carried the state by 2.4 points in 2016, the GOP looks to be in the hunt for the state’s Senate and gubernatorial races.

Any report, opinion, assertion, or prognostication that indicates the Democrats are going to win big next Tuesday will be nuclear-grade gas-lighting.

I am going to go out on a limb, head to the edge of a branch, and grab a leaf to predict that when the actual votes are tallied Nov. 6th, the Republicans are going to make significant gains across the country. And while I am skeptical that the GOP will take the California governor’s race, I believe that the Democrats won’t be flipping as many of the state’s congressional seats as initially projected.

I hope the “blue wave” fizzles and dies, and even better would be seeing the Republicans picking up a few seats. Almost as much fun as election night 2016, almost.

Election night 1994 was the real nightmare election for Democrats. Losing the house was an upset that no one predicted. I enjoyed that night tremendously.

I expected Trump to win. He was running a campaign to win the tossup states. His opponent was running to rack up votes in safe states. Which she did, successfully. And lost the election as a result.

Well they can’t blame Republican state elections officials, there are none.

Can you imagine? If the rest of the nation isn’t swinging blue and it’s up to California to tip the house, I can just see CNN and MSNBC breathlessly reporting on the location of polling centers and discount UBER codes to get there.

One small problem: by voting early like this the Pubs give the Dems in the boards of elections offices a clue as to just how much work is required to steal that particular election…

hey, i looked in my toilet bowl & saw a blue disk…. but then it fizzed & suddenly nothing but blue dye… an omen that the demo-rats will be ‘flushed’after Tuesday?

The blue areas in that map seem like they should be red, since most are in the middle of the state. Duncan Hunter’s 50th district is not shown. That is a tough race but I don’t see that district going to his opponent Najjar, whose grandfather was involved in the Munich Olympics massacre in which 11 Israeli athletes were killed.

According to this article, Hunter is in the lead. https://www.cbsnews.com/news/indicted-rep-duncan-hunter-maintains-lead-over-democratic-opponent-ammar-campa-najjar/

I guess they are saying those are the toss up seats. Cook Report lists 10,25,45,48 as Republican toss ups (with 39 showing open)

It lists 21 as likely Republican

49 is likely Dem but showing open.

notamemberofanyorganizedpolicital in reply to elle. | November 2, 2018 at 4:02 pm

For what it’s worth, our county cast just under 17,000 votes in the 2016 election. My wife and I went to vote a couple of days ago, and the total number of ballots cast was right at 6,000 (there’s only one voting machine at the Board of Elections office and I checked the number). Pretty hefty numbers for an off year election. Our county leans right consistently. Hopefully, it’s the GOP who’s motivated.

Oh, and my son’s name is still on the rolls here, even though he’s registered in another county. So, I voted early at the courthouse, which means I could show up at our precinct on Tuesday, give my son’s name, and vote again. Election fraud is silly and impossible, right?

the thing is, you they would arrest and prosecute.

illegal aliens not so much.

“…, I believe that the Democrats won’t be flipping as many of the state’s congressional seats as initially projected.”

I’m cautiously optimistic that this is true nationwide.

I wonder how much of this ‘big blue wave democrats flip the house #resistance enthusiasm’ is akin to the 2016 Hillary neurosis that the media constantly hammered about how she had a 93% chance of winning?

Then came the meltdown when proved untrue….

i drop our absentee ballots off at the poll on Election Day & watch them all the way into the box.

i have ZERO faith that the USPS will get them there, and even less that the County Registrar will count them if they do.

it’s a whole lot harder to ignore them when they come in with the other ballots.

at least i hope so.

Turnout is all well and good, although my usual view is that a higher early turnout may just mean fewer on election day. But Republicans bragging about their ground game is just missing the point. Where they need to have massive representation is in the vote counting rooms. Cook shows most of the Dem takeovers in blue states, for the simple reason that it’s easier to cheat there.

There are all kinds of cheating. What you allege is unproven. Not even Project Veritas will have any documentation.

Voter suppression is happening in the bright sunshine.

Ditto for extreme gerrymandering. I know that democrats have done that in the past. But republicans are the offending party, now. California has an impartial panel to apportion districts. That is why republicans have a chance. What about Texas? Austin was chopped up into 5 congressional districts. 1 runs all the way to San Antonio.

So don’t whine too loudly if you lose.

NPC; “What you allege is unproven”

It has been proven, several times now.

From someone who thinks a boy is a girl or that a 5 second state is rape, any allegation of voter suppression is simply not credible

I skeptical of reports about a large early Republican turnout. It’s just the thing then Dems would flood the weekend with to fight democrat complacency.

But then that puts me in Princess Bride territory:

(exhibit A) so clearly I cannot drink the wine in front of me, but

(exhibit B) so clearly I cannot drink the wine in front of you, but

Some back-of-the-envelope calculations regarding the races (copied from a post on Instapundit):
The early voting is so large that the turnout seems much more like a presidential year, so I will compare to those figures.

*** = these races are probably already over. The GOP lead is too big for the Dems to overcome.
If the normal pattern holds that GOP turnout is greater on election day than for Dems, we’re looking at a red wave.

I’m in CA-49, Issa’s old seat. It has never been held by a Dem…NEVER! So now I’m supposed to believe that this district is “likely Dem”? An Environmentalist Lawyer?? Yuck! I’m not yet convinced. I won’t believe it until the final votes are counted.