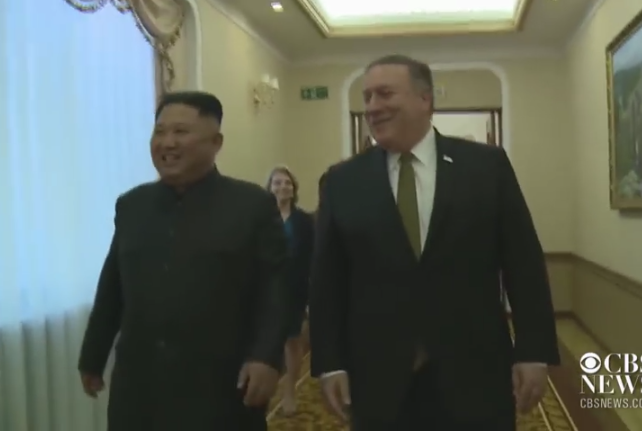 When reporting on the landmines removal from the Demilitarized Zone (DMZ) between the two Koreas, I noted Secretary of State Mike Pompeo was on his way for a meeting with North Korean Chairman Kim Jong Un to discuss denuclearization of the peninsula.

It appears the meeting was a success.

The U.S. and North Korea agreed Sunday to hold a second summit between leaders Donald Trump and Kim Jong Un “as soon as possible,” according to a statement by South Korea’s presidential office, with the American side saying that Kim had also invited inspectors to a key nuclear facility.

The Blue House released the statement after U.S. Secretary of State Mike Pompeo met in Seoul with South Korean President Moon Jae-in to discuss his meeting with Kim in Pyongyang earlier the same day.

Later, the U.S. State Department said Pompeo and Kim had “refined options for the location and date of that next summit.”

I anticipate there will be as much drama and staging as we observed with the Singapore Summit.

Pompeo indicated that in his meeting with Kim, the leader of North Korea had agreed to allow inspectors into a key nuclear testing site that the North has claimed it has destroyed.

The inspections of the nuclear site could be significant, if they go ahead. North Korea blew up the tunnels in Punggye-ri in late May, inviting cameras to witness the explosion. But the pictures did not make clear whether the destruction was limited to the tunnel entrances, which could be cleared later, or included the tunnels themselves, where the nuclear tests occur.

The statement from the State Department did not say who would conduct the inspections. The International Atomic Energy Agency, the United Nations’ nuclear watchdog, takes inventory of nuclear fuel and fuel-producing equipment, but does not usually deal with nuclear weapons or test sites.

There are also plans for the North Korean leader to meet with regional heads-of-state in the near future as well, according to South Korean officials.

South Korea’s president said he expects North Korean leader Kim Jong Un to meet with the leaders of Russia and China soon, as Pyongyang turns to two old backers ahead of a possible second summit with President Trump.

Mr. Kim, whose trip to China in March was his first outside North Korea as leader, is likely to request support from Beijing and Moscow as he presses the U.S. for concessions in return for North Korean progress on dismantling its nuclear facilities.

…On Monday, [South Korean President Moon Jae-in] said he expects Mr. Kim to travel to Russia to meet President Vladimir Putin and for Chinese President Xi Jinping to visit North Korea in the near future. He added that a summit between Mr. Kim and Japanese Prime Minister Shinzo Abe is also “open.”

“A new order is being created on the Korean Peninsula,” Mr. Moon told a cabinet meeting, according to a transcript provided by the presidential office.

The media asked President Donald Trump about North Korea as he hosted Nikki Haley’s press conference from the West Wing to announce her resignation as UN ambassador. Trump mentioned that a second summit will happen, “timing won’t be too far away,” and it may not happen in Singapore. From CNN International:

“As I’ve said about a thousand times, you’ve got no rockets flying, you’ve got no missiles flying, you have no nuclear testing, you have nuclear closings, closing up different areas of North Korea. We’re getting the remains back … we got our hostages back, and I didn’t pay $1.8 billion, like the previous administration. I paid nothing,” Trump said in the Oval Office, apparently referring to an Obama-era Iran deal.

Intriguingly, the new order may not be confined to the Koreas. In the wake of the Trump Tariffs, China’s stock market is down 21 percent year over year, industrial output is slowing and its currency is weakening. In fact, Xi ordered state-media outlets to tone down their rhetoric.

Almost from the moment he took power in 2012, the Chinese leader was so confident that his own country’s rise was unstoppable, and so certain that America was in terminal decline, that he openly boasted about the China-dominated world to come.

He even drew up a series of grandiose plans — China would dominate high tech by 2025, the Asia-Pacific region by 2035 and the world by 2049.

Xi may try to blame his propaganda flacks for overdoing it, but the Chinese people know who is responsible. In backing off the braggadocio, Xi is “slapping his own face,” as the Chinese say.

The Chinese state-run media has been busily throwing up a smokescreen to cover Xi’s retreat. It has launched increasingly unhinged attacks on what it calls the “lunatic,” “insane” and “terroristic” Trump administration.

Apparently, senior Chinese officials are privately indicating that have come to view “Trump as a Sun Tzu-like strategic genius.”

“In private, however, senior Chinese officials have come to view Trump as a Sun Tzu-like strategic genius.” https://t.co/JBRjNeHvws

I will look forward to reporting on the second summit. Hopefully, it will also feature a fun video that drives the press crazy!

Seems to me, this could be a great opportunity to negotiate the brief exile a few Democrat senators to North Korea.

Quite a few of them need a time out in the kind of socialistic utopia they want for the rest of us.

“And when you come, could you bring some more of those Ring Dings. And that Häagen-Dazs stuff, any flavor, all flavors.”