He won the runoff with over 55% of the vote. 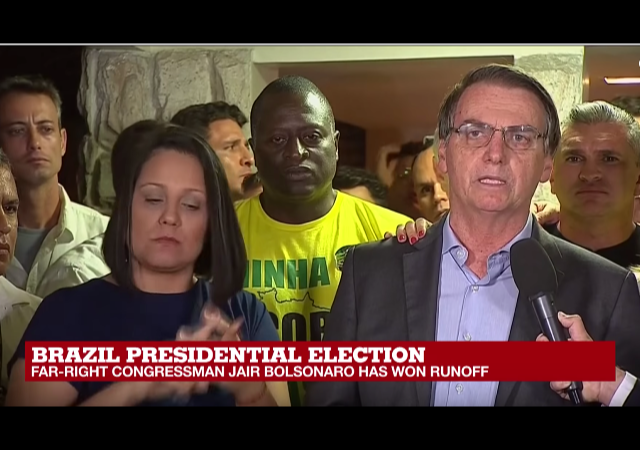 Jair Bolsonaro, known as the “Trump of Brazil,” has won the presidency in the runoff against former Sao Paulo Mayor Fernando Haddad with 55.1% of the vote.

The ex-army captain has portrayed himself as an outsider, even though he spent 27 years in Congress.

Bolsonaro, who cast himself as a political outsider despite a 27-year career in Congress, is the latest of several leaders around the globe to gain prominence by mixing tough, often violent talk with right-wing positions. But he also is very much a product of a political tempest in Brazil that made his messages less marginalized: widespread anger at the political class amid years of corruption, an economy that has struggled to recover after a punishing recession and a surge in violence. The name of his party, PSL, translates to “Social Liberal Party,” although it largely abandoned its socially liberal platforms after he joined.

Bolstering his rebel image is his reputation for offensive statements and sometimes extreme views, including insulting women, black people and the LGBT community.

“I’m afraid to go out at night when it gets dark,” said Raquel Nunes, 27, a secretary from Sao Paulo and an avid Bolsonaro supporter, as The Wall Street Journal reported. “But he’s going to solve this, he’s going to be firm, talking didn’t get us anywhere so we need to respond with force.”

Bolsonaro took a softer tone after he won, telling the people of Brazil, “You are my witnesses that this government will be a defender of the constitution, democracy and liberty and this is not just the promise of a party, or the empty words of a man, but an oath to God.”

I wrote a few weeks ago that a Bolsonaro victory may not make much of a difference in Brazil because his party should win a few more than 50 seats in Brazil’s “lower house of congress, while Haddad’s PT is expected to win a few more seats than the SLP in the same body.”

Despite the offensive things he has said, Bolsonaro managed to bring in support, mostly due to the fact that Brazilians do not like the Workers’ Party after years of corruption. I mean, he ran against Haddad, “the stand-in candidate for former President Luiz Inácio Lula da Silva, who was jailed this year for corruption.”

You would think the party would have pushed away from da Silva, but The Wall Street Journal reported that he “continued to call the shots for the Workers’ Party from his police cell in southern Brazil, holding frequent tête-à-têtes with Mr. Haddad, who registered as his lawyer to secure regular visitation rights.”

Speaking after the result Sunday, Mr. Haddad said he would continue to guard over his supporters, who fear Mr. Bolsonaro will set back gay and women’s rights, bully political opponents and pose a threat to the country’s young democracy.

“I saw the anguish and fear on many people’s faces…but don’t be afraid, we will be here, we will be with you,” he said.

Sunday’s vote brings to an end one of the most turbulent election campaigns in Brazil’s recent history, which has sparked rancorous feuds between families and friends.

Trump of Brazil. So, we all blame the Russians or the Portuguese? I’m so confused.

That’s 175 deaths per day. This Bolsonaro guy has a big priority job to do, so call him whatever you want so long as he is successful.

The guy a military badass. He also has a long history of being an elected politician. He is also a free-market guy.

Job one: kill the narcos. Job two (while doing job one:) take the reins off the economic engine of Brazil.

Remember, this is the nation that produced and exported great airplanes. Now it exports mostly raw materials and poultry.

Try getting a PC in Brazil. You can’t. Maybe now, Brazilians will be unleashed to join the world economy. Their future looks a lot brighter than Europe’s, where an Islamic-led civil war will soon rage.

I’ll reserve judgment until our resident “modest bon vivant” and rabid NeverTrumper weighs in with the “correct” assessment. I wouldn’t want to be called a liar. He should be here soon to spread the love and good fellowship.

His real victory is having survived the knife attack. Hopefully everything from here is relatively easy.

And it beats having your entire country run out of a prison cell like a mafia family.

Glenn Greenwald (who lives in Brazil) warned against comparing him to Trump:

Secondly, I’ll be damned if I take my first impression (admittedly I know little about this) from nbc and a huge anti-trump site. The headline is loaded to get anti-trumpers on board for clicks. It’s clickbait at best.

Greenwald is a hack. You predict what he’s going to write before you even read it.

If he follows through on his pro gun policies, it would be a huge test case at a time when violence is growing worldwide. I expect a lot of pushback against the policy by US antis.

I know nothing about the gentleman, but he sounds like another professional swamp denizen, just one not quite as rabidly left-wing as the Brazilian norm. Nothing particularly Trumpesque about him.

Consider where he is: it is the Third World.

So far, so good. This guy just might pull off an economic miracle, if by doing nothing else than cutting the economic stranglehold of the leftist government on its citizens.

From the balcony of BuzzFeed’s São Paulo office right now, you can hear screams of “Ele Não” echoing through the city’s winding avenues. It’s the same phrase I’ve seen graffitied all over the city this month. The same one I heard chanted from restaurants and bars all afternoon. It means “not him” — him being Bolsonaro. But his victory tonight isn’t a surprise. He’s just one more product of the strange new forces that dictate the very fabric of our lives.

“Not him” is strangely equivalent to “NeverTrump” opposition to our own fake swamp drainer. Bolsonaro supporters are populists who, like their American brothers, are mysteriously drawn to a lying authoritarian selling wet dreams.

Well, surprise: they have their own version of CNN and NBC and GOPe rats: there’s probably one bar in the city feels that way, when millions are celebrating, having swept Jair into office.

Eventually we’ll find out those ‘bar patrons’ were on soros’ payroll.

Libertarian is good. Minority regimes may work. However, throughout the world, people are moving to the center. Welcome, Brazil.

It beats leftist fascism and genocide – which Brazil was headed for.