“I was surprised by how vocal he was about how much he liked beer,” Trump says of Kavanaugh. 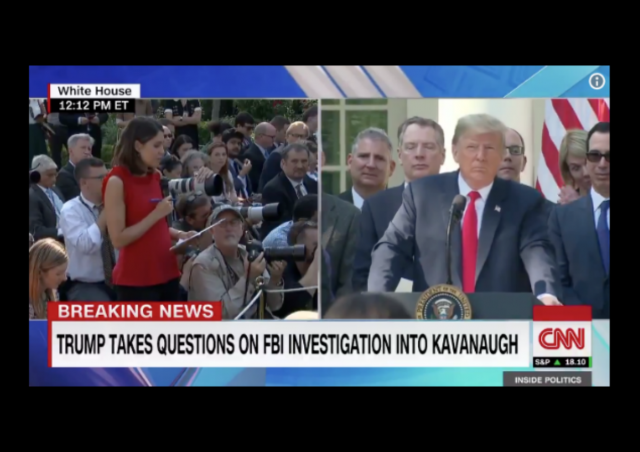 Once the conversation was opened to the press, questions were directed toward Kavanaugh and the new FBI investigation.

Classic Trump in the Rose Garden:
Called the Media Democrats.
Called Blumenthal out on stolen valor.
Called Booker out on admitting to groping.
Called Feinstein out on holding Prof Ford’s claims, then leaking them.
Called Senators out in general for being drunk and belligerent.

President Trump: “I’m not a drinker. I can honestly say I never had a beer in my life… I never had a glass of alcohol. I’ve never had alcohol… Can you imagine if I had? What a mess I’d be. I would be the world’s worst. I never drank, OK?” https://t.co/QxLhFXkboB pic.twitter.com/CZ3ndjSZsV

“I was surprised by how vocal he was about how much he liked beer,” Trump says of Kavanaugh.

Despite reporting to the contrary, Trump indicated the White House has not directed the FBI to limit the scope of its latest investigation into Kavanaugh. He did clarify, saying the FBI was directed by the Senate, and that the scope of the investigation was defined so as not to start yet another witch hunt:

President Trump on the FBI investigation into Brett Kavanaugh allegations: “I think the FBI should do what they have to do to get to the answer” pic.twitter.com/Js3fSFvGlA

Trump on whether Supreme Court nominee Brett Kavanaugh should be interviewed by the FBI: “I think so. I think it’s fine if they do. I don’t know. That’s up to them” pic.twitter.com/AhNyK48nzC

Trump says it wouldn’t “bother him at all” if the FBI interviewed all three of Brett Kavanaugh accusers pic.twitter.com/0SEfw68uH2

“They’re loco” Trump says of Democrats. “I use that word because of the deal with Mexico.”

This thing is going off the rails

Trump says he calls Sen. Blumenthal “Da Nang Richard” in honour of Blumenthal’s lies about serving in Vietnam. This is all pretty somethin’.

Trump’s press conferences are never not hilarious, not only in content but in how much he upsets the media by just being himself.

You can watch the full press conference here:

Someone tell Budweiser. If you like beer you must be a rapist by Democrat calculus.

I like the “I’m sorry I wasn’t thinking.”
“That’s OK. (pause) You never do.”
Then she doesn’t understand that she had just been insulted.
around 51:20