Top Chinese Bank to Halt Iranian Payments Ahead of US Deadline

Top Chinese Bank to Halt Iranian Payments Ahead of US Deadline

State-owned bank acted as main conduit for transactions to Iran 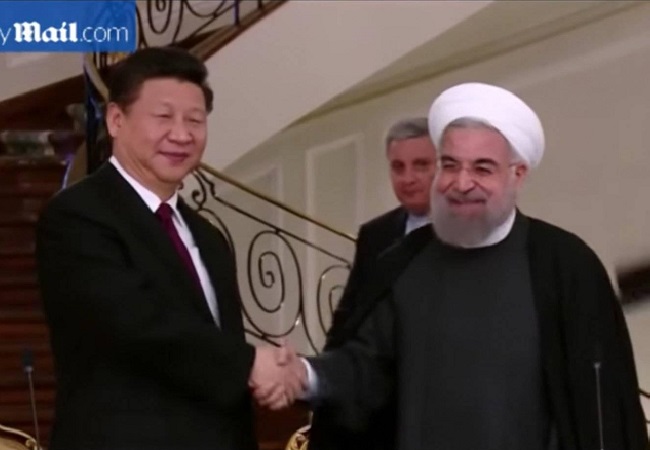 A leading Chinese bank, which acted as the main conduit for payments to Iran, is halting financial transactions with the Islamic Republic, Reuters news agency reports. The state-owned Bank of Kunlun’s decision was made “under pressure” of impending U.S. sanctions due to take effect early November, news reports disclose.

With other oil importers pulling out in the wake of impending U.S. sanctions, Tehran is counting on Beijing to keeps its oil-based economy running. So far, China has officially refused to cut Iranian oil imports.

Bank of Kunlun Co, the key Chinese conduit for transactions with Iran, is set to halt handling payments from the Islamic Republic under pressure of imminent U.S. sanctions against the country, four sources familiar with the matter told Reuters.

Kunlun, the main official channel for money flows between China and Iran, has verbally informed clients that it will stop accepting yuan-denominated Iranian payments to China from Nov. 1, said the sources, who include external loan agents and business officials who trade with Iran.

The bank, controlled by the financial arm of Chinese state energy group CNPC, had already quietly suspended euro-denominated payments from Iran in late August, the four sources said, declining to be named due to the sensitivity of the matter.

The move is yet another success for President Donald Trump’s strategy to isolate Iran. His decision to withdraw from the 2015 nuclear deal and reinstate sanctions on the Shi’a Islamist regime has forced major European companies to pull out of investments and end operations in Iran. “These are the most biting sanctions ever imposed, and in November they ratchet up to yet another level.” President Trump tweeted in August. “Anyone doing business with Iran will not be doing business with the United States.”

India, the second biggest oil customer for Iran, is also cutting Iranian imports. Japan and South Korea are expected to halt all oil imports ahead of the November 4 deadline set by the Trump administration. Both India and China are still hoping to secure Obama-era waivers to buy cheap Iranian oil ahead of that deadline.

The sanctions imposed by the Trump administration have triggered an economic crisis in Iran. The country’s currency has lost 140 per cent of its value since June. Things have turned so bad that the regime is resorting to publicly executing currency traders on charges of “disrupting the economy.”

Iran’s deepening economic woes are fueling a fresh wave of popular unrest against the regime. Since January, ten cities — including country’s capital Tehran — have seen large anti-government protests, with demonstrators clashing with the police and calling for an end to the 40-year-old Islamic autocracy.

Some people are so stupid they can’t tell a sanction from a protectionist tariff.

This is “libertarian” China being educated about what happens when utopian idealism meets reality. The very founding of America was a rejection of your brain-dead “libertarian” ideals of global mercantilism. China is relenting to the reality of what happens when the most powerful economy in the world with the most powerful military in the world starts playing the mercantilism game: “dem with da guns make da rules”. We are clearing the decks of “libertarian” idealists who believe that you can win a war without fighting. Now get back to your little echo chamber of idiots. Winning BIGLY!!!!

America was founded on market economics and the ideals of property rights vested in individuals and their businesses.

I don’t have any notion of where from your butt you pulled “libertarian” or “mercantilism” in connection with me, who espouses Hayekian market economics.

But you’ve been insane and inane for years. I remember you telling everyone the TEA party and OccupyWhatever had a LOT in common. I also remember pointing at you and laughing…

Good grief. In the many years I have had to suffer your opinions, you have utterly failed in promoting your arguments as legitimate. Yet you persist with the same obnoxious arguments while bludgeoning everyone who disagrees with you with the obnoxious lie of being liars.

Okay you win. You are the ONLY true conservative. The rest of us are just frauds, liars and pretenders. Here, take your little trophy and your party of ONE VOTE to the Forum where you can rule your little kingdom. Better to rule in hell than to serve in heaven eh? LOL.

I didn’t call you a liar.

There’s nothing “obnoxious” about noting an economics moron when one presents, as you have here.

Seriously, you don’t know a sanction from a protectionist tariff. That’s remarkably stupid.

This wouldn’t be the first time America is right and the rest of the world is wrong.

The UN is so useless.

It would be so easy to cripple Iran, take out a bit over 40 hydroelectric and water reservoirs. Iran has repeatedly been behind terrorism, it would be quite entertaining seeing them finally paying for their actions.

Good thing the Immortal Iron Fist is guarding that bank.

the ‘mullets’ were chanting ‘death to America’.

we do not need to fight them militarily when economically works better.

even our frenemies help us with the sanctions.

this is what happens when we have a hardheaded business doing the business of peotecting the USA.

China is getting even though, they’re funding the Honduran caravan via Venezuela.