Not just one to “give us cover” 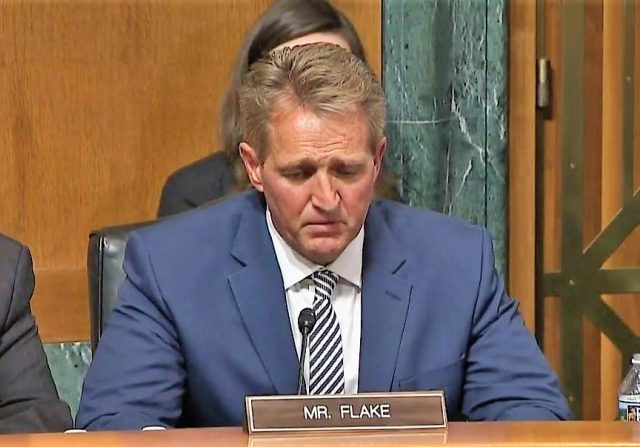 You knew it was coming.

Sen. Flake just said he is having discussions with the WH counsel to push for a more thorough FBI investigation, not just one to “give us cover.”

Jeff Flake says he wants the FBI to do a "real investigation" on Kavanaugh: "It does no good to have an investigation that just gives us more cover, for example. We actually need to find out what we can find out." (via ABC) pic.twitter.com/RuYjXZeCyM

Flake had this planned all along, as we covered Sunday:

after the Friday deadline is passed, McConnell needs to give a speech detailing the utter lack of evidence against Kavanaugh and it not even meeting the standard of preponderance

He just won’t be satisfied, will he?

Ergo, he’s playing distraction games to kill time and run out the clock.

AFAIK (and Ballotpedia agrees), he’s not running to retain his seat, so in another few months it won’t be his problem.

We used to have a word for people who acted like Jeff Flake is acting now: shirking his duties, avoiding hard decisions, and refusing to stand for his (real) beliefs.

What a louse! He gets his start PRETENDING to be a Tea Party candidate and drops all the way to this low life jerk supporting a horrific smear of a decent man doing REAL harm to him and his family, not to mention totally screwing freedom loving Americans!

I want to murder Jeff Flake, but we can’t all get what we want now can we?

He can’t vote against if he’s dead.

I want Flake investigated for any quid pro quo he might of accepted for his disgraceful behavior.

Shocker! He said he’s not against the nomination and he’s not torpedoing the confirmation, he just wants to make sure we do the due diligence (which they already spent three months doing) …

… and now he’s just waiting out the clock for it to become moot.

He’s trying to EXACT SAME tactic the Democrats are, but adding legitimacy to it by: a) being a “Republican”, b) pretending to support the “process”, and c) pretending to speak for “victims”.

That’s what got the extra limited-time-and-scope “investigation” going, and now he’s asking for longer than he initially agreed to. Next, he’ll ask for a broader scope than he agreed to (which will necessarily require even more time).

Ask for (and agree to) an inch, take a mile. It’s the Democrat way.

Assumption: Flake, weird as he is, is not stupid.
Assumption: There’s nothing more lurking out there for the FBI to discover or we would have heard about it by now.
Inference: The first assumption means Flake knows the truth of the second.

Question: Given the above, why the hell is following this illogical course?

Conclusion: Flake wants a pay off for his vote. He’s stalling until someone, somewhere, meets his price.

Isn’t he lame ducking it? No one’s gonna pay him off.

Maybe he’s trying to line up a bribe aka overpaid NGO job.

Good grief!
I gripe about Repubs because they too often roll on their backs and piddle all over themselves, but this guy has taken it to an insane level.
I want this goofball out of my state.

Fortunately he will be leaving, but not before he inflicts maximum damage.

This was the result of a Thursday PM meeting between Flake, Murkowski, Collins, and Manchin to try to avoid not passing Kavanaugh by getting more info. I don’t honestly understand what more info they need. The case against Kavanaugh was not proven in the hearings, so he should be voted for by most of the Senate, just like most of the Senate voted for Sotomayor and Kagan despite their checkered pasts.

Flake is the epitome of HUBRIS. I don’t know what the Mormon Church says about 1)bearing false witness 2) pride coming before the fall or 3) judging lest ye be judged, but I’d say Flake has done more damage to the country by helping the Democrats SLANDER and LIBEL this good man, Judge Brett Kavanaugh, than he ever did as a Congressman, a Senator or a missionary.