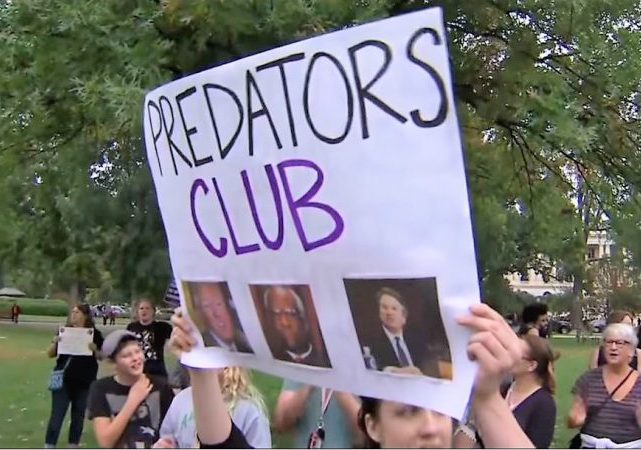 As we continue to celebrate the confirmation of Supreme Court Justice Brett Kavanaugh, it seems rather fitting that a video from a 2017 weekly presser is making the rounds.  It shows House Minority Leader Nancy Pelosi (D-CA) explaining to the assembled press what a “wrap-up smear” is and how it can be used to harm political opponents.

It reads like a template for the base and unfounded attacks on Justice Kavanaugh during—and after—his confirmation hearings.

Pelosi:  They [Republicans] don’t want them [voters] to see that contrast, so they focus on something else.  It’s a diversionary tactic. It’s a self-fulfilling prophesy, you demonize and then [trails off].  We call it the wrap-up smear. . . . You smear somebody with falsehoods and all the rest and then you merchandise it.

And then you [speaking to the press] write it, and they’ll say, see it’s reported in the press . . . so they have that validation that the press reported the smear, and then it’s called the ‘wrap-up smear.’  And now I’m going to merchandize the press’s report on the smear that we made.  [Shrugging and smirking] It’s a tactic.  And it’s, it’s self-evident.

Pelosi begins by explaining the “wrap-up smear” in the context of her claims about Republicans, but her glee is such that it’s clearly a “tactic” that she is happy to use.  Indeed, as you can see from the transcript and video clip, toward the end she shifts from discussing it as a tactic “they” use to one “I” and “we” use.

And here’s the full presser, the above starts at around 24 minutes in:

The press, of course, is complicit in this “tactic.” They no longer bother to check sources or vet information if a report is in any way harmful to a Republican and if checking it would reveal the falsehoods-based smear for what it is; instead, they can be counted on to do their part in “merchandizing” falsehoods fed to them by Democrats and even, as we saw in far too many cases over the past few weeks, gleefully pile on.

From over at PJM…. one woman’s take on the protests and her “embarrassment”. My wife feels the same way.

“Taken from a parliamentary debate in 1912, Viscount Helmsley nailed it.

The way in which certain types of women, easily recognised, have acted in the last year or two, especially in the last few weeks, lends a great deal of colour to the argument that the mental equilibrium of the female sex is not as stable as the mental equilibrium of the male sex….It seems to me that this House should remember that if the vote is given to women those who will take the greatest part in politics will not be the quiet, retiring, constitutional women… but those very militant women who have brought so much disgrace and discredit upon their sex. It would introduce a disastrous element into our public life…it is little short of nauseating and disgusting to the whole sex…”

I see that Democrat activists are of the opinion that they need to get more ruthless. By all means. The GOP may be the stupid party, but I prefer that to the insane party. Plus, the stupids seem to be acting a bit less stupid lately. May the trends continue.

Having people scream in your face, send death threats including beheading videos can bring even the stupidest Never-Trump Senator to the realization that Erick Erickson had which is that Trump is not treating him like an enemy and the Democrat hate him and everything he values.

These same people didn’t understand why people supported Trump despite other things. Shows the average person understands we were in a war and we needed a Patton that might not be our cup of tea in peace time or we were going to be conquered and enslaved.

This is just the “echo chamber” strategy of Ben Rhodes.
– Take a position that’s strange
– Get a bunch of idiots or shills to treat it like a reasonable position
– Quote the idiots and shills as justification that you’re right

The Obama administration used the same ploy on the FISA courts.

P.S. this was also used against Roy Moore.
That’s the purpose of having 20 accusers, 18 of which haven’t actually accused him of a crime: they are manufacturing a herd stampede.

“See? Look at ALL THE WOMEN who are complaining! Surely something must’ve happened!”

Now that I think about it, it’s also a variation on the Fusion GPS tactic of “over-charging” someone; accusing them of something so over-the-top that even “splitting the difference” results in serious charges.

What a bunch of disgusting, evil people Dems are.

An ‘echo chamber’ is best created with the media’s enthusiastic support.
Dems: Look, the Republicans are (fill in name of fake criminal complaint)
Media: Today, the Republicans were charged with (complaint)
Dems: Look at all the stories about the Republican’s crimes!
Media: Dems call for removal of Republican because of his criminal history.
Dems: We will never stop until this known criminal is removed from office!
Media: Calls for the Republican’s removal from office grow, public outcry reaches fever pitch.
Dems: We are bringing charges in the legislative branch, and any Republican who stands up for him will get the same treatment because they’re obviously guilty!
Media: Criminal Republican most likely to be removed from office by heroic Dems willing to stand up for Truth and Freedom. Possible additional criminal Republicans may resist. Report these criminals now, comrades.

A fundraising email I received from the Texas Dem Party over Wendy Davis’ name repeatedly uses the word rage and enraged. This hate and rage which is then followed by pure lies is stunning. These Democrats really are mentally ill.

How this corrupt piece of garbage Pelosi remains without criminal scrutiny is beyond incredible, and says boatloads about the GOPe, and most pathetically, sessions.

Fight fire with fire: but first, fire that rat sessions so we have a Justice department that isn’t in the tank for the likes of the scummy nancy pelosi.

Satan is not yet finished with Nancy. She will do anything to serve her Master.

Fuzzy, my apologies. I cited this video in another thread, not realizing you’d placed it here, before then.

I find this whole concept unethical and therefore deeply offensive.

I’ve seen a lot of commentary where people wonder what lit a fire under Lindsey Graham, and I have to believe he must know of this. It’s enough, or at least it would be for me.

I want an investigation of how this nomination was handled by the Democrats and by the lawyers representing Ford. I want to know who wiped her social media, when, and at whose behest. I want to know whether Ford’s lawyers failed to pass on the Republican offer for a private interview. I want it all out on the table, and I want a person’s name associated with the leak of Ford’s letter.

And WHAT was wiped from her social media.

Saw the Pelosi video early yesterday … I can’t believe she’s so stupid as to talk openly about it on camera – with a clear sense of pride and amusement and not disgust … but apparently her need to impress others outweighs her common sense. Man I hope that clip goes viral between now and 11/6. Let the good people see what a complete slime bag she and the D’s are …

Amusing that she starts out presenting this as a Republican tactic when everyone knows that the key part of the “wrap-up smear,” where a complicit media validates the smear by reporting it as news (the “wrap up” part) is available only to Democrats.

By the end she is just explaining how Democrats run this scam. Haha. Yup, they wrapped this turd up and it ended up on their own doorstep where they slipped and fell on it and couldn’t get up. Hilarious.