Vice Journalist: “There were people who were paid by organizations like Ultraviolet to try to harness that energy in a way that would make the viral moments that we ended up seeing.” 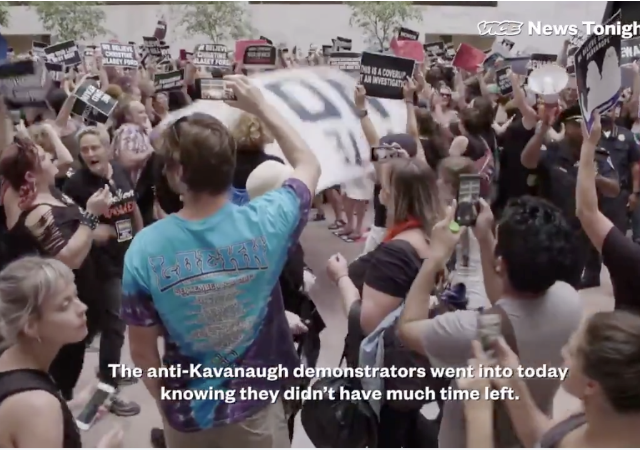 “So, Vice News actually spent a lot of time with the protesters over this past week. We saw the President say these were professional protesters paid by George Soros est. est.,” Karl mocked. “Who were these people, what was going on?”

After talking about following the efforts of a group of Native-Americans talking with Alaska Senator Lisa Murkowski (R), Thomas shifted to talking about those who “organized”. “And that moment with Jeff Flake on the Hill, we talked to one woman who worked for Ultraviolet who was paid. She helped steer people in the right ways to be able to confront senators,” she admitted.

“So, there were paid…” Karl trailed off seemingly dumbfounded as Thomas continued. “There were people who were paid by organizations like Ultraviolet to try to harness that energy in a way that would make the viral moments that we ended up seeing,” she said.

clarification: I said there were some official organizations in the mix who have staff & consultants that were part of these protests. And some of them were helping individuals with tactics. That is not the same as ppl being paid to protest who don’t care about this issue. https://t.co/SZykSAj8Vt

Thomas shared this video from Vice that shows “the efforts of some of these protest organizers.” However, she stressed to Karl that a lot of the protesters “were normal people who were mad.”

We followed women around the Capitol as they tried to confront Jeff Flake about Kavanaugh pic.twitter.com/a3QGq0qoVC

Vice documented how she led a group of protesters through the Capitol’s many hallways to track down and ambush GOP Senators, she even took a group to Senate Majority Leader Mitch McConnell’s D.C. area residence and shouted for him to come out.

“I wanted to make it so that they couldn’t walk, the Senators, couldn’t walk anywhere without seeing one of us,” Byrne told Vice. The video also showed how pleasant she was with Democratic lawmakers but would crank up the emotion on a whim, seemingly coming to the point of tears, when confronting GOP Senators. Not the best evidence against the President’s claim.

Thomas pointed out the protesters who swarmed Sen. Jeff Flake (R-AZ) on the Hill before the Senate Judiciary Committee voted to send Kavanaugh’s confirmation to the floor.

Remember, Flake said he would vote for Kavanaugh. Right before the vote he caused a stir when he announced he would vote yes in the committee, but not on the floor unless the FBI investigated the sexual abuse allegations against Kavanaugh. Many have pointed to the protesters as the reason for his about face.

The elevator confrontation that happened before Republican senator Jeff Flake's call for an FBI investigation into allegations against Brett Kavanaugh https://t.co/IZc5XtKW5A pic.twitter.com/kZCECxxB2u

Thomas said Vice “talked to one woman who works for UltraViolet who was paid — she helped steer people in the right ways to be able to confront senators.”

Previous reports claimed that women who confronted Flake and other politicians at the airport belong to the group Center for Popular Democracy.

Here is link to Center for Popular Democracy 990 filed for being a tax-exempt 501c3 but it has a lobbying 501c4 arm. Images from the salary and contributions page. The elevator protester was coexec director Ana Maria Archila https://t.co/TwfJt3wYSS pic.twitter.com/KTXgTX4ibB

WELL! I guess my adult children made a terrible mistake by going to law school, engineering school, etc!! Who knew that they could make so much money without any credible educational credentials!

In other words, performers paid to put on a good show for the cameras. To the extent that they try to hide it, it’s video astroturf.

Nothing illegal about it; just routine D’rat deception and sliminess.

I do wonder who’s paying the bills.

notamemberofanyorganizedpolicital in reply to tom_swift. | October 9, 2018 at 5:36 pm

Just what Hitler did!

Has LI seen this fraud going on in upstate New York?

It’s a species of fraud, designed to give lawmakers a false impression of what voters think. If this were funded by China, it would be an act of war.

When a crying woman is screaming at you “if you vote for him that means you don’t care about me” there’s way to respond. It’s an irrational statement. You can’t reason with her but if you ignore her then you’re insensitive. What she did is wrong.

The time has come to unionize these paid protestors. If they are going to do it for a living, they are entitled to paid healthcare, a pension plan, a living wage and workplace safety rules. Let’s see how they handle being replaced by illegals at sub-minimum wage pay.

I’ll bet the IRS would be interested in knowing whether they are paying their taxes on this income.

Would so like to see photos of the paid protesters highlighted and doxxed … more damning even if the same protester could be id’d at several protests in different states.

You think this is new? Not hardly. They admit they’ve been doing exactly that.

“clarification: I said there were some official organizations in the mix who have staff & consultants that were part of these protests. And some of them were helping individuals with tactics. That is not the same as ppl being paid to protest who don’t care about this issue.”

Note the sudden introduction of the straw man of “ppl … who don’t care about this issue.”

There’s a saying on the left that I found echoed in places related to education, public policy and non-profit management: “Doing well by doing good.” IOW, do what you believe in AND make a nice living.

That whole “clarification” is just an attempt at muddying the waters. In the realm of lies, damn lies and statistics, it comes pretty close to the second category.

notamemberofanyorganizedpolicital in reply to irv. | October 9, 2018 at 5:38 pm

Are people actually persuaded in the direction the activists desire or are people looking at these over the top performances as just Youtube Jackass videos by circus geek wannabees?

Paid protesters and agitators goes back as far as the Unionization movement of the early 20th Century. And it has been used nearly continually since then. It was used to great effect during the Vietnam War protests. What is always interesting about these protests is whether the media exposes the fact that they are directed by paid agents. Traditionally, the media fails to mention the existence of ANY paid agents involved in a liberal demonstration while literally screaming that any conservative demonstration is wholly composed of paid activists or card-carrying members of radical organizations.

Paid for a #PumpkinSpiceRiot (from an article by Daniel McCarthy at Spectator.us …”The protests liberals whipped up against Kavanaugh this weekend, on the other hand, revealed too much about their own weakness. Washington, D.C. is a majority Democratic city with a black majority. But the Democratic voters out there yelling about Kavanaugh were as white as any country club gathering of Republicans. They looked like a line of Starbucks patrons — Caucasian, professional, largely millennial, with earth tones and earnest expressions aplenty. Men and women wore the same fashionable glasses and more or less the same clothes. It was a Pumpkin Spice Riot.”

notamemberofanyorganizedpolicital in reply to deuxlakes. | October 9, 2018 at 5:39 pm

Wall Street Journal did a story about the money involved the other day.

Saturday’s protests and unlawful disruptions were brought to us by a well-funded network.

To paid activists: Kavenaugh is old news, “Your fired”

They are paid to comment on blogs as well. Not hard to pick out the paid proggies.