“Actually, when the president found out that I was Indian American he asked me if I was from the same tribe as Elizabeth Warren.” 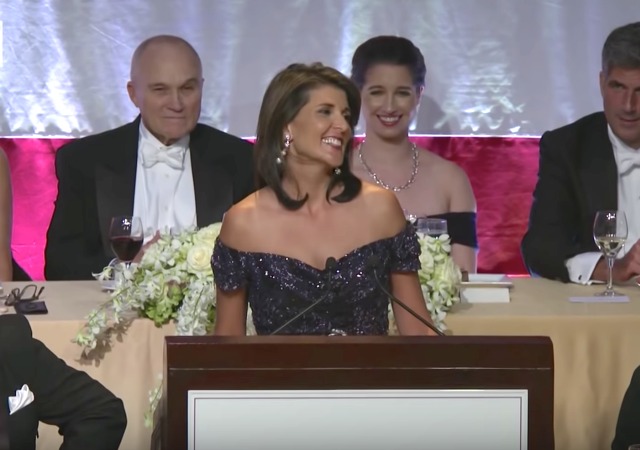 “I do understand why you invited me. Two years ago President Trump was here and he made some waves with his remarks — apparently no one here could have predicted that,” Haley told the crowd. “So last year you went with [House Speaker] Paul Ryan, who’s a Boy Scout, and that’s fine but a little boring, so this year you wanted to spice things up again, right? I get it. You wanted an Indian woman, but Elizabeth Warren failed her DNA test.”

Warren faced backlash for misrepresenting her Native American heritage after a DNA test showed she is likely between 1/64 and 1/1,204 American Indian. Conversely, Haley’s parents immigrated from India and after she was elected governor, she became the first Indian-American to hold office in South Carolina. (RELATED: Elizabeth Warren Defends The Release Of Her DNA Test)

“Actually, when the president found out that I was Indian American he asked me if I was from the same tribe as Elizabeth Warren,” Haley joked.

That is incredible. Hilarious. Real humor, not bashing and vulgarities like you see at these sort of functions directed at Sarah Sanders and Trump.

That’s the difference between Republican humor, and Dimocrat humour*.

*Dimocrats are, of course, much more worldly; so it’s “humour”, not the low class American “humor” of Republicans.

I hope I’m still around when she’s POTUS.