NBC News sorry, not sorry after misrepresenting Trump comments about Grant and Lee

NBC News sorry, not sorry after misrepresenting Trump comments about Grant and Lee

Firing up the leftist online mob, then issuing a “correction” two days later 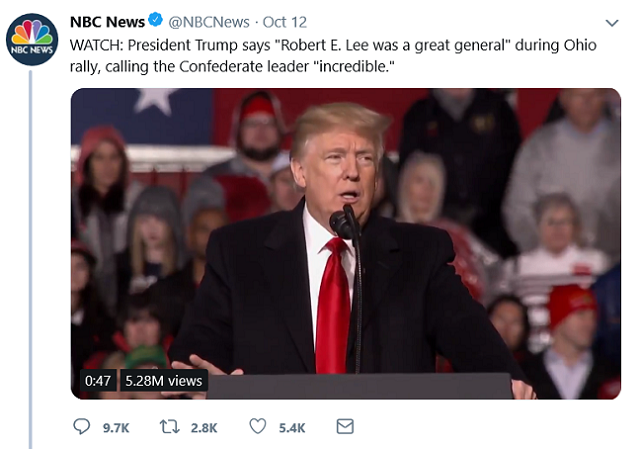 Case in point, President Trump visited Ohio, the home of Civil War General and later our 18th President Ulysses S. Grant, and delivered a somewhat rambling story about General Grant being a great general despite liking to drink.  During this story, Trump referred—in passing—to General Robert E. Lee as “a great general.”

Nothing about the speech—where it was made, its content, theme, or intent—can be seen as remotely singing the praises of Lee, yet NBC, along with other leftstream media outlets, ran with the clickbait #FakeNews they fully understood furthered their favorite narrative that “Trump’s a racist!  Watch him praise a racist general. Because white.  And privilege.  And racist!”

To make this work, they literally had to misread and misrepresent the president’s first sentence and then cut off the speech a few sentences later.  Further, they had to be grossly negligent in fact-checking, grossly ignorant of basic American history (and not know how to read Wikipedia), and they had to have a reason to grossly edit and misrepresent President Trump’s comments. 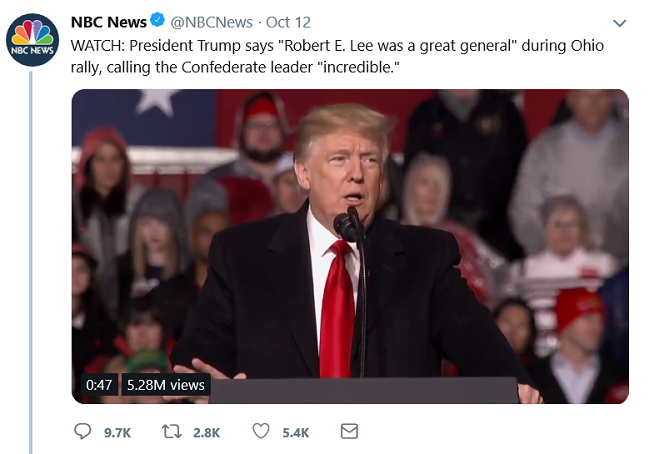 The problem?  Trump was in Ohio talking to his supporters in Ohio about General Grant . . . who was born in Ohio.

Here’s the rest of the president’s comments (via AG_Conservative on Twitter): 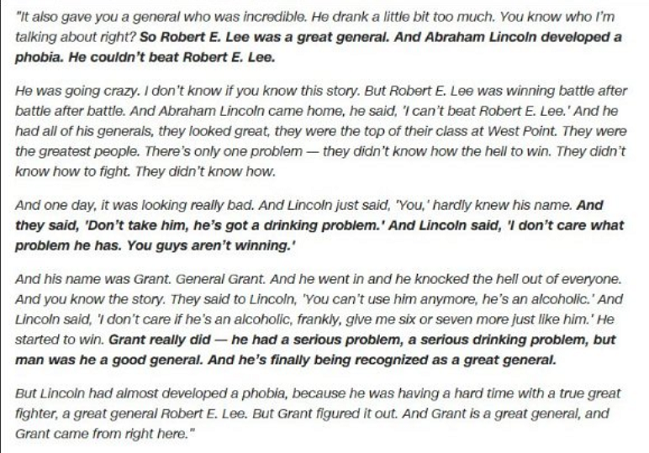 President Donald Trump spoke in Ohio Friday night, telling the story of how Ulysses S. Grant defeated Robert E. Lee’s forces during the Civil War. Naturally, the media couldn’t wait to turn this into a claim of racism against Trump.

Multiple outlets — especially NBC — tweeted edited clips or quotes from Trump’s speech to claim he was “praising” Lee. Because, racism and white supremacy, you know.

. . . .  But Trump didn’t come to the home of Grant to praise Lee. His story was about how Lee was a great general (a fact undisputed by historians) and Grant really wasn’t, but he was still able to defeat the South’s army.

Trump also never called Lee “incredible,” as NBC claims. Trump was talking about Ohio, which “also gave you a general who was incredible. He drank a little bit too much. You know who I’m talking about, right?” Everyone in Ohio would know who he’s talking about.

But then Trump starts talking about Lee, which was probably confusing for a press determined to paint him as a racist.

This headline is appalling. Not only is it unfair and in bad-faith, it completely misrepresents what was said. Gotcha journalism at its worst. https://t.co/If9V7fAZUU

It's insane how predictably dishonest the media is…

All I needed to see was that the clip cuts off halfway through the story to know they were intentionally leaving out context. https://t.co/1uqzR9C0CJ

NBC News did finally acknowledge that they had published a “misidentification” of the president Trump called “incredible.”

CORRECTION: An earlier tweet misidentified the general President Trump described as "incredible" at a rally in Ohio. It was Gen. Ulysses S. Grant, not Gen. Robert E. Lee. An attached video clip lacked the full context for Trump's remark. Here is the full clip. pic.twitter.com/NZHj3Q2dHL

But the “narrative” was furthered, and NBC knows it.  The mob has been fed more lies and are unlikely to see the correction.

At least you ran a correction, but clear damage already done.

This crap happens over and over, every day. It permeates who and what you are . . . and Americans are SICK of it.#fakenews #FakeNewsMedia

The president, for his part, very graciously accepted the correction.

Very smart move by Trump. Thank them for the correction, thereby drawing more attention to it from his own feed.

Never try to out-troll a master. Never. Ever.

And I’m not even gonna say anything about how his story about Grant is pretty whack. It’s like that line in Animal House, “Germans? Pearl Harbor?” “Shh, don’t stop him, he’s on a roll”.

Lincoln was freaked out by Lee, and everyone in the Washington military establishment hated Grant, that much is true.

Do people still watch network news? Are these people also using dial up internet and watching Cheers and Family Ties on Thursdays?

It is easy for NBC to make this type of mistake. After all, both Lee and Grant are just a couple of old, dead white dudes (to paraphrase Bill & Ted).

Funny, Bill and Ted sound a lot like your average collectivist SJW for that one turn of phrase.

What used to be Stoner Talk has turned into mainstream Leftist Political Philosophy. That ain’t Bill and Ted’s fault, dude.

True…they do have very different meanings of the word “righteous” too.

While old white dudes were calling the shots, America grew and prospered 🙂 All we have to do is look at the Middle East, and Latin America as examples of what happens where there are no old white dudes to keep things running efficiently 🙂

I attended the rally, it was about 90 miles from my home. On the way home, I said to my wife and son that the headlines would be that Trump praised General Lee, explaining that it was factually correct but fake news. Sure enough, that was the story. I wouldn’t be surprised that the reason for the story was to bait the msm into what they did. They are so dumb and predictable!

I’m astonished that saying Lee was a great General is viewed as some kind of horrendous gaffe. If it is, then better not mention another famous slave owning general — Mohammad.

Lee was defeated largely by logistics; the South could not compete with the industrial might of the Union. Had the supply situation been fairly equal, the South under Lee’s generalship might very well have been able to win, or at least have been in a position to negotiate an equitable truce instead of an unconditional surrender.

“they had to be grossly ignorant of basic American history”

You mean they’re completely ordinary high school and college graduates? Yes, that is a bad thing but what can you do?

Never take seriously the remorse or apology of a sociopath: it’s merely a continuing tactic of manipulation.

JusticeDelivered in reply to notamemberofanyorganizedpolicital. | October 14, 2018 at 8:35 pm

MSM caters to the dredges of American society.

And Rommel was definitely a Nazi. Perhaps a little weak in the anti-semitism department, but a devout Nazi none the less. But, he was given a choice of committing suicide or going on trial for his part in the attempted assassination of Hitler. He committed suicide to spare his family from disgrace and persecution.

Maybe we should go full Bolshevik and airbrush Lee from our history and OBTW kill everyone who ever heard of him.

“Maybe we should go full Bolshevik and airbrush Lee from our history and OBTW kill everyone who ever heard of him.”

I think that is what they have in mind…..if they were really honest. #Evil

Oh, the leftoids can probably salvage something from this crash & burn. Some intrepid researcher will soon pop up with the news that when Hiram Ulysses Grant married Julia Dent, his best man was James Longstreet . . . who later commanded Lee’s center at Gettysburg. And if that doesn’t establish Grant as practically a Confederate, then our sleuth can reveal that years later, the widowed Julia would visit her husband’s tomb on Sundays, generally accompanied by . . . Mrs Jefferson Davis. How much more Confederate can one get?

Of course, said sleuth might also note “the news that when Hiram Ulysses Grant married Julia Dent,” he acquired 4 slaves on a farm in KY that was part of her dowry…. and since Kentucky didn’t officially rebel, they were unaffected by the Emancipation Proclamation. The Grants didn’t manumit them; they remained slaves until the ratification of the 13th Amendment.

Lee was such a great general that Lincoln offered him the command of the union forces.

his military standing aside, lee was a man of character and honor,a patriot–cannot say the same of grant and his minion sherman–the atrocities endured by the south under the guise of ” reconstruction ” were too numerous to catalogue–and persecuted against american citizens–lincoln could have prevented the war but he was too weak–in the end, he paid the ultimate price for his weakness