Most Polls Have Close Results in FL Governor, Senate Races, But CNN has Democrats Up Big

Most Polls Have Close Results in FL Governor, Senate Races, But CNN has Democrats Up Big

How does this happen!? 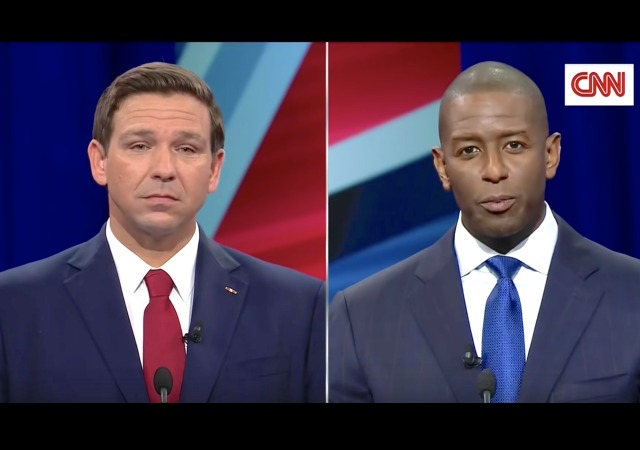 A CNN poll has Florida Democrats up in the gubernatorial and Senate races, but I’m really shaking my head with the governor one.

Somehow the CNN poll has Democratic nominee Andrew Gillum up by 12 points over Republican nominee Ron DeSantis while other polls show Gillum with maybe a 1 point lead. Seems a little off, doesn’t it?

The poll took place between October 16 and October 20 and reached out to 1,012 respondents in Florida. 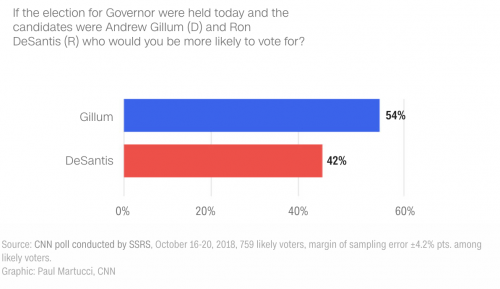 DeSantis immediately railed against the poll, especially since CNN released the poll before the debate between the two men on Sunday. From Florida Politics:

“This poll is as amusing as it is suspicious in that it was released hours before a debate between the two candidates–clearly meant to give the advantage to Andrew Gillum,” said DeSantis surrogate Stephen Lawson.

That NPA turnout, DeSantis officials say, also seems unrealistically high, as independents have never outnumbers Democrats and Republicans at the poll in a Florida statewide election. And in the past four general elections, Republicans outnumbered Democrats at polls.

DeSantis may have a point because when you go to RealClearPolitics, it shows Gillum with an average of +3.7 lead.

A St. Pete Polls poll taken between October 20 and 21 only found Gillum with a 1 point lead. This firm, which is located in Florida, reached out to 1,575 likely voters in Florida.

Cook Political Report still has the governor’s race as a toss-up. 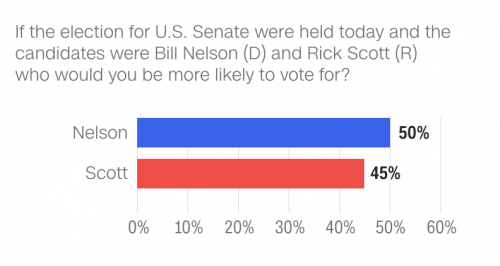 Like I said this one doesn’t have me shaking my head as much as the governor poll, even though the numbers are off compared to other polls. Plus, in this poll, voters aren’t as certain as they are in the governor’s race and Democrats have softer support. From Florida Politics:

Among registered voters, 81 percent have their mind made up but 15 percent could still change their mind. Among likely voters, 86 percent feel certain on their choice but 11 percent still could change.

The St. Pete Polls poll, which was taken on October 20 and 21 like the governor poll, has Scott ahead by almost 1 point.

Polls from September 17 to September 30 and September 24 to September 27 had Nelson with a 1 point lead. RealClearPolitics gave Nelson an average of a 1.5 point advantage. Cook Political Report has the race as a toss-up

If the Democrats and Progressive Lefties were all sitting together on a designated blue side of a stadium, it would be CNN standing up first to start the “WAVE”…which is no indication of the actual winning team on the field.

What should be disturbing to all of us here is that such a far left, America hostile candidate as Gillam could be polling at credible numbers at all, much less roughly a tie. Hart-Cellar is paying its evil dividends, year after year, and still our turnout is less than 95%.

He is being promoted as Floribama by the democrat media. DeSantis appears to have hired Jeff Sessions as his campaign manager.

Similar polling shenanigans are being done in neighboring Georgia where Stacy Abrams is the Gillum counterpart. Abrams is as loony left as they come; yet polls have her and the GOP candidate neck-and-neck.

most polls don’t make sense these days. Everyone is happy with the economy but the party in power gets no benefit from it? FL supposed to be a 5pt/12pt race but Minnesota is 6pt?

I don’t think any of these guys know what’s happening and we’re going to be surprised again in Nov. Celebration or commiseration I can’t say but surprised nonetheless.

“How does this happen?” is a more polite rendition of my first reaction to the headline.

Moreover, until silly season started, ‘florida man’ were the big stories making the headlines – not unhappiness with Gov. DeSantis. It was my limited understanding that the governor was fairly popular.

I’m confused as to how a former mayor, leftist loon, like Gillum, can competitively poll at all!

Apparently, florida man is now employed at CNN as an analyst, but has he also populated Florida with that many ignorant bastage children??

Polls, especially those conducted by or with the cooperation of Main Steam Media, are nothing more than political weapons to try to influence voter turnout. The mainstream media is nothing more than the press wing of the Democratic Party and their polls show as much.

Just like in 2016 most of the polls showed Hillary with a landslide, the few polls that were actually closer to being correct were done not my MSM or the big polling companies, but by smaller independent polling agencies and were mostly regional.

DeSantis ‘The Phantom of the Rotary Club’ is channeling Neil Cavuto in his non existant campaign. He can easily lose.

How can you be “Undecided” and “Already Voted”? Wouldn’t that mean you couldn’t make up your mind and either didn’t vote in that race or randomly picked?

I remain mystified by the media’s love of polling as if it were precise and accurate reporting of the news. Each time a poll is proven wrong it is as if it never happened and the next poll cites how accurate it has historically been.

I’m not at all surprised at their love of polling; it isn’t as if they are any more interested in the accuracy of their polls than the rest of their propaganda. It’s like their love of “scientific” tests such as Blasey-Ford’s polygraph, and now Warren’s DNA test. Because, science!

Polygraphs don’t detect lying. They detect psychophysiological responses to the questions; heart rate, blood pressure, respiritory rate, and skin conductivity (perspiration). Nobody really has a clue as to whether or not these reactions indicate lying. Maybe in some people, but it’s impossible to say in whom it does and in whom it doesn’t. And then you throw in the fact that each examiner scores the results differently based upon their own subjective standards and all you have is a hot mess.

Sociopaths, congenital liars, and spies trained by foreign intelligence services pass these tests with ease. If you asked a spy trained in counterpolygraph techniques if he killed Lincoln, and then asked if also killed JFK, the box would say he’s telling the truth.

DNA tests are even more inaccurate. That is, when used illegitimately such as to prove ethnicity. They reliably prove lineage such as direct paternity or to convict (or clear) someone of a crime such as rape, etc. But ethnicity? Only to the continental level. So Warren’s test proved the vast majority of her DNA was from Europe. You know, all I need is a mirror to determine what continent the vast majority of my ancestors are from.

And the DNA evidence didn’t prove anything regarding American Indian ancestry. Because it can’t. Certain D9S919 are found almost exclusively in Native Americans. This is a short term repeat marker found on the ninth chromosome, i.e pairs of nucleotides repeat. But the same values can be found in people from far east Asia. I can’t look at the results any more as the Boston Globe tells me I’ve used up all my free articles.

Other than some very rare exceptions all the DNA sequences can be found in populations across the globe, just at different frequencies. So Bustamante used the “next best fit” analysis to say the results identified certain DNA sequences that “suggest” or “strongly support” a native American ancestor. But not prove it; he never used that language. Because what he’s identifying a could well be Germanic or Gaelic. Just because those aren’t the reference populations he identified as the “bucket” that was the next best fit doesn’t mean she didn’t inherit them from a different population.

So why does the median love polling? They were trying to elicit a response from DeSantis supporters.

Fake news, fake polls. With CNN, you can have it all!

I wonder how many Puerto Ricans are voting in Florida this time around… they are used to Dem Party handouts.

I would have made PR an example of major USA rebuild to test out EMP attack repair….

It amazes me that various Democrat candidates are even in the running when they are carrying enough baggage to sink a super tanker. I know the MSM does their job covering for them, but it still says a lot about the sort of people that vote Democrat.

May I have posted here many times you were going to get burned by the Democrat-Pollster game and you just keep doubling-down on stupid with comments like how a CNN polls could be this far off.

I intend to come back here and remind you of the utter foolishness you were saying in July till now when the Red Wave comes in.

I have lived in FL since 2000 and every poll, in every election, shows the Democrat winning. Jeb Bush was supposed to lose to a Tampa lawyer for governor. Charlie Crist, when he claimed to be a Republican, ran for governor and was supposed to lose. Rick Scott in both elections, sure thing he would lose. Marco Rubio, same thing – both times he was going to lose, especially last time versus a black candidate, was going to lose. Anyone see a trend here? The local Tampa Bay Times / fishwrap has endorsed 99.9% of Democrats running.

97% chance of Hillary winning, hopefully their math sucks as bad as it did a couple of years ago. My guess is most Republicans are too busy working to bother with being polled, did it myself earlier today.

I live in FL. I got a call from a poll today and decided to see what they asked me. The first question was – Are you a Democrat (enter a 1) or a Republican (enter a 2). I entered a 2. The call disconnected.

You should have entered 3 and made their computer explode.