The story is in the polling trends 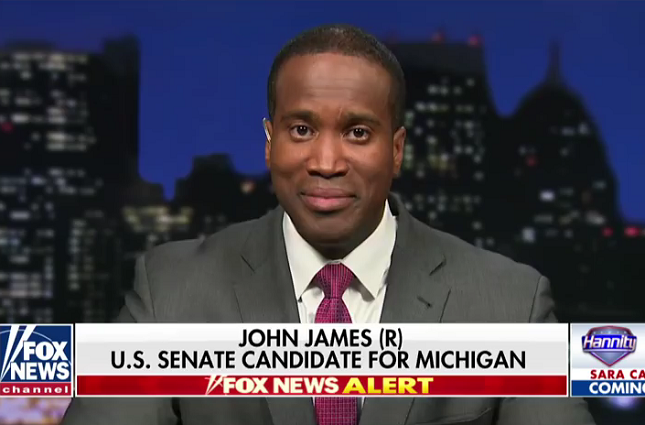 The post-Kavanaugh electoral map has not been kind to Democrats — challengers and incumbents alike.

On their own, polls are not particularly helpful, but it’s the trends that matter. As with many other national races, the polling in Michigan is rapidly trending in James’ favor.

Take a look at the Real Clear Politics poll trend: 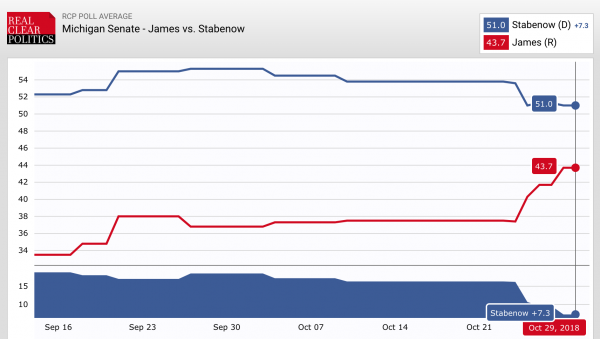 James, an Iraq War veteran, is now trailing the incumbent by roughly 7 points, according to the latest Real Clear Politics average of polls.

The split is similar to the race in Texas, where Democrat Beto O’Rourke is trailing incumbent Republican Sen. Ted Cruz. Like O’Rourke, James remains the underdog.

But unlike in Texas, the polls in Michigan reflect a steady tightening. Stabenow, D-Mich., for months had led by double digits. As of mid-October, Stabenow was 16 points ahead of James, according to an MRG poll.

But an EPIC-MRA poll from late October showed Stabenow with just a 7-point lead, an Emerson poll showed her up 9 points and a new Mitchell Research & Communications poll showed the incumbent leading by 6 points.

Much like Republicans in Texas, Democrats are taking the Michigan challenge seriously, with even former President Barack Obama visiting the state to campaign.

James has seen support from prominent Republicans as well, with President Trump’s eldest son, Donald Trump Jr., and Vice President Pence traveling to Michigan to make the rounds in the hopes of upsetting Stabenow’s chances for another term.

James is the first black Republican to run for statewide election in Michigan in four decades.

Obama didn’t visit Michigan. He visited Detroit. I say it again and again, James has a huge advantage in that this is the first election in Michigan without check the box. People who normally check D will now have to choose between an old white woman they likely have never heard of before and a young charismatic black man who would be ignored if there was a D box. My prediction – If James is within 5 on November 5, he’ll win by a nose hair.

I’ll buy you a 6 pack of beer to celebrate this win if it happens.

Everything I’ve heard and read about John James indicates he’s a man of character, a leader, and one who has his feet firmly planted on the ground. Sure wish I could vote for him. I do, however, have him on my prayer list.

From John James: “I don’t have a black message or a white message, I have an AMERICAN message. I’m living the American Dream, and I WILL protect the Dream for future generations. We need fuel to complete our mission!”

And, “I’m a West Point grad & Iraq vet w/ 2 masters
My dad: Vietnam vet & entrepreneur
His dad: mason
His dad: sharecropper
His dad: slave.
Mooching? My family never asked for free stuff, just a fair shot. We can’t allow the American Dream to be crushed by you, @Stabenow & Socialism”

Wow, no wonder the MSM won’t cover this guy.

He’s a one man existential threat to the entire Democrat Party.

I’ve been calling liberals racist on other sites if they vote for the old white woman.
I’m not real popular with the liberals. Which makes me smile.

That’s awesome. I thought I was the only one.

“You’re a racist because he’s black and you won’t vote for him.”
“That’s okay. I understand. You’re a racist.”
“No. Really. Being a racist doesn’t make you a bad person. You’re just a racist in denial.”
“I know. I know. If John was white, you still wouldn’t vote for him but you’re still a racist.”
“So I wouldn’t have voted for Obama if he was white but I’m still a deplorable racist. I guess, just like you.”
“I have friends that are black too. It doesn’t absolve your racism either.”

Yup. To paraphrase Alinski, “Make your opponent live down to their own rules.”

A huge part of being a liberal is absolute conviction that you hold the moral high ground.

Of course, they never do.

Its annoying talking to them, but its useful and effective to hit them as often as possible on the fact that they are incredibly racist, and incredibly immoral. Just hammer them on that.

While you’re at it, they tend to think of themselves as intellectually superior also. Of course, they never are. I particularly enjoy detailing each and every idiotic mistake they make, then after proving how stupid and ignorant they are – calling them stupid and ignorant to their face.

Difficult to go through life believing you are intellectually superior when you’re getting continually hammered on how ignorant and moronic you are.

That is the only part to a liberal. Years ago I voted across party lines for who I thought was the best person. Then about LBJ things began a’changing. Obama is the peak of righteousness. Disagree and you are a racist, homophobe, or whatever hateful name a Lib can think up. The Holy Press backs their sacred fight in the public square.

the trend is your friend
– BUT, and it is a big but
– the key is the final vote on election day/season

fortunately, turnout is key for the midterms
– go vote for all
– make the dems pay for their perfidy

Yeah, he’s not going to win.

Lot of John James yard signs around here. I saw only 1 Stabenow on my last trip through ann arbor.

The main question is , has the early dead voting started yet ?