“What are the things you’re telling your girls? Which motto do you want them to live by?” 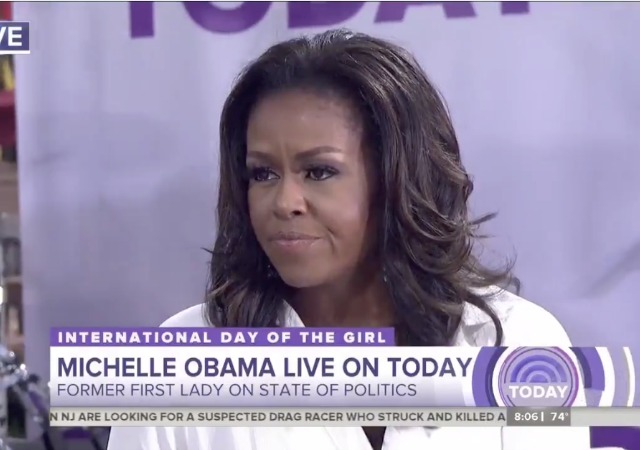 In July 2016, former First Lady Michelle Obama said at the DNC convention, “When they go low, we go high.” Lately it seems the left has forgotten her advice along with failed Democrat presidential candidate Hillary Clinton and former Attorney General Eric Holder.

At a campaign event in Georgia, Holder brushed aside Michelle’s advice:

Hillary told CNN earlier this week that civility cannot come back until the Democrats take control of Congress:

“You cannot be civil with a political party that wants to destroy what you stand for, what you care about,” Clinton said in an interview with CNN’s Christiane Amanpour. “That’s why I believe, if we are fortunate enough to win back the House and or the Senate, that’s when civility can start again. But until then, the only thing that the Republicans seem to recognize and respect is strength.”

Michelle appeared on The Today Show and said that her slogan remains relevant. From CNN:

“We want them to grow up with promise and hope,” Obama added. “And we can’t model something different if we want them to be better than that.”

.@MichelleObama implicitly rebukes @HillaryClinton and @EricHolder for recent comments: “Fear is not a proper motivator.” pic.twitter.com/KwiJMAayvj

But Obama said that’s not the message role models should relay to impressionable young women.

“What are the things you’re telling your girls? Which motto do you want them to live by?” the mom of two girls said. “I have to think about that as a mother, as someone who’s a role model to young girls. We want them to grow up with promise and hope, and we can’t model something different if we want them to be better than that.”

However, there are times the Obamas went low. They just were more eloquent with their words. Here is one example from President Barack Obama in 2013:

So they are suspicious about government’s commitments, for example, to make sure that seniors have decent health care as they get older. They have suspicions about Social Security. They have suspicions about whether government should make sure that kids in poverty are getting enough to eat or whether we should be spending money on medical research. So they — they got a particular view of what government should do and — and should be.

Well, repent and sin no more. Today, her words are wise and conciliatory. And for that she should be acknowledged.

On the other hand… A priori civility may be authentic. Privileged? A posteriori calls for civility are likely bullshit. Uncle!

Clinton and Holder get out and play bad cop. Holder even calls out Michelle Obama by name. Then she comes out and plays good cop.

The game for 2020 is: Vote for Michelle Obama. Only she can end the chaos that is Trump’s America.

notamemberofanyorganizedpolicital in reply to clintack. | October 11, 2018 at 4:47 pm

Maybe Oprah will force Michelle to Run with Her…. LOL

Michele’s first reaction @17seconds is to chuckle about the low/high/kick quotes. Oh, that Eric Holder! he’s such a cad!

And of course the media ask nothing about black bloc/antifa menacing and beating people.

Why give this grifter the time of day–or a blog post?

notamemberofanyorganizedpolicital in reply to Comanche Voter. | October 11, 2018 at 4:48 pm

Good on her. Whatever her motivations, she spoke truth.

notamemberofanyorganizedpolicital in reply to Immolate. | October 11, 2018 at 4:49 pm

Broken Clocks are correct at least two times a day, so…….

Actions speak far louder than words. You can say all the cliche’s and platitudes but the actions done for the Party to whom she is speaking about has not “gone high” and has not, as long as I remember, used fear as their motivation.

Her husband repeatedly spoke about the Republicans as enemies, imagine that, citizens of this once great country are enemies because they hold a far different view of politics than the Marxist narcissist. He talked about bringing a gun to a knife fight. He talked about getting in the faces of Republicans long before it became the fashion statements of Mad Maxine and Cankles Hillary.

So her going around on air is just her beginning bid to see if she can run and get her and Duh One and Jarret back in the White House.

If this Michelle thinks they have ever gone high, they certainly have a bar so low that ants would have a tough time going under it.

Forgive me for my cynicism, but this reeks of a ploy to make Michelle Obama seem like a reasonable centrist.

notamemberofanyorganizedpolicital in reply to SeniorD. | October 11, 2018 at 4:51 pm

Correct. The Communist-Socialist Democrat Party will chew Michelle up and spit her out…..

JusticeDelivered in reply to notamemberofanyorganizedpolicital. | October 11, 2018 at 7:40 pm

What makes you think she is not one of their chief schemers?

TheFineReport.com in reply to notamemberofanyorganizedpolicital. | October 12, 2018 at 3:34 pm

That will take a very long time. And the taste…

Interesting. If I were she, and I wanted to run for president in 2020, I’d deny it to the heavens right now while my fellow Democrats are acting like fools. But I’d start making moderate statements. Especially if everyone were on board. Then, as the election nears, I’d have the key players act contrite and appear to take my advice and “be good”.
I could probably only get away with that kind of kabuki if my husband were, say, an ex-president….. oh wait….

Perhaps her only alternative will be to pull a Jimmy Carter, go out and “do” good works for 20 years before coming back into politics and trying to tell people how to run their lives.

Right now, a good percentage of the American public would cheer at the imprisonment of her husband and Holder and both Clintons – considering them all designated targets for elimination or punishment, whichever came first.

I consider myself a reasonable person, but after awhile I want to see some performance to come either before or after the cute little speeches….and performance is the ONE THING the Democrats lack. They perform just fine, if their goal is to bind America in chains, but other than that they’re just beasts fit for the slaughter IMO. Not much I can do about that at my age, other than cheer loudly.

Odd how the interviewer never took the next step and demand that Big Mike denounce the violence coming from the Democrat mobs.

This particular question was probably specified in her appearance contract.

Moochelle speaks and nobody listens.

Hearing herself, this is the second time she’s proud of her country.

What’s the saying? – You can’t make a silk purse our of an Obama’s ear?