Based on the fashion-focus of the reporters, one can safely assume that Melania Trump’s African tour was a diplomatic success. 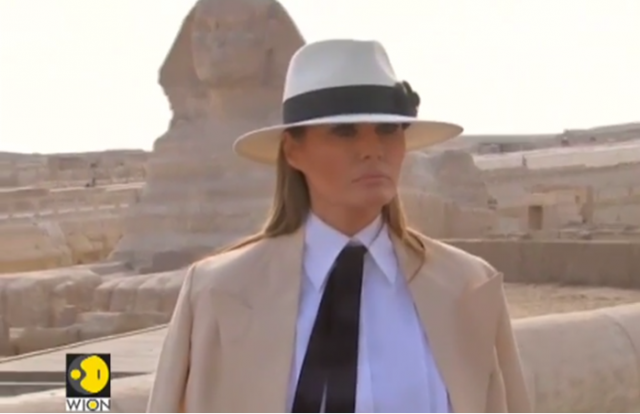 First Lady Melania Trump has spent the last week in Africa, touring during Ghana, Malawi, Kenya and Egypt. The trip was designed to enhance the First Lady’s public profile, generate goodwill, and strengthen the connections between the Trump administration and the leaders of these nations.

The normally-reserved Mrs. Trump used a photo-op at the Giza complex, set in front of the Great Pyramid and the Sphinx, to comment on her husband’s tweets and the Justice Brett Kavanaugh.

Reporters traveling with her as she traversed Africa this past week asked her about the news back home of the confirmation of the president’s Supreme Court nominee, Brett M. Kavanaugh, and the allegations by Christine Blasey Ford that he sexually assaulted her.

…The first lady, who so often comes across as sphinx-like herself and has often remained silent amid the din of her husband’s administration, was unusually outspoken.

“I don’t always agree what he tweets and I tell him that. I give him my honest opinion and honest advice. Sometimes he listens sometimes he doesn’t. I have my own voice and my opinions and it’s very important to me that I express how I feel.”

She met with Egyptian President Abdel-Fattah el-Sissi and his wife, Entissar Mohameed Amer, prior to the Giza complex tour. The visit was related to a US-Egyptian partnership related to a preservation project for the historic landmarks.

The U.S. Agency for International Development has been working with the Egyptian government for the past several years on a project to lower groundwater levels to prevent additional damage to the landmarks. Saline content in the water can erode their foundations.

The first lady described her tour, which took her to Ghana, Malawi, Kenya and Egypt, as “amazing” and said she hoped people would talk more about her visit and less about her fashion choices.

“That’s very important what I do, what we’re doing with U.S. aid and what I do with my initiatives and I wish people would focus on what I do, not what I wear,” she said.

The remarks about her attire were made because Mrs. Trump’s clothing choices are, once again, the center of media hyper-drama. Her fashion crime? Wearing a white-pith helmet that the partisan press has deemed an homage to white colonial rule.

The helmet, which she wore Friday during a safari in Nairobi, was blasted as a “common symbol of European colonial rule” by The New York Times, while CNN said it has “come to symbolize white rule.”

The [U.K.] Guardian said the helmets “were worn by European explorers and imperial administrators in Africa, parts of Asia and the Middle East in the 19th century before being adopted by military officers, rapidly becoming a symbol of status — and oppression.”

The first lady refused to take the bait, telling reporters Saturday that she had no comment on her wardrobe.

“We just completed an amazing trip — we went to Ghana, we went to Malawi, we went to Kenya, here we are in Egypt,” she said as reported by NPR. “I want to talk about my trip and not what I wear. That’s very important.”

It turns out that the First Lady’s hat for the pyramid tour may have been a real message.

@FLOTUS @realDonaldTrump Yesterday, in Egypt, could it be a Cavanagh for Kavanaugh?
And, of course, a White Hat.
Well played Melania, you make us proud. pic.twitter.com/J1U6tcLj6f

Based on the fashion-focus of the reporters, one can safely assume that Mrs. Trump’s tour was a diplomatic success, and that there will be more prosperity for the peoples of Africa and stronger ties to Egypt. Thank you, FLOTUS!

I’ve always wanted to visit the historical marvels of Egypt. I hope that the country’s infrastructure and our relationships with them do improve.

“wonder how much that is costing taxpayers. never heard of agency before now.”

You’ve heard of it. Its acronym is USAID.

yup was gonna pop in say once I heard USAID I recognized it.

Right. Ask someone traveling in Africa about current events in the US.

She did not scratch her crotch in public, she did not trash our country, she’s not a tacky dresser, she’s not butt-ugly, and she’s a self-made women.

No wonder the leftist media hates her.

we have a beautiful selfposessed first lady who repeesents our nation batter than it deserves.

and she has to put u[ with an inane media always looking for flaws to com[lain about.

jealousy of the left is an embarrassment –
a pimple on the butt of lady liberty.

looks like you found the p button just at the right moment!

She’s strong, she’s lovely and does us proud.