“I have found Judge Kavanaugh to be a qualified jurist who will follow the Constitution and determine cases based on the legal findings before him.” 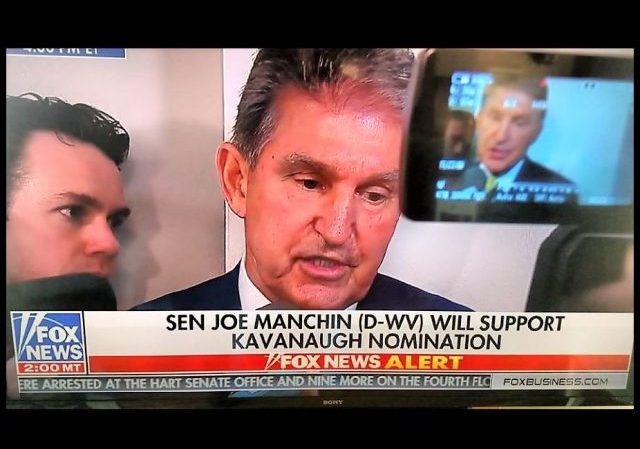 Just after Sen. Collins announced she would vote to support Kavanaugh’s nomination, Sen. Joe Manchin (D-WV) announced he will vote ‘yes’ for Kavanaugh as well.

Speculation that Manchin would support the nomination has been bouncing around the political sphere given that West Virginia voters are strongly in favor of Kavanaugh’s nomination.

Does that mean he’s still floating?

I hope Senator Manchin has a bullet-proof vest. It wouldn’t surprise me if some leftist wacko were to take a shot at him for betraying the Resistance™.

Manchin could not afford to take the risk of voting against Kavanaugh. He may be from a popular family, but Trump and his energy initiatives and rollback of coal regulations have been extraordinarily popular in WV.

Judging from what I have seen, I think Mannchin looks uncomfortable whenever he’s around the rest of the Democrats. May mean that they are not treating him well. As a Democrat, he has to caucus with them, but I don’t think he likes it.

Then you have Heitkamp who seems to have weighed her options, only to vault onto her sword and go down for the cause.

Heitkamp is expecting to lose her reelection bid; she’s down by 10 according to one poll and 12 according to another. Voting for Kavanaugh wouldn’t help her because it would antagonize the base too much (Manchin is different, he’s so much more popular than his party in WV.) So she’s voting nay to appeal to the donor class for a job in January.

Then his response should be, should he win re-election, to change parties (after a suitable period of flagellation by the unwashed leftist mobs).

I suspect that right now Manchin wishes he could change to Republican, but that would open a can of worms.

‘Now that I’ve been assured that my vote will have no actual bearing on the outcome, I’m prepared to vote in the direction that gives me the best chance for re-election’.

I don’t care what his reasons are, as long as he votes the right way.

I do. If he were vote #50 make no mistake – he would be voting against Kavanaugh.

Manchin is even worse than the Democrats. At least they’re honest about not voting for him. Manchin was just waiting to see if he could safely vote ‘yes’ without actually changing the outcome.

Actually, Pence would come in for vote #51. Manchin’s vote was unnecessary. That’s all he wanted. That opens the way for more Dems to vote for confirmation tomorrow. I would not be surprised to see 4-5 more.

Joe only voted the way he did to save his own re-election. After November he will revert to being Schumer’s sock puppet. Unless of course the WVA voters decide they have had enough of him.

What a feckless eunuch Manchin is. He lurches out of the shadows after Collins’ masterful, face-based and courageous speech, and, having been gifted with a fresh set of testicles, courtesy of Collins, proceeds to announce his support for Judge K.

I’m hoping W VA has been watching closely, if they could get the rabbit ears pointed in the right direction.

Hey, you’re talking about my reelations.

Us Virginia folk have to take shots at the West y’know. I didn’t mention anything about incest or furniture burning, so I’m behaving.

Can anyone help with the meaning of this phrase: “With respect to any cases that may come before him impacting the 800,000 West Virginians with pre-existing conditions”.

Is this concerned with healthcare, more specifically medical insurance? Is Manchin concerned about litigation over Obamacare?

I find it hard to believe that at this point in the state’s political history, WVa. doesn’t have enough decent people to replace this doofus with a real conservative.

You’re really saying that about the state that sent Robert Byrd to the Senate for decades?

If his vote was needed, it wouldn’t be there. WVA voters need to wake up.

Time for Trump to have a heart-to-heart with Manchin over what party he belongs in. I think he is available for sale.

Kind of hard for him to do. Given that he’s running for reelection as the Dem candidate.

Its funnier if you say poundmetoo