Trump apologizes to the Kavanaugh family for the way they were treated during the confirmation process.

Also in attendance were the other members of the Supreme Court.

Trump, in his introduction, noted that the Kavanaugh family had been mistreated during the confirmation process, but had been vindicated:

“On behalf of our nation, I want to apologize to Brett and the entire Kavanaugh family for the terrible pain and suffering you have been forced to endure,” Trump began. “Those who step forward to serve our country deserve a fair and dignified evaluation, not a campaign of political and personal destruction based on lies and deception. What happened to the Kavanaugh family violates every notion of fairness, decency, and due process. In our country, a man or a woman must always be presumed innocent unless and until proven guilty.”

Trump added that “under historic scrutiny,” Kavanaugh had been “proven innocent.”

Here are some screenshots of the ceremony. 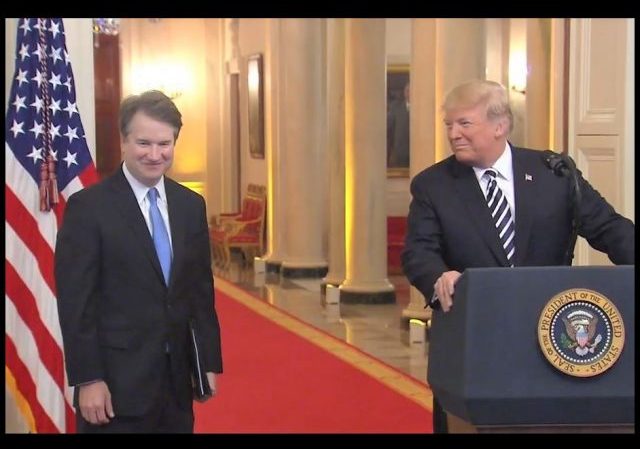 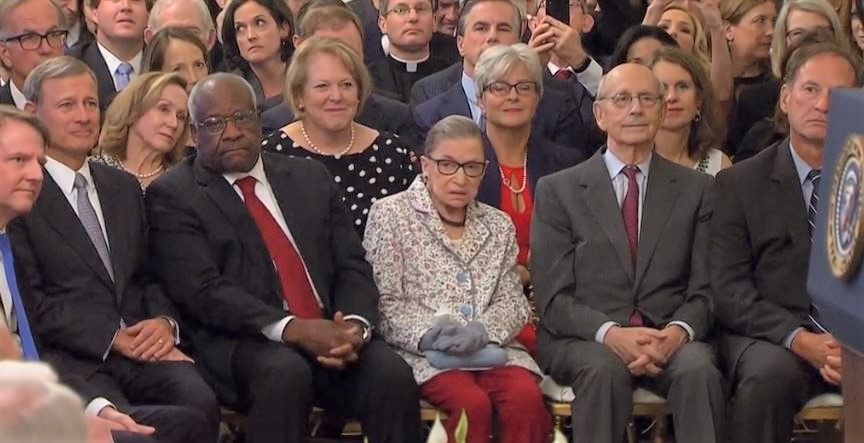 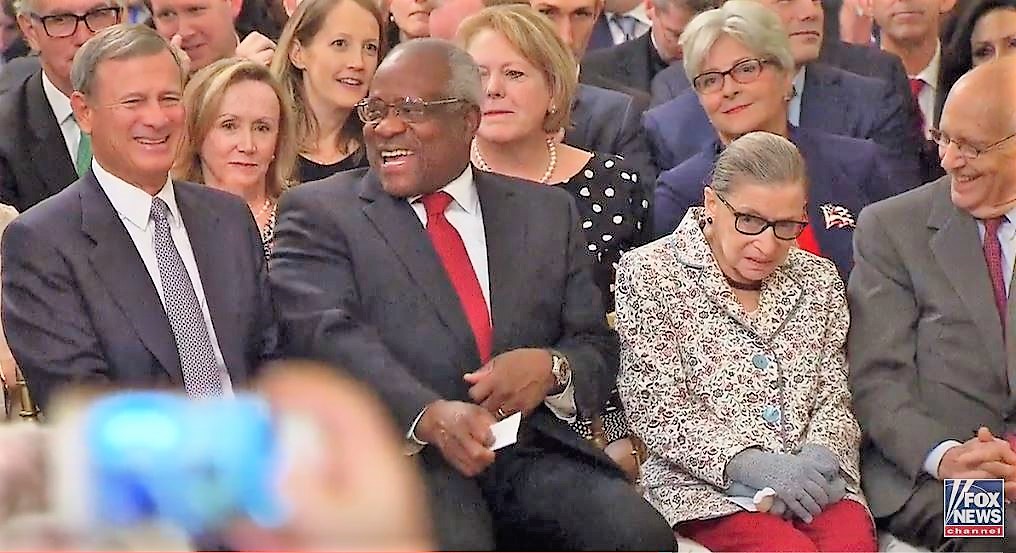 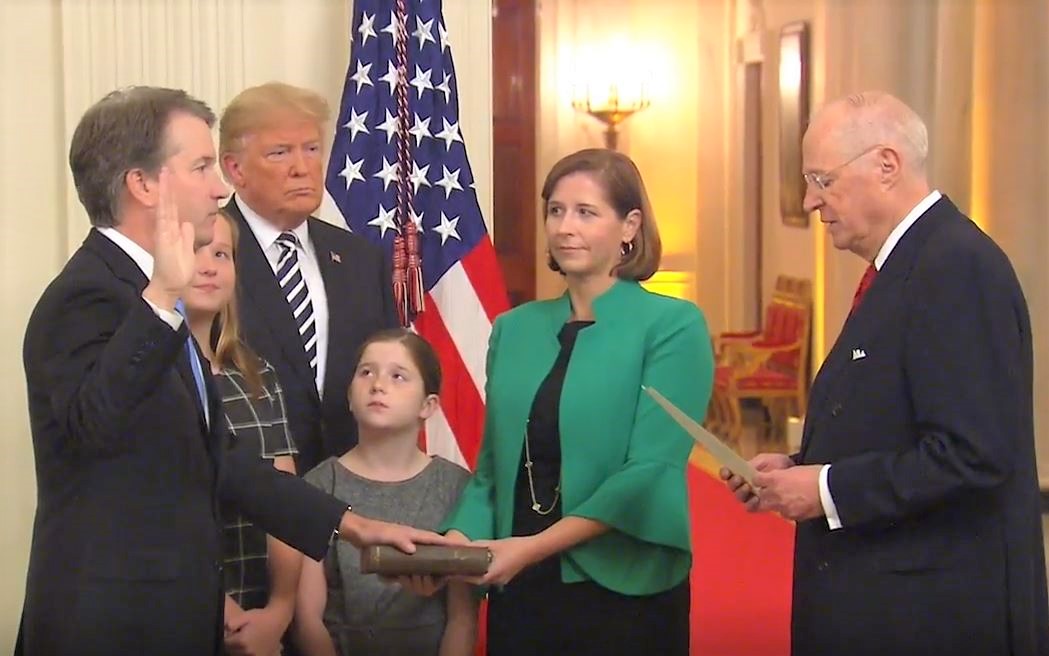 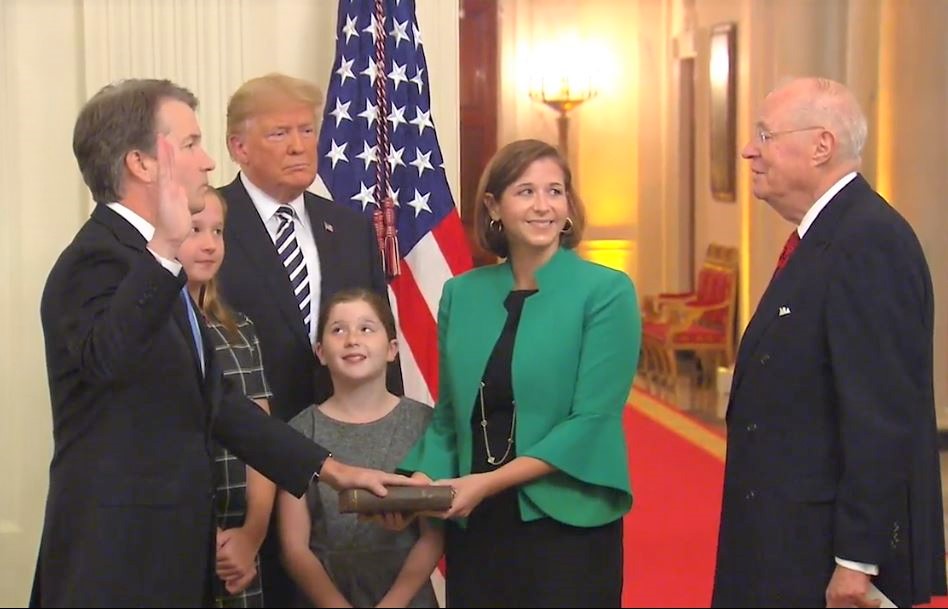 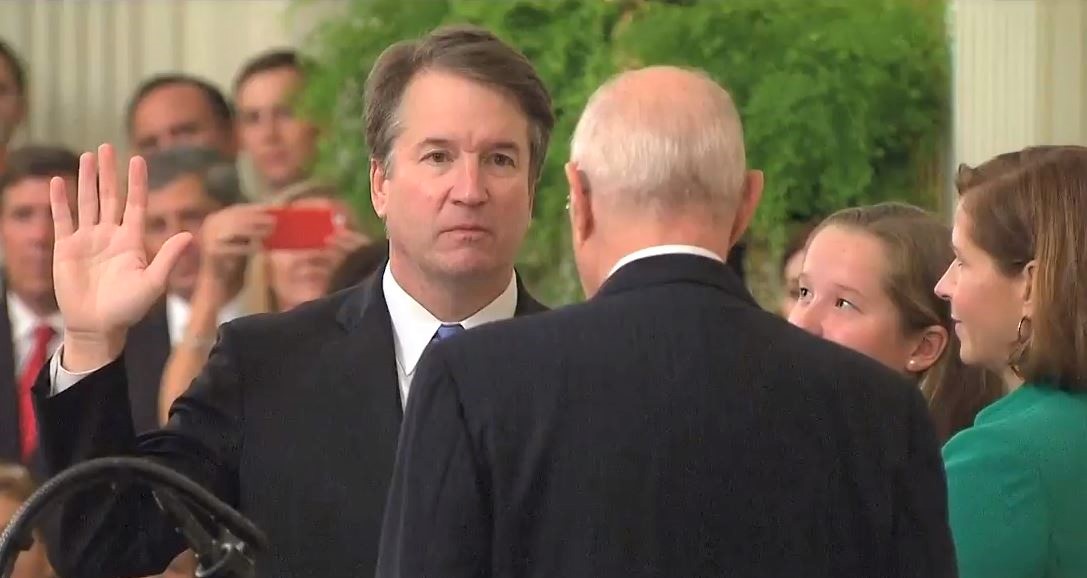 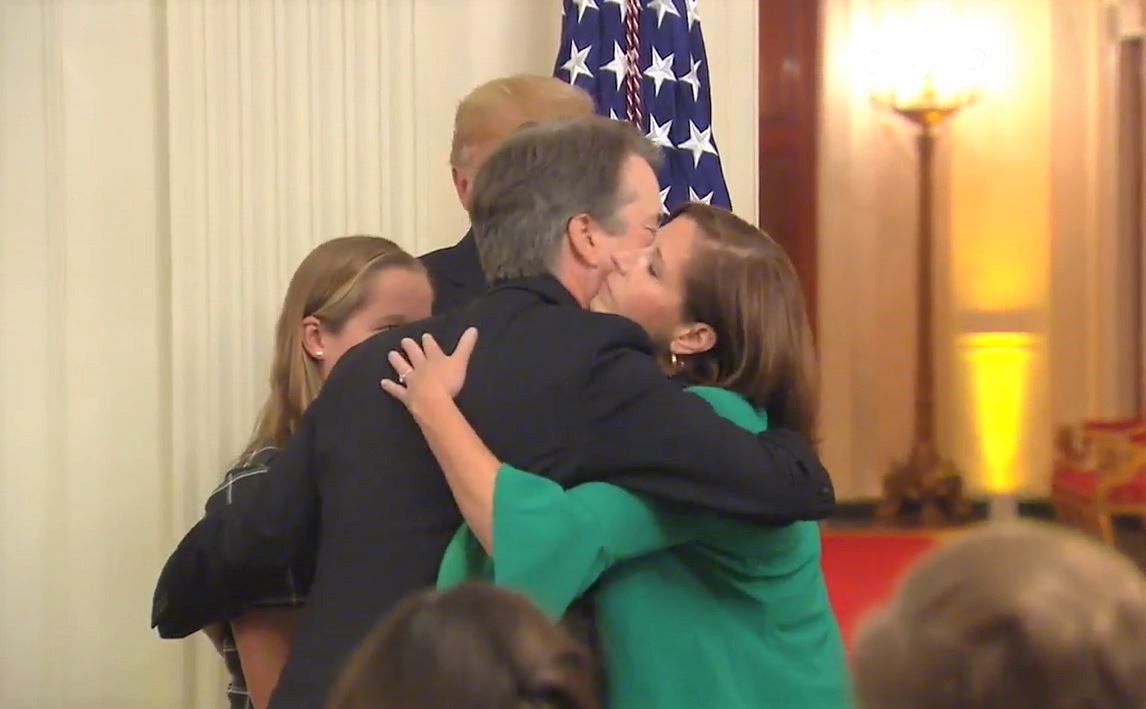 Good thing that’s Trump standing right behind those two girls, and not Biden.

Via SCOTUSblog, the oral arguments that the justices will on Tuesday are:
+ Stokeling v. United States – “Whether a state robbery offense that includes “as an element” the common law requirement of overcoming “victim resistance” is categorically a “violent felony” under the Armed Career Criminal Act, 18 U.S.C. § 924(e)(2)(B)(i), when the offense has been specifically interpreted by state appellate courts to require only slight force to overcome resistance.”

+ United States v. Stitt – “Whether burglary of a nonpermanent or mobile structure that is adapted or used for overnight accommodation can qualify as “burglary” under the Armed Career Criminal Act of 1984, 18 U.S.C. § 924(e)(2)(B)(ii).”

On Wednesday, they will hear two more oral arguments. And, then, on Friday, the justices will meet for their October 12 conference. http://www.scotusblog.com

Some week for the new justice, eh.

Hey just as happy—that’s normal grist for the judicial mill. It’s not all beer and skittles on any bench–even the Supremes. Although I probably shouldn’t mention beer–it will get the libs stirred up.

Hopefully RBG ate the poison mushrooms at the after party. Go Amy.

She’s the only person there who didn’t applaud.

She’s a fake oath-taker. So is Kagan. (And Sotomayer? A bad joke in any event, having been overturned SIXTY PERCENT.)

This is the oath:

“I, _________, do solemnly swear (or affirm) that I will support and defend the Constitution of the United States against all enemies, foreign and domestic; that I will bear true faith and allegiance to the same; that I take this obligation freely, without any mental reservation or purpose of evasion; and that I will well and faithfully discharge the duties of the office on which I am about to enter. So help me God.”
https://www.supremecourt.gov/about/oath/textoftheoathsofoffice2009.aspx

This is Ginsberg, in her own words:

Ginsburg comes out strongly in favor of the Court’s use of foreign and international law materials to interpret U.S. law, including the Constitution. She begins with an historical defense:
http://opiniojuris.org/2010/08/02/justice-ginsburg-on-using-foreign-and-international-law-in-constitutional-adjudication/

Same with Kagan. (See cite, above.)

The Constitutions of the USSR and South Africa read well… as promoted for ZA by RBG, but watch those countries in action… only lip service. Especially the “takings” clauses the Zim has and now debated by ZA…just take and be glad you haven’t been raped, tortured and murdered for being a non-Black African.

She’s the only person there who didn’t applaud.

At risk of misleading anyone into thinking I have anything good to say about RBG . . . it’s a strong possibility that her hands and arms are hurting her.

Sickness and death should not be wished on anyone.

That said, I recommend a dose of Milk Thistle – https://www.foodsafetynews.com/2011/10/milk-thistle-extract-combats-mushroom-poisoning/

Just put her in between moooochelle obama and some food. That’ll do her in.

Even Breyer is smiling, but RGB looks like the Wicked Witch of the West dyed white.

She is not feeling well. She is wearing gloves. I wonder why. From everything I have read about her, she is a genuinely nice person. Clarence Thomas wrote in his book about RBG being the first to greet him when he arrived for his first day and was very warm to him.

The road to hell is paved with good intentions.

She probably borrowed those mittens from romney.

Oh, I’m sure that everything she wants an all-powerful central State to inflict on us is for our own good.

Yup. Such a sweet lady

RBG’s health being what it is, I wonder if she thought in 16 that she could finally retire after Hillary won, but now faces a decision of hanging in and losing any chance of a meaningful retirement or resigning and letting the court go conservative? For her it would be a major decision – especially since she would likely be vilified by the libs for leaving.

The Buzz looked frail, but with good color. The Firm Five should be able to wear her down so much with their superior arguments that she’ll know it’s time to become the Curator at the ACLU’s Hall of Shame which highlights, like Festivus, the way the ACLU has disappointed us over the years.

That apology was a class act. I was actually wondering if Trump would do something like that and I am very pleased that he did it.

And President Trump reminded Justice Kavanaugh’s daughters that their dad is a good man and a patriot. Also a class act gesture, given everything the Democrats and their buddies in the media did to destroy his image and reputation. There’s a special place in hell reserved for those people.

I think it is noteworthy that all of the justices attended. Not all traditions and good manners have been abandoned. There is still hope.

It might be nice to send Associate Justice Kavanaugh a post card (clears security quicker) congratulating him and conveying your wishes to him and his family. His address at the Supreme Court is: