Lindsey Graham to Kavanaugh Protester: “Why don’t we dunk him in water and see if he floats”

Lindsey Graham to Kavanaugh Protester: “Why don’t we dunk him in water and see if he floats” 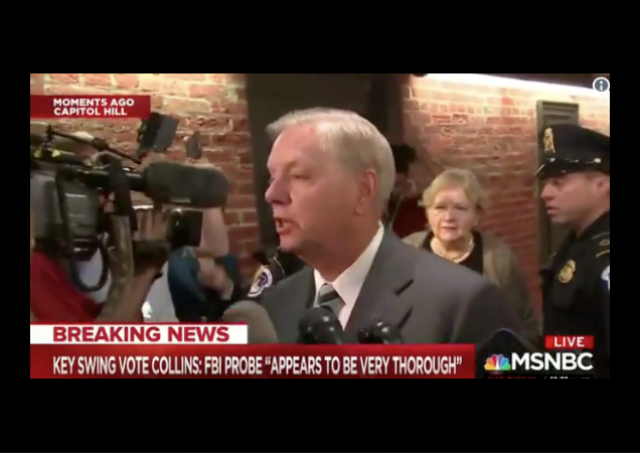 If Lindsey Graham unleashing hellfire and fury on the Senate Judiciary Committee was great, this is amazing.

During a conference, a woman popped in to pester Sen. Graham about Kavanaugh. She was carrying on, calling Kavanaugh a liar, and then suggested that if Kavanaugh took a polygraph test, “it would all be over.”

“If he would take a polygraph, it would all be over, Senator Graham,” she interrupted. To which Sen. Graham responded, “why don’t we dunk him in water and see if he floats.”

Protester yells at him about Kavanaugh taking a polygraph.

Graham: "Why don't we dunk him in the water and see if he floats?"

If you're a Democrat watching Lindsey Graham stop an interview cold, spin around and WREK a liberal protester into silence on national TV with a line about a WITCH — you have to be thinking: 'What in sweet Hell have we unleashed on ourselves? pic.twitter.com/IDWE3ZrAUy

So who kidnapped the real Lindsey Graham and replace him with this space alien impostor?

I want to send them a thank-you card.

Seems this process mugged him into reality that of what the Dems really are.

This is how (R)s win. You don’t win by cowering or caving. You don’t win by saying one thing and doing another. You win with conservative principles. You cannot lose. It’s impossible. This nation isn’t part of the European Union. We left those jerks 400 years ago for a good reason.

You want my vote? Act like you respect the citizens of this great nation, along with the laws and customs that are the reason it is so great. You’ll win landslide after landslide.

The Trumping Point for me was when I finally watched one of his rallies during the Primary season instead of relying on media reports about what was happening at them. (I was still for Cruz at that point)

I knew he “could” win because he constantly refers to “us” and “we” as Americans, can do xyz, instead of referring to “I, me, and my” 147 times in 30 minutes like that skinny effeminate Kenyan with the big ears.

I watched his Minnesota rally this evening. Same thing. Us. We. And it sounded more like a general conversation rather than some grandios speechifying.

McCain is no longer around as a BAD influence.

This was the Lindsey Graham when he was first elected. Now that McCain has taken the eternal celestial dirt nap, I guess he figures he can take the gloves off.

Ii had to watch it twice just because it made me so happy. ????

I tried to insert a smiley face and it turned it into question marks. :-/

Do you find yourself emoticonally challenged or possibly even triggered by the use of emoticons? 🙂 😉 😆

There is a cure for that. Try WP’s latest product. Please follow this link to an emoticonally safe space the next time you need to express your true feelings on LI without the fear of insensitive bloggers not letting you feel safe because they tease you for making the same mistake they have made themselves so many times before! 😳

Hope that helps … it did me after I had an embarrassing emoticon incident … and in the meantime, be happy! Because of the lack of being able to edit our posts, our mistakes never go away. 😀

notamemberofanyorganizedpolicital in reply to RNJD. | October 4, 2018 at 4:35 pm

She weighs the same as a duck? Perhaps a baby and a duck, but a woman and a duck? Drop them both from a tall tower and observe who hits the ground first.

Clint Eastwood should be all smiles..It had to have “made his Day” !

I hope that left the protester with a flesh wound or three.

Super! He has really been on fire thalassemia week or so. I hope he stays that way,

It’s the antonym of covfefe

Autocorrect is not your friend. I’ve seen some hilarious examples, such as a texting conversation between a son and his mom and he asked if his mom would like to eat out that week. Autocorrect turned that question into an extremely indecent proposition.

Seems the scales fell off his eyes and he finally has woke to the truth of what the Democratic party truly represents.

McCain never learned that. Too many other Republicans will never learn that.

This is how you do it. Punch back. Stand up for something, especially when you know it is right instead of backing down because the media – the propaganda wing of the Democrats might say mean childish things.

notamemberofanyorganizedpolicital in reply to oldgoat36. | October 4, 2018 at 4:38 pm

Woke up to the truth that is now
“We the People’s Republican Party!”

I live in Dallas and I was listening to a couple of talk radio hosts, Marc Davis and Mike Gallagher, discussing Graham. Apparently Gallagher has known Graham personally for years. Davis has covered Graham but doesn’t have any personal relationship. Gallagher says the Graham we’re seeing now is the Graham he’s always known. Before he was under the spell of McCain. If he had scales on his eyes McCain put them there.

They were discussing Graham’s recent TV appearance, on Hannity I believe (I cancelled my cable), and Graham said that if you think he’s angry his friend McCain would be even angrier. Both Davis and Gallagher agreed; not in a million years. Maverick would be sucking up the bandwith running to every TV camera in sight lecturing Trump to withdraw this nominee.

I’ve got an open mind. We’ll see if this is the real Lindsey Graham.

Yet another silver lining in mccain assuming room temperature.

Who are you and what have you done with Lindsey Graham?

More importantly, how long can you stay?

notamemberofanyorganizedpolicital in reply to RedEchos. | October 4, 2018 at 4:39 pm

I’m so gonna steal that! LOL

As long as his supply of ‘Red Pills’ lasts.

As a side note can everybody remember going forward that this “woman” is saying that you have to prove your innocence with a polygraph if accused and you know that when it came back clean it would be insufficient.

The Progressives have established that they will make accusations and Republicans and Conservatives will prove them wrong.

In the humor of this don’t forget that Senate Republicans have themselves to blame for completely eroding our standards of what an accused has to do by placating these EVIL people who ARE NOT Americans but Totalitarians.

Kidding aside, we should have just sent Judge Kavanaugh to The Bridge of Truth.

notamemberofanyorganizedpolicital in reply to DDsModernLife. | October 4, 2018 at 4:47 pm

Ah but the Forevah Lyin’ Media omitted how Hillary licked her….

I can only remind people to remember Arlen Specter, if you’re old enough or look him up if you’re not. This particular leopard may have misplaced one spot, but it’ll take a few more before I think he’s changed.

Dunking witches is not Monty Python, it’s history. Python’s brilliant twist was to substitute a test for whether the alleged witch would float were she to be dunked; one that is both completely safe for the accused, and which is guaranteed to clear all non-witches (and most witches).

Cf the Bible’s test for adulterous women. Make her drink a bitter but completely harmless potion, and if she’s guilty she’ll miraculously die a horrible death from it. If you believe in the Bible then you believe that God will punish only the guilty; if you don’t then this is a brilliant way to convince every jealous husband that his suspicions are wrong and his wife is faithful, whether she really is or not.

Where is this? I am not familiar with that and I recently finished the OT

Please do not converge New Testament thinking with old. The Bible serves several faiths, but not all books are treated equally. Jesus never preached such nonsense, nor did many Jewish writers. In a family with multiple faiths, we even acknowledge the time in history such laws were applied and the moderation over time by members.
Often the severest punishments called for in the Old Testaments were more threats than actual . That is why the new world was shocked by the insanity of Salem pogroms..which appeared to adopt the conveniently harsh and idiotic trials of the barons of the 15th century Germanies.

The Bible is very clear on this, so how dare you call it nonsense? For those interested in what Jesus had to say, he said he neither could nor would change a single letter of God’s word.

This is what God Himself said should be done when a wife gives her husband reason to suspect her of adultery. She is to be made to drink a bitter but harmless potion, and if she’s guilty it will miraculously turn to poison inside her and she will die a horrible death. If you believe in it then of course it will always work; if you don’t, then like Monty Python’s witch test it will always find the subject innocent. Either way how can anybody object, let alone claim it either needed to be or was “moderated”?

Graham’s comment has nothing to do with witches. I think all us country folks know how to test eggs for freshness; You place them in a bowl of water and if the egg floats, they’re rotten. See, when you have free range chickens you need to do that because when you find a nest out in the woods, you don’t know how long the eggs have been sitting out there. You’re welcome…

Graham was talking about witches.

“I see you are wise to the ways of science sir!”

The scurrilous accusations against Kavanaugh were the “witch’s nose”, “They made me wear this!”

Any chance her true story comes out shortly? It would be interesting if she recanted just before the vote. Na, not with 700 K in her GoFund.

Interesting, yes. Fiscally prudent, no. She’s got many years of paid speaking engagements, at least one book deal with a large advance (so it doesn’t matter how many copies it sells), and a month worth of paid interviews for her to cash in on yet. Expect her memory to get remarkably better as she works on the book, yet still vague enough not to be nailed down with any of the points as an outright lie.

Remember Anita Hill swore she had no intention of writing a book or making money on the lecture circuit off her testimony. Which fools believed her?

who knew it was possible for invertebrates to spontaneously grow a spine?

KEEPER
Stop! Who approaches the Bridge of Death must answer me these questions three, ere the other side he see.

FORD
Ask me the questions, bridge-keeper. I’m not afraid.

KEEPER
Where did this incident occur?

FORD
I don’t know that! Auuuuuuuugh

I can’t upvote that enough.

I need to point out that Carol Cleveland was very yummy.