Democrats in full freak out mode 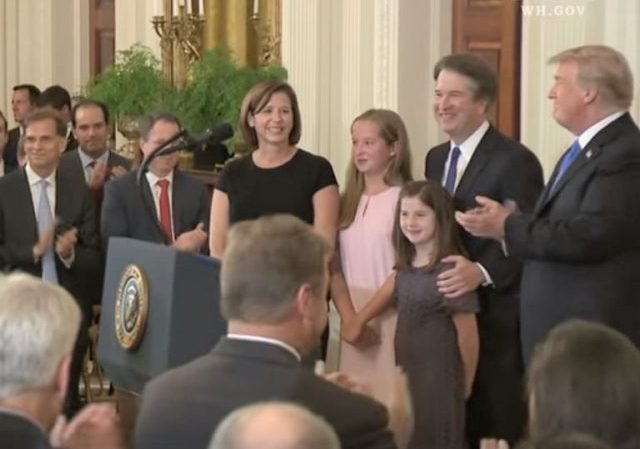 I fervently hope the reports of increased GOP enthusiasm for the midterms are accurate because there will be a lot on the line as we head to the polls next month.

Not only is their entire agenda an unworkable hodge-podge of prohibitively expensive “freebies,” but Democrats have made it abundantly clear that they will launch numerous investigations into President Trump with the hope of removing him from office.  Should he be confirmed to the United States Supreme Court later today, we can add Brett Kavanaugh to the list of promised investigations, as well.

House Democrats will open an investigation into accusations of sexual misconduct and perjury against Judge Brett M. Kavanaugh if they win control of the House in November, Representative Jerrold Nadler, the New York Democrat in line to be the chairman of the Judiciary Committee, said on Friday.

Speaking on the eve of Judge Kavanaugh’s confirmation vote this weekend, Mr. Nadler said that there was evidence that Senate Republicans and the F.B.I. had overseen a “whitewash” investigation of the allegations and that the legitimacy of the Supreme Court was at stake. He sidestepped the issue of impeachment.

“It is not something we are eager to do,” Mr. Nadler said in an interview. “But the Senate having failed to do its proper constitutionally mandated job of advise and consent, we are going to have to do something to provide a check and balance, to protect the rule of law and to protect the legitimacy of one of our most important institutions.”

Mr. Nadler’s comments resembled those of Senate Democrats who pushed aggressively for an F.B.I. investigation into allegations by three women — Christine Blasey Ford, Deborah Ramirez and Julie Swetnick — that Judge Kavanaugh had engaged in sexual assault or misconduct. Democrats said the resulting investigation fell far short of legitimacy. And they have questioned whether Judge Kavanaugh was truthful in his testimony about a number of issues, including his drinking habits, before the Judiciary Committee.

But unlike Democrats in the upper chamber, who are likely to remain in the minority after November’s elections, Mr. Nadler could soon have subpoena power and a chairman’s gavel, backed by a Democratic majority in the House.

He said that if Democrats took power, he would expect the committee to immediately subpoena records from the White House and the F.B.I. . . . .

In response to this, I can only echo (the new-and-vastly-improved) Senator Lindsey Graham (R-SC): “Boy, ya’ll want power. I hope to God you never get it.”

Meanwhile, the unhinged left is fuming.

Hey, I'm 62. I never thought I would be in this situation, wondering if American democracy can make it through. But here we are. The day after the 2016 election was bad. This in a way is worse. Dark times.

And he can take Pelosi with him.

Which means they’re planning to make up more fantasy charges. There’s no limit to the number of imaginary crimes they can insist need urgent investigation. This is not a formula for a workable government or society.

Possible is politically congruent to probable, but possible is not equal to probable. With a dearth of evidence, fantasy is a logical conclusion. Democrats jump the Ass when they conflate logical domains for political progress.

Let me state two points on this

1) It assumes we don’t keep learning more and more that this was a Democrat Slime operation and the witness tampering and lying to the Senate about fear of flying can be avoided while making the story that the FBI has vetted as uncorroborated is somehow made to stick. As we speak Grassley is calling on the Ford lawyers for the polygraphs and he holds FBI texts and testimony that Ford’s friend was in contact with Leland and encouraging her to change her story.

2) It assumes that there is not a public backlash that the Democrats somehow survive to win the House but decide to resurrect this for 2020. Even their political calculation might not be that continuing to pursue Kavanaugh will continue to gain them public support through 2020. That is an odd situation that doesn’t even seem realistic to me. They actually need to abandon this horrible scam as soon as they can because it is political death to keep this in the headlines. The only thing worse than this confirmation debacle in the public eye would be a repeat impeachment hearing.

The problem is much more fundamental than this. In a Democrat-run world, facts don’t matter, testimony is irrelevant, evidence is “too patriarchal” and invalidated by its “linear male thinking.” Mere accusations establish guilt—an Orwellian nightmare world, a cultural revolution brought to us by—as always—the Left.

Force is the only way to put a stop to it. Let them fantasize all they want, but when they resort to perjury, people have to start going to jail. Otherwise, there are no penalties for Democratic and liberal lies and fabrications. So they will continue. And why not? The costs are negligible, and the potential payoffs are huge.

It is hard to imagine that Mrs. Russell Ford will want to drag this out much longer, much less for the next couple of years.

An investigation run by these Lefties would be a parade of witnesses making unsubstantiated charges and without witnesses to refute them. The logo for their “investigations” should be a kangaroo.

1. Vote in November to ensure that the Rs keep & hopefully increase their edge in both houses.

3. Help the candidates in swing states by donating to their campaigns. I’ve made about 10 small donations. But, I do check their websites to make sure that what positions they hold and that they fit with mine.

4. When I start getting the follow-up emails, I’ll write back stating my views that I hope they support.

5. Continue calling your Senator & Rep to tell them your opinions. Be polite and to the point and the call-taker will be nice to you.

Just exactly what in the fucks sake are these dim witted dumb fucks going to investigate?

Seems to me the only ones who need investigating here are the Democrats themselves!!

And, by the way, how are the Dems figuring they can discredit the FBI’s work on Kavanaugh when the FBI was part and parcel to their efforts to disrupt the Trump campaign. I was concerned that since the FBI has shown to be less than non-partisan in recent times, that they would continue down this path and find or create something to call corroborating information.

Won’t work. The facts don’t matter. Even citing a fact in your defense will be a count against you, as facts are “toxic masculinity” and the resort to such devious machinations just demonstrates your “privilege.” Defense is an admission of guilt—as we saw in the attacks on Kavanaugh’s “un-judicial temperament”.

That’s what “believe the woman” means. Facts, evidence, logic—even pure, unadulterated innocence—don’t have anything to do with it.

We’re being driven into an age of anti-intellectual barbarism.

The good news is that the feminized post-intelligent “world of feelz” will fall easy victim to the Caliphate, which will end all that feminist foolishness, and replace it with its own traditional home-grown barbarism. I suppose every Dar al-Islam has a silver lining.

“IF”
All of a sudden it seems to be such a big word.

Nadler says “It is not something we are eager to do.” Hogwash. They are chomping at the bit. Do not give them the opportunity because they will definitely do it.

Is it wrong of me to keep desiring to hear the lamentations of their women and their girly men? This election could produce that result big time. Make it happen.

Nadler, Schumer, Pelosi, Schiff and Da Nang Dick Blumenthal can kiss my pet buffalo’s butt–if you know what I mean and I think you do.

I count a few politicians/partisans/elitists among the Democrats. They should be selected for Planned Politician – a kind and common civil right, exercised by the People to retire nonviable representatives from public service.

It should be standard procedure that anyone who seeks an investigation of someone else be subject to a similar investigation with the same standards of his or her self.
Its time that the Republicans hire private detectives to look at the lives of all Democrats who seek public office. What do we know about Schumer’s high school behavior? Why is it of less interest than Kavanaugh’s?

Maybe Mueller will be fired and back on the market by then.