“This is all personal now.” 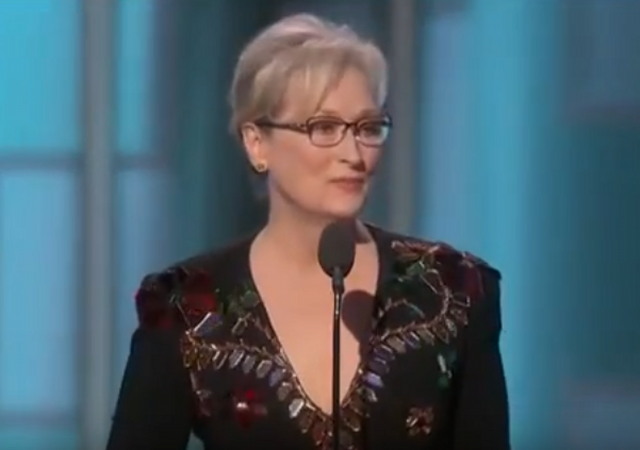 Not everyone in the entertainment industry is a progressive, but anyone who is even slightly conservative must remain silent for employment purposes. As a result, we only hear from the loudest leftists and they are convinced they’re saving the country.

Katherine Schaffstall of the Hollywood Reporter frames this story in a way that makes it sound like these celebrities are performing a public service.

How Hollywood Is Helping People Vote in the Midterm Elections

With the 2018 midterm elections just around the corner, a number of Hollywood stars are using their platforms to encourage people to vote.

Taylor Swift broke her long political silence in early October, endorsing two Democratic candidates in Tennessee, in an Instagram post that encouraged fans to register and vote, which subsequently sparked a surge in sign-ups.

Beyond simply taking to social media, a number of politically engaged stars like Julia Louis-Dreyfus, Billy Eichner, Yara Shahidi, Tom Hanks and Lin-Manuel Miranda have participated in various initiatives designed to increase turnout at the polls, sharing resources and information — and urging people to register and vote — so that people can make their voices heard on Nov. 6.

Many of these folks have lots of expendable income and they’re funneling tons of it to Democrats. Judy Kurtz reports at The Hill:

Hollywood Democrats are pouring money into the midterm elections, infusing races with cash in a last-ditch push to flip control of Congress.

Some of the country’s most famous faces — including Meryl Streep, Steven Spielberg, Alec Baldwin and Paul Rudd — have been splashing their signatures on big-money checks for House and Senate candidates in recent months.

Streep and actor Jack Black each donated $10,000 in September to a joint fundraising committee that benefits Sen. Claire McCaskill’s reelection bid, according to Federal Election Commission (FEC) data collected and analyzed by ITK. The Missouri Democrat is locked in a nail-biter with the state’s attorney general, Josh Hawley (R).

Like the media, political activist celebrities have never gotten over the 2016 election. Not being able to influence the public drives them absolutely crazy. This report at Variety by Ted Johnson is very telling:

Hollywood Democrats Double Down Ahead of Midterms: ‘This Is Personal Now’

With just three weeks to go until the mid-term elections, Hollywood Democrats claim they are not taking anything for granted — a different outlook than they had in 2016.

Complacency and confidence are being replaced by energy, enthusiasm and anger, as industry heavyweights forge get-out-the-vote videos, knock on doors and in some cases perform at candidate fundraisers. They’re also shelling out what looks to be record amounts of money to ensure a Democratic victory.

Moreover, activists believe the recent confirmation of Brett Kavanaugh to the Supreme Court creates an even greater sense of urgency on the left, particularly among younger voters, even if the polarizing battle also has united the right.

“This is all a perfect storm,” says actress and activist Alyssa Milano. “Everything from electing Trump to #MeToo to this Kavanaugh hearing and Dr. [Christine Blasey] Ford coming forward. This is all personal now. And when we are seeing our rights stripped away, we’re scared.

What are these people going to do if they lose again?

notamemberofanyorganizedpolicital in reply to Whitewall. | October 25, 2018 at 4:41 pm

Force them to move to Iran – where they’d be political fits.

“This is all personal now. And when we are seeing our rights stripped away, we’re scared.” – Alyssa Milano

Now? More like ‘still & again.’ You loon bag Leftists long ago made government your god, perverse public policy your doctrine, and abortion your gruesome sacrament – all funded with other peoples $$$.

‘Rights stripped away,’ loon bag Leftist?? No, you see your greedy power slipping away. Choke on it.

Personal? Maybe a little… See you at the ballot box.

Hollywood, for all intent and purposes, seems to be a ‘Union Shop’. If a person doesn’t support and ‘speak out’ in favor of Democrats, then they’ll be ostracized at the very least. If a person has as their only skill acting in pretend fantasy’s or flashing their body around…which will gain wrinkles and sag after a few years, then they’ll support Democrats.

The life of a prostitute is NEVER easy – morals and ethics take a back seat for most. People wonder how Weinstien (or whatever the fat turds name is} managed to sexually harass so many women?

What are these people going to do if they lose again?

If there’s such a thing as being 110% crazy, I’m sure they’ll blow past that into never before seen levels of crazy.

re: What are these people going to do if they lose again?

Wash, rinse, repeat… Hide in their basement and do drugs, then start to whine loudly. Why? Because it makes them feel good and important.

Don’t know what they’ll do. But I’m sure hoping to find out two weeks from now.

Never seen before? Did you miss the 60’s?

Nope. Lived thru’em. That was drug-induced crazy; this is just normal crazy, on steroids.

“And when we are seeing our rights stripped away..”
What the heck is she talking about? What rights have been stripped away? You still have all your rights. Last I looked martial law had not been declared. This is all just a temper tantrum from people with too much time on their hands and money in their hands and very little gray matter. I wonder how many of them will invite the people from the “migrant” caravan to live with them? Crickets. But you and I who work for a living instead of emoting for a living will be the ones footing the bill.

Beware, there are voters who believe this nonsense. Remember all the outright lies about what DJT said in the runup to the 2016 election? None of that has even slowed down.

And I am sure there are people willing to say that they believe we have confirmed a US Supreme Court justice who is a serial drug dealer and rapist. Why is this even remotely plausible to them? Because they tolerate serial drug dealers and rapists in their midst and protect them. They need to see that the other side is no better.

Valerie: “Why is this even remotely plausible to them?”

I know plenty of women and a few men who display their “Believe Survivors” virtue signalling badge. Trust me, it is completely unrelated to “believing” and everything to do with belonging.

It’s okay. Relax. There is nothing to worry about.

After all, these are the same people who brought us “The Last Jedi.”

I know who Hanks is, never heard of the rest.

Once again, we are seeing a sudden surge of Dem fundraising going on as candidates fade in the polls. Despite being outspent (and ads being banned), GOP candidates are riding the Trump campaign magic. That’s the problem when you are selling cancer.

The communists are again falling back on the same excuse for their failing campaigns that they use when their government programs fail; “NOT ENOUGH MONEY! WE NEED MORE MONEY!”

More dirty money to toss onto those bonfires. If you think Dem PTSD was off the charts in 2016, wait until they are again “robbed” of a “sure victory” in two weeks. Winning!

You know they’re desperate when they resort to very publicly “finding” pipe bombs in their mailboxes. FBN has been tut-tutting this all morning.

Yup. It’s all so convenient how these anonymous mailbox bombs against the top dog DNC crowd just happened to cluster up when the polls aren’t looking as rosey for Dems as they once did.

I can see the victim card being played very soon to highlight the dangerous Trumpian white nationalists and their threat to democracy, blah, blah. To be repeated endlessly by CNN & MSNBC until election day, then magically disappear.

Hollywood is a massive money laundering operation for leftist causes. I suspect that Meryl Streep, Steven Spielberg, Alec Baldwin and Paul Rudd received a contract or payment equal to or greater than whatever sums of money they contributed.

Yup. This is similar to the book publishing scam of political contributions disguised as mega-million dollar book advances for DNC politicos.

Of course! I hadn’t realized that before.

“Show biz kids making movies of themselves you know they don’t give an F about anyone else.” Nothing new here. To hear them talk, you’d think that they were either important or relevent.

Perhaps we should start a campaign to label Weinstein as a pimp and then let them make the connection as to who they really are in the grand scheme.

Streep, Hanks, Dreyfus, Messing, Milano, Silverman, and many more provoke a trigger-finger response on my remote-control …

More and more I’m turning to programs originating out of Canada, the UK, Australia and NZ – getting more than my fare share of streaming from Acorn and PBS. We can pick up Canadian channels OTA here and have really enjoyed the absence of politics and politically correct BS rampant in Hollywood originated programs.

One recent discovery on Netflix was “Kim’s Convenience” out of Canada. They had me with the first episode when Mr. Kim to defuse a situation with a militant gay customer, came up with the “gay discount” on the fly … what followed had me laughing out loud.

There’s lots of reasons I prefer BBC and Canadian programs to US ones – I hate laugh tracks – ever increasing political messages and correctness – music tracks – gay quotas … any more it just seems like US programming is just that – programming on a juvenile level – while Canadian and UK TV is more mature.

This being the first time we’ve lived where we could get Canadian TV, I was also delighted to find “Corner Gas” reruns. What a delightful and funny show that is!

Q: What’s the difference between Hollywood Democrats and lemmings?
A: Some lemmings are smart enough to not jump off the cliff.

Is that a picture of Harvey’s pimp?

Why yes, I believe it is.