Hillary Smiles, Nods When Introduced as “The Real President”

Hillary Smiles, Nods When Introduced as “The Real President” 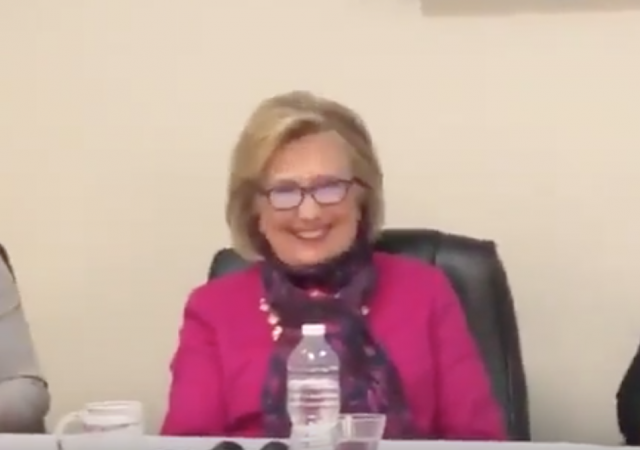 Were almost a solid two years into Trumps presidency and a good chunk of the population is still in denial. And so is Hillary Clinton, apparently.

After Eric Garner’s mom was introduced to a very small gathering, Hillary was introduced. Someone shouted, “The Real President!” Hillary didn’t correct or dispute the claim. Instead, she grinned widely and nodded in agreement. The small crowd laughed and cheered and Hillary nodded and smiled all the while.

To the chagrin of the entire Democrat party, Hillary has floated running for President (again) in 2020.

Creepiest smile of the year.

I am a broken record….

Hillary will go down in history as the worst sorehead loser who lost an election because she was not smart enough to campaign based on electoral votes. Think of someone like her as president, that would have been an unmitigated disaster.

Burr did get the electoral votes. The exact same number as Jefferson. That was the problem.

It would have been Bills Third Term in Office!

Praise and thanks to God that the mental defective has never held any position wherein she may have inflicted herself against America.

IDK: as F”L”OTUS, she did a pretty good j*b of screwing things up… 😉

As Secretary of State she let loose all of the confidential information she touched, which may well have had something to do with the loss of all of our Chinese intelligence assets.

She was asleep at the wheel when the security situation deteriorated in Benghazi, and failed to influence the budget to get help. When everything dropped in the pot, she stood back and waited on Barack Obama, letting her “friend” die to show that Obama didn’t like to take action.

She used the State Department as her own personal piggy bank.

There is a pattern of decision-making by the State Department that suggests that she sold her influence for donations to the Clinton Foundation.

She publicly took credit for the killing of a foreign Head of State.

So yes, she was in a position to do harm to the United States, and she did.

Dodging bullets and running for cover on the tarmac in Beirut. Priceless.

Hillary is a floater all right. She may need to be flushed yet again.

Yes of course Hillary dear you are President. Now come along and get measured fort you’re new President suit. You’ll like it, it’s a nice orange.

Let’s not forget the 40 (or more) people who were alive before they crossed her path. The deadliest thing a person can do is to in some way become a threat, real or imagined, to Killary’s plans. The most well known is Vince Foster but he was not the first, nor the last. She hired all these deaths out of course, but still may be the most prolific female serial killer of all time!

notamemberofanyorganizedpolicital in reply to Walker Evans. | October 23, 2018 at 1:55 pm

Hillary as a political Whack A Mole. Who woulda thunk?!

Hey, Dementia is no laughing matter!

Next, Hillary will be having a summit meeting with Michael Brown’s mother, and finally a a high level meeting with Freddie Gray’s Mother to discuss BLM affairs.

Most Leftists have problems with reality. I keep going back to the idea that the Dems/Progs cannot believe the smartest woman in the world lost a rigged election to someone who had never held elected office. Too bad.

WHEN dreams, reality and anti-psychotic drugs all arrive together on the same neuron network….things can get weird. Just throw her back in the bus! ROFL

Well, really, she IS president: president of her own fan club.

She wasn’t introduced as “POTUS,” just as “the real president.”

Her presidency is as real as a Barbie doll (i.e., the doll is not a real woman, but it surely is a real Barbie doll).

You just gotta use those special Clinton parsing rules.

In her twisted, phucking mind, maybe!

She’s like a bad penny. Just won’t go away. The Democratic Party would go up in flames if she ran again )X3) and lost in 2020 against Trump. Sweet thought!

notamemberofanyorganizedpolicital in reply to iknowthetruth. | October 23, 2018 at 2:01 pm

Maybe we should start an email campaign to encourage the Thang to run in 2020?

“…Hillary nodded and smiled all the while.”

That’s what my elderly uncle does who suffers from severe dementia that will, sadly, likely lead to his death soon.

I detect similarities between the two people.

This low life sociopath only got recognition by riding the coattails of her sick pervert husband.

I will ALWAYS believe that if President Trump did not accomplish one other thing as President, keeping this poisonous self delusional azzwipe out of the White House to cause Americans to suffer another 4 years of an Obama Style Banana Republic Governance rife with corruption, scandals, cronyism, violation of laws, and tyranny was more than enough to earn our thanks.

This woman is mentally ill and should have been institutionalized decades ago. In fact, she has the same aberrant personality and set of behaviors as criminals seen in various “Investigation ID” Stories. And based on the circumstancial evidence already in the Public Domain, she should be in prison with a cell that has walls covered with mirrors to feed the love that she has for herself. SHE IS DISGUSTING !!!

notamemberofanyorganizedpolicital in reply to PersonofInterests. | October 23, 2018 at 3:01 pm

Do take into consideration that this is a virtual
PBS “love” Job done on Hillary, and that the Hillary speech is a reconstruction. That is not Hillary speaking the speech and we therefore can have NO TRUST that it is actually what she said. (PBS is just one MOB MEDIA MSM arm of the Democrat Party after all.)

It does reveal a very “racist” act – by the Democrats own standards.

If this is actually what the Thang called Hillary spoke that day, then note how she said absolutely nothing – or nothing of any substance. Just Wynmyn fairly tales of know-nothing nothingness.

Same comment that can be made on 75 % of articles in LI. Libs know there is rapidly changing demographic in US. Get used to it.

“The time for the clowns and the acrobats and the dancing bears has passed.” No wait that was someone else.

Is that really her or is it her body double?