Feinstein on FBI Report: ‘It looks to be a product of an incomplete investigation that was limited, perhaps by the White House’

Feinstein on FBI Report: ‘It looks to be a product of an incomplete investigation that was limited, perhaps by the White House’

Schumer wants the FBI to make the report public. 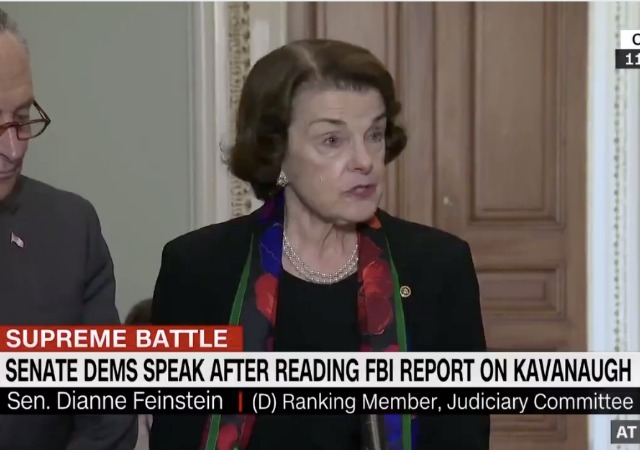 Of course the Democrats have slammed the FBI report on Kavanaugh and have even placed the blame on the White House.

Dianne Feinstein, the top Democrat on the Senate Judiciary Committee, after reviewing the FBI report on Brett Kavanaugh: “It looks to be a product of an incomplete investigation that was limited, perhaps by the White House” pic.twitter.com/R4oMGwgyAq

“The most notable part of this report is what’s not in it.” Senate Democrats are detailing the latest FBI report on Kavanaugh ahead of a vote on his nomination. https://t.co/b5KGSw98k7 pic.twitter.com/SI5n7YsPas

“Dr. Ford came forward and won America’s hearts. Our Republican colleagues were upset because that might derail their headlong rush to put Judge Kavanaugh on the Supreme Court,” @SenSchumer says https://t.co/vcWk76OlN4 pic.twitter.com/UWwueCiFrD

Senate Democrats are criticizing the White House for what they say is a limited FBI investigation of Supreme Court nominee Brett Kavanaugh.

Sen. Dianne Feinstein (FYN’-styn), the top Democrat on the Senate Judiciary Committee, says the most notable part of report into sexual misconduct allegations against Kavanaugh “is what’s not in it.”

The California Democrat says the report made available to senators on Thursday is “very limited” and she says “it looks to be a product of an incomplete investigation.”

Feinstein She says the White House may have limited the probe.

Senate Democratic leader Chuck Schumer says he disagrees with a statement by the committee’s GOP chairman that the report found “no hint of misconduct” by Kavanaugh.

Schumer is calling for the report to be made public as well the directive the White House gave the FBI ordering the investigation.

“whine, whine” the dems didn’t get their delay till after the mid-terms “whine whine”

if trump were to “hint” that he would be willing to postpone the vote till after a full investigation of Blasey-ford et. al…..and Feinstein’s obstruction tactics, the dems would be screaming for a vote A.S.A.P.

SURPRISE! The Dems aren’t happy with the FBI investigation. The Republicans have bent over backwards, delaying the testimony because flaky Ford “can’t fly,” and waiting until the FBI could investigate. There’s nothing they can do to make the Dems happy, so stop trying.

The Republicans need to stand up for the truth and have a vote to confirm Kavanaugh. They have catered to the childish demands of the Dems too much. It’s time to reaffirm a good man’s reputation.

The left was always gonna find a reason to say the report was flawed … it’s a given.