Do Democrats Have a Latino Voter Problem for the 2018 Midterms?

Do Democrats Have a Latino Voter Problem for the 2018 Midterms? 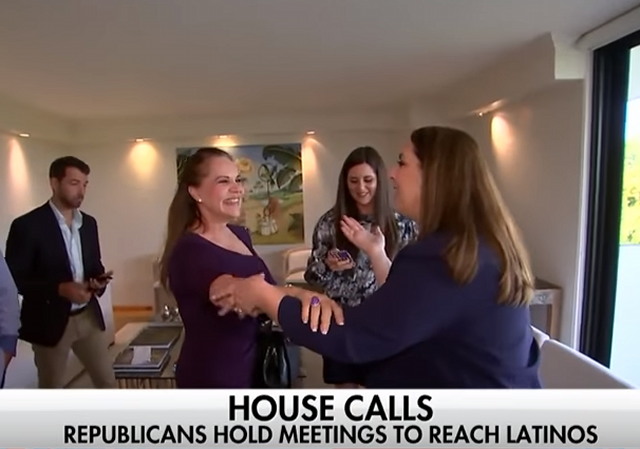 Democrats are counting on their identity-based coalition to carry them over the finish line this fall but they could be facing a shortfall. According to more than one recent report, Latino voters are not as fired up to vote for them as the left needs them to be.

Melanie Zanona of The Hill raised this issue a few days ago:

Democrats have a major edge when it comes to support among female voters, but they have struggled to lock down another key voting bloc: Latinos.

While midterm voter turnout among Hispanics has historically been lower than other demographic groups, many on the left have been hoping that President Trump’s hard-line immigration policies and heated rhetoric will lead to a surge of energized Latinos at the polls in favor of Democrats on Election Day.

But with less than four weeks before the Nov. 6 midterm elections, there are signs that Democrats have room for improvement with Hispanic voters…

Latinos are positioned to help decide key races in California, Texas, Arizona, Nevada and Florida, where Democrats need to notch victories in order to take back the House and Senate. And while female voters on the left are extremely fired up, it’s unclear whether women alone are enough to power a blue wave in November…

“There cannot be an expectation that people are going to vote on the outrage period,” said Jose Parra, head of the consulting firm Prospero Latino. “You need to give voters something to vote for, not just against. You can’t have the attitude that Hispanics are going to vote for us just because the alternative is horrible.”

“Because there is an alternative: it’s called staying home,” he added.

Matt Vespa of Townhall has more:

If Democrats want a blue tsunami, well, the Latino voting bloc is forming a massive seawall to break a possible incoming wave. Democrats are also to blame for this, which is mentioned in the piece by Alex Seitz-Wald and Benjy Sarlin. The Democratic insanity over Trump is turning off whole hosts of voters to politics. Latino voters break heavily Democratic this year in terms of preference for who should control Congress, but no one is jacked up to vote this year (via NBC News):

In Nevada, incumbent Republican Sen. Dean Heller has been able to cling to a narrow lead by keeping a healthy 38 percent of Latino voters in his camp, according to a recent NBC News/Marist poll. And in the Las Vegas suburbs, handicappers just downgraded Democrats’ prospects of holding onto the majority non-white 4th Congressional District.

Not far away in California, where Democrats are well-positioned to overcome 80 years of Republican dominance in the wealthy suburbs of Orange County, two GOP incumbents, Reps. Jeff Denham and David Valadao, look relatively strong in heavily Hispanic parts of the Central Valley.

And in Arizona, Democrat David Garcia’s campaign to become the state’s first Latino governor has struggled to gain traction, even though Clinton came closer to winning that state in 2016 than any Democrat in years.

Republican National Committee Chairwoman Ronna McDaniel has been doing what she can to reach out to the Latino community on behalf of the GOP. FOX News reported back in March:

Like the midterms of 2010 and 2014, the outcome this fall is all going to come down to turnout.

Don’t all elections ultimately depend on turn out?

What is wrong with the women in this country that they see the crap sandwich the Democrats are pushing and think that is for them? What do the leftists truly do for women? Use them as attack pawns in a truly ugly and disgusting Supreme Court appointment battle, then drop them as quickly as last weeks garbage after the abuse they claimed falls apart. Yeah, that is empowerment. The left has created a hostile environment for men in the workplace that will harm women because of the #MeToo movement, and make it so men will not want to work with women without plenty of others present at all times, which creates major problems for leaner organizations which cannot afford to have larger teams of workers.

It also creates a much more difficult time for young men wanting to create relationships with women, as because of MeToo has made any instance of intimacy a danger for the future of the said young man.

The left lies about the inequality of the workplace earnings. And you have those morons who go around in the stupid pussy hats protesting because a corrupt and immoral woman lose to a man who frankly has done a lot of good for the country, though is flawed as human being.

As to Hispanics, if we are to believe the morality they generally hold dear and close, just as many blacks do, then why would they want leftists in positions of power with the immoral acceptance they push?

Tis something I just don’t understand about these divisional groups of people. The seem to love the leftists self hatred, and the left is certainly the party of hate.

“What is wrong with the women in this country …”

It is not just the women, and I speak as a woman who has a dear friend and several family members who are firmly voters for Democrats. This all makes sense, if you are aware of the river of misinformation from our primary political news sources in this country, namely The New York Times and the Washington Post.

It takes work to dig out the truth, and people who rely primarily on newspapers, and TV for their “news” — about half the country, even at this point, have a very different, even virulent, view of DJT and us. This is the outcome of the character assassination campaign of the Democrat Party at the national level, which seems hell-bent on destroying our social compact.

If, like me, you watched most of the Kavanaugh hearing (opening statements, testimony by Kavanaugh and Ford, some but not all of the closing statements, Collins speech), you know that the wrap-up smears by the Democrats, including Sen. Diane Feinstein, were luridly untruthful. But there are people of good will in this country who think that the entire exercise was evidence only that the good ol’ boy network in this country takes care of its own. Chuck Schumer, for example, is always in front of the TVs, always very sure of himself, and very convincing as he lies. For me, the worst part was watching Sen. Diane Feinstein doing a wrap-up smear, because I know she knows better, and she has done better in the past.

The US Senate is not the only problem. There is an unholy combination between our “national news” sources, and some businesses that have decided to arbitrate our national conversation.
For example, today’s San Diego Union-Tribune has an article planted by the New York Times titled “Soldiers in Facebook’s War on Fake News are feeling overrun.” It’s a story conveniently far away (the Philippines), which means it’s not yet received much scrutiny in the US.

That entire story relates to one incident, which may or may not have been satire, and then goes on and on and on about the poor, tired gatekeepers of FaceBook … in the Philippines.

Meanwhile, the very real censorship by FaceBook of harmless conservative voices in the US, together with their dismal failure to contain calls for murder from real terrorists, including ANTIFA, BLM, and even ISIS, has only been thinly referenced.

Meanwhile, the actual news this week is from Twitter, where some energetic souls decided to make the point that the bot and sock puppet activity on Twitter is overwhelming, and almost beyond parody. They made up a meme (cartoons of Non Player Characters or “NPCs”) that was readily identifiable (they even used NPC as part of the names of their “posters”), and posted outrageous SJW-type parody messages. These new accounts instantly reaped large numbers of new followers and gained prominence immediately. They were also immediately shut down by Twitter, once the trends became identifiable, which of course was childishly easy because the accounts were labelled.

Twitter was much slower to detect and shut down (if at all) the root bots and sock puppets that were the target of the exercise, especially the ones with the blue check-marks (“verified”).

Bear in mind that there are voters in this country who remain terrified about the consequences of having DJT as president, and Republicans in control of both Houses of Congress. Seriously, I’ve had to answer questions about whether Pence supported involuntary psychological re-programming of gays. What Democrats have been saying at the local level that does not make it into the press is even worse into the than what makes it into the newspapers.

“even worse into the than what makes it into the newspapers.”

–even worse than what makes it into the newspapers–

I had typing help from my cat, today.

I’ve been making this point ever since I started commenting online 20 or so years ago. As someone who has lived surrounded by Mexican-Americans for 30 years, I can personally vouch for how unpopular illegal immigration is among that voter bloc.

In fact, here in CA it’s the Latino community that has the most vocal and adamant in their demands to put a stop to it for almost a century. That is what Cesar Chavez’ famous march from Sacramento to the CA-Mexican border was for. Many of today’s open borders politicos marched alongside Chavez back then, Jerry Brown, Jesse Jackson and so many others.

Let’s not forget that Democrats ABANDONED the Dreamers when Trump wanted to meet and forge an agreement.

Dems were a no show.

Trump loves to expose frauds. Of course, the GOP also kept voting to repeal ObamaCare when it was a show vote with no chance of passing. Now that they control Congress and the White House and are assured of Trump signing, they won’t even talk about it.

There are all sorts of frauds in the swamp. Trump can only take on so many of them at one time.

Democrats have always had a “latino” voter problem. Most legal immigrant citizens, of this country, are much more conservative than the average Democrat voter. They are business people, entrepreneurs and are firmly entrenched in the small government ideal which will allow them to prosper. This is one of the main reasons why the Democrat Party has been attempting to allow illegal immigrants, especially low skill immigrants to vote. This people are much more likely to embrace a paternalistic welfare state.

As for women voters, the Democrats have been attempting to appeal to them by casting the “government” as a paternalistic force which will guarantee the safety and security of women and children. This is natural, given the basic nature of women. It is horribly ironic that the Dems [liberal/Progressives] have always been the biggest exploiters of women. But, women are no less intelligent than men. And, the hypocrisy of the Democrats is not lost on a large portion of that gender.

“Do Democrats Have a Latino Voter Problem for the 2018 Midterms?”

In a sane world they would.

Sheltering illegal alien gangbangers might not be helping the Democratic Party cause.

Both sides misread the Latino vote. The turnout is typically rotten but it is always democrat. The danger is the rotten boroughs it creates and the fake voter registration through motor voter and other democrat scams.

Obviously. Without them, Hillary wouldn’t be President today. And I’m sure they’ll be similarly reliable votes for lesser Democrats this year.