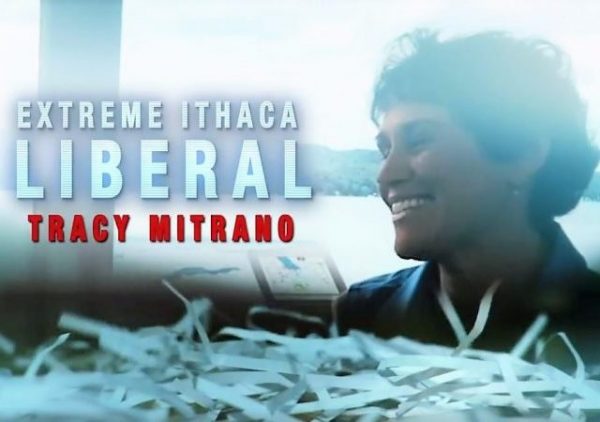 Tracy Mitrano is the Democrat challenger to Republican congressman Tom Reed in my home district, NY-23. The District is mostly rural and conservative, stretching over a huge territory in upstate New York’s Southern Tier.

The District was created after 2010 redistricting, and is R+6 even though it includes ultra-liberal Ithaca and Tompkins County. The redistricting boundaries, which were drawn by the courts, have left Ithaca liberals feeling isolated and angry in congressional races dominated by the voters with whom liberal Ithacans have little in common.

The 2nd Amendment is a big issue in NY-23, as it is in most of upstate New York. Opposition to Cuomo’s SAFE Act gun control law remains strong. Trump carried the district by 15 points in 2016, and Reed was one of the first to endorse Trump. Mitrano’s flip-flop (she was for it during the primaries, against it in the general) on a national gun registry has become an issue in the campaign.

Mitrano was not considered to have much of a chance, though her fortunes seemed improved when she raised just over $850,000 in the third quarter despite the district being rated Safe Republican. (Note: Mitrano’s campaign emails and press reports regularly claim she raised $950,000 in the 3rd Quarter, but that’s not what’s on the FEC forms filed.)

Based on her fundraising, the race was shifted by Cook Political Report from Solid Republican to Likely Republican:

NY-23: Tom Reed (R) – Southern Tier: Jamestown, Elmira, Ithaca
Likely Republican. Reed, the former mayor of Corning, sits in a heavily blue-collar district that voted for President Trump 54 percent to 39 percent after voting 50 percent to 48 percent for Mitt Romney in 2012. But it can’t be ignored that Democrat Tracy Mitrano, former Director of IT Policy at Cornell University, raised $855,000 in the third quarter and is on air attacking Reed for voting for a “$1.9 trillion tax giveaway for the wealthy.”

Reed has stepped up his campaign game since a close call in 2012, and is using the $3 million he’s raised this cycle to attack Mitrano as a “liberal Ithaca extremist,” a tactic that’s worked well against past opponents here, and for supporting “heroin injection sites.” At the end of the day, Reed can probably count on Trump’s popularity and Gov. Andrew Cuomo’s unpopularity to keep him secure, but it’s worth watching.

Nate Silver’s 538 had a similar shift, based mostly on the fundraising:

(The previous 538 rating of Safe Republican is here.)

All the major political rating groups rate the district either Solid Republican or Likely Republican, according to this chart from 538:

There is no public polling of the race. Sienna, which has polled some upstate New York races, has told me it has no intention of polling in NY-23. Mitrano had internal polling that was partially leaked in a deceptive way, and showed indirectly that Reed was about 15 points ahead, Rep. Tom Reed has commanding lead according to his opponent’s internal polling (#NY23).

In a September 12, 2018, public conference call-in, Mitrano’s campaign indicated they had pollsters in the field and hoped that the results would show the race tightening so that the Democratic Congressional Campaign Committee and other national groups would take an interest in the District. The Mitrano campaign has not released the results of that polling and has not responded to my inquiry about it. We can assume the polling was not good for Mitrano.

Reed received a tweeted endorsement from Donald Trump. That is likely to help in a district that went for Trump in 2016 by 15 points.

Ithaca liberals will be triggered, but outside of Ithaca, a Trump endorsement could help motivate Republican voters.

Reed’s “Extreme Ithaca Liberal” campaign theme has angered Ithaca liberals for the past two campaign cycles, in which it was successfully deployed.

Another person, a maxxed-out Mitrano campaign donor and supporter, has attempted to spread the theory that I am the person behind the “Extreme Ithaca Liberal” theme; I’m not, though I do think it is politically brilliant. And no, I’m not working for Putin (seriously, this is what this Mitrano supporter is spreading): 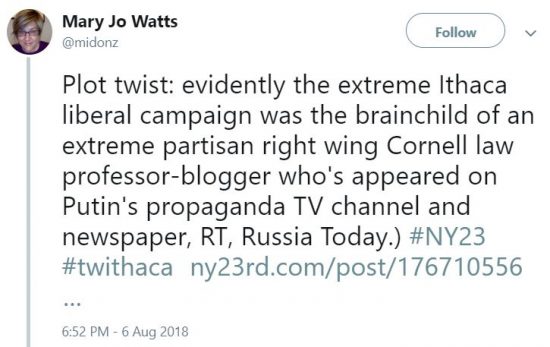 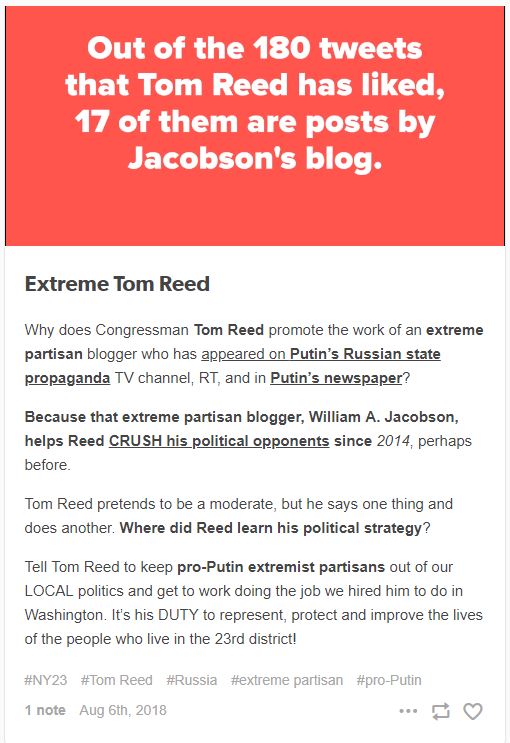 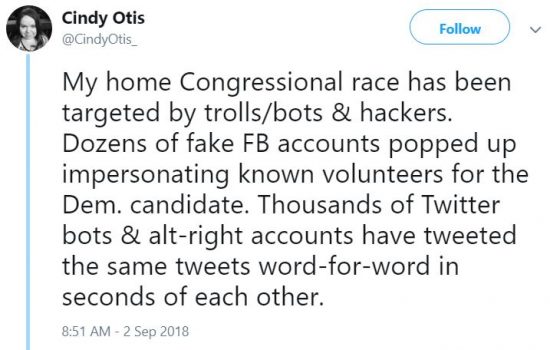 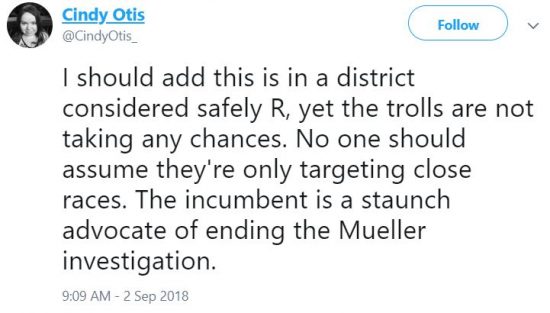 While delusional, this reaction shows how the Extreme Ithaca Liberal theme gets under the skins of extreme liberals in the district.

Mitrano has attempted to position herself as a moderate Democrat. She got a helping hand in a piece in the NY Times, She’s a Gun-Owning Democrat. Her Opponent Calls Her an Extreme Liberal.

Perhaps sensing the need to motivate the base and to counter Mitrano’s attempt to portray herself as a moderate, Reed has reinvigorated his “Extreme Ithaca Liberal” campaign theme that worked so well in the past.

In an October 14, 2018 campaign mass email, Mitrano complained about a mailer from the Reed campaign:

Tom Reed is at it again, with his favorite nickname for anyone who runs against him: Extreme Ithaca Liberal. Never mind that I live in Penn Yan—truth never got in the way of Tom Reed’s rhetoric.

Voters around the 23rd District have started to receive these flyers in their mailboxes: 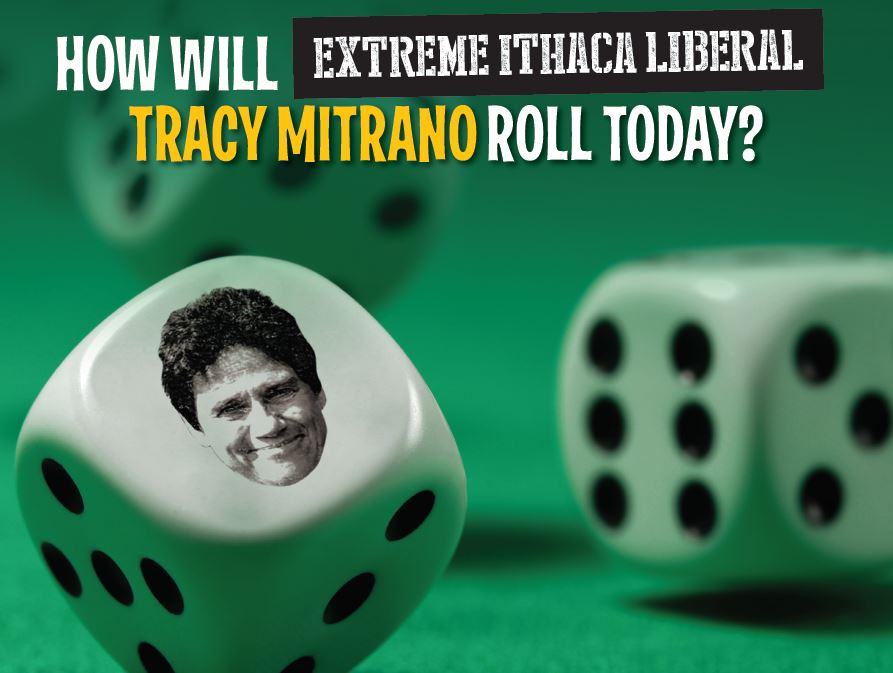 Here’s the other side of the mailer: 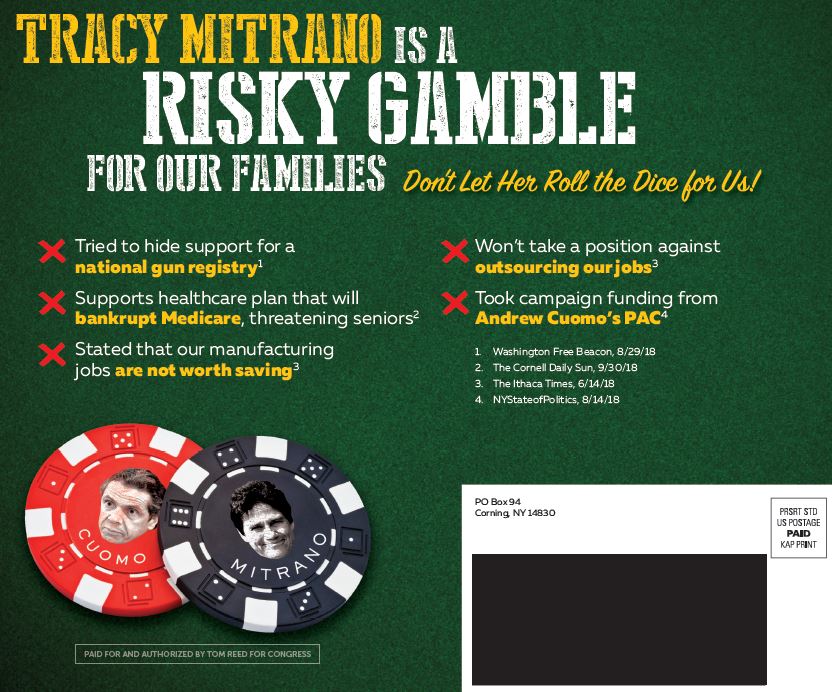 In a campaign mass email on October 24, 2018, Mitrano complained about ads Reed was running on TV attacking her as an Extreme Ithaca Liberal:

We’ve been hearing reports from supporters in the western half of this district that Tom Reed has been running TV attack ads nonstop this last week. It’s no surprise he chose to run them in that part of the district—it’s the most expensive part to get on the air. We write you one more time to ask for your help to counteract these dishonest and misleading attacks.

What has he been saying? For one, he’s trying his darndest to brand Tracy as an “Extreme Ithaca Liberal,” and he misrepresents her views on a number of culture-war issues that are sure to stir up his base….

This appears to be the ad in question, which Reed also has posted to his Facebook page with over 84,000 views as of this writing:

Mailers also have gone out recently on a similar theme: 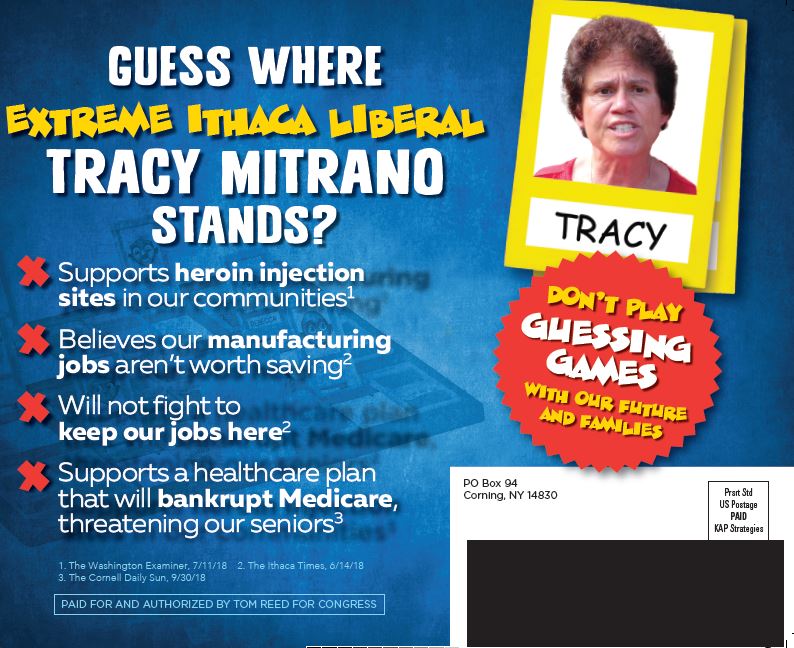 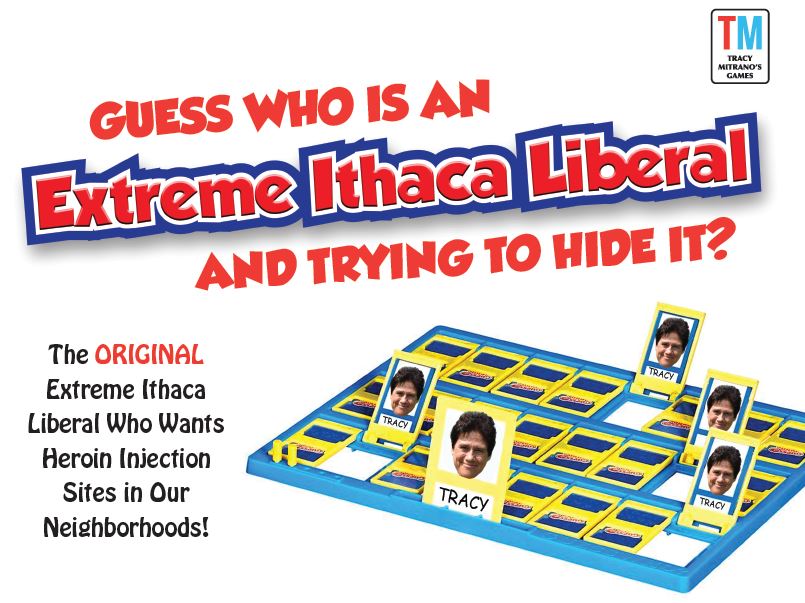 But Mitrano can hardly complain about negative ads. According to one of her campaign’s mass emails, she spent $200,000 in just one week in October on TV and other ads, such as this one attacking Reed:

Just because Reed’s “Extreme Ithaca Liberal” theme has worked in the past doesn’t mean it will work again. But it almost certainly will help.

In prior cycles, Reed needed to brand his opponents ideologically. While that may be helpful against Mitrano given her attempt to portray herself as a moderate, this time around I think it serves a different purpose.

Motivation and voter turnout, in my estimation, will be key to avoiding an upset. If Republican voters turn out in reasonable numbers, Reed will win. But if Reed supporters become complacent, and assume he will coast to victory like he has in the last two elections, and if Ithaca liberals and their compatriots around the district turn out in force, anything is possible.

So expect the “Extreme Ithaca Liberal” campaign to intensify in the next two weeks.

Finally we agree, Tracy: you are foul.

Tracy cries foul? Must be working.

Or maybe she cried fowl. Her campaign is a turkey, always ducking the issues, too chicken to state her real position.

I’ll drink to that, but I’ll take my Americana Chardonnay! As so many of us love our wineries where across the 23rd we all are somewhat near or very near a winery if not MANY wineries…Cheers to Tom Reed !

do they make an Extreme Ithaca Liberal t-shirt, and, if so, how do i get one?

i’m sure it would go over well here in Bluest Lost Angels!

Also we should be paying attention to the claudia tenney race, the dems have been pouring in tons of money in tv ads to unseat her.

I liked the 1968-style flowery-LSD visuals on the “Extreme Ithaca Liberal” signs back when Martha Robertson was the extremity in question.

” She’s a Gun-Owning Democrat. Her Opponent Calls Her an Extreme Liberal.”

Thought for a minute that the article was about the Junior Senator, But Gillibrand probably has gotten rid of any guns she might have had while a Rep in upstate NY.

I thought I couldn’t have more contempt for the left, but I just proved myself wrong – again.

For at least 50 years democrats are having calling republicans radical, extremists, and nazis without pushback. They are now practicing the same type of rhetoric as turn about is fair play.