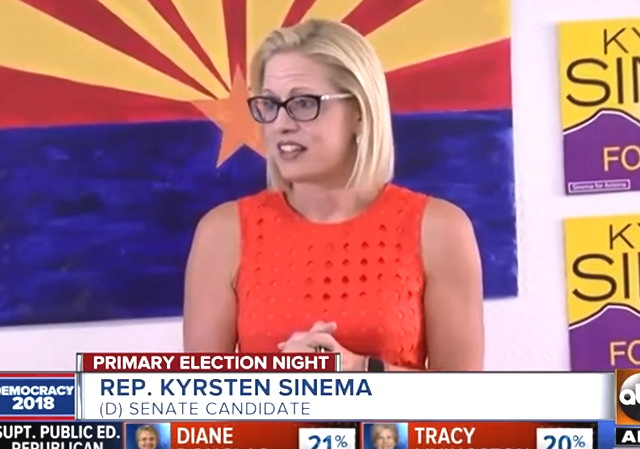 Arizona Democrat Rep. Kyrsten Sinema has been running a competitive race for a Senate seat in the state. But a video of her speaking in Texas in 2011 has surfaced which has the potential to do some serious damage.

Yesterday, we touched on the Arizona Senate race, wondering if a new poll showing Republican Martha McSally bouncing out to a six-point lead is an outlier or a trend. The GOP has sought to highlight Democrat Kyrsten Sinema’s past radicalism — she protested the Afghanistan war in a pink tutu, and her organization portrayed American soldiers as murderous skeletons inflicting “US terror” — as well as her biographical…shall we say, enhancements.

But in a blue-tinted year, with Democrats highly motivated, Sinema has held onto a modest lead. It will be fascinating to see whether she will maintain that lead post-Kavanaugh, and after this clip makes its way into the bloodstream, via news coverage and inevitable attack ads:

You can see the video in the tweet below:

Sinema is asking Arizonans to elect her to represent them. She thinks they’re crazy people and that other states should go out of their way to avoid being like her own constituents. And this speech was delivered well after she undertook her ideological makeover project.

Last night, Tucker Carlson reported on another toxic statement from Sinema. In 2006, she suggested that illegal immigrants who die in the desert trying to reach America are like American soldiers dying in Iraq. Watch:

At the time of this writing, Kyrsten Sinema is hanging onto a tiny 0.5 point lead over Republican Martha McSally, according to the Real Clear Politics average of polls.

It’ll be fascinating to see if these new revelations move the needle in the coming days.

Ms Sinema, I’ll give you the same advice I got from my governer, albeit paraphrased. “Don’t like it, move.”

Admittedly he phrased it as “Conservatives have no place in the state.” But really, if you don’t even like your state, you can’t fulfil the duty of representing it. Find a state you like better and run there.

If Arizonans still take pride in their state, that won’t fly.

Too many Californians moved here. They hated the government of Cali and moved out only to afflict AZ politics with the same voting trends. Twenty-five years ago she would never have won her state district.

Just for integrity’s sake, how many have said the same thing her WRT voting for McAnus…???

The difference is that none of us are now asking those same crazy Arizonans to elect us to the senate.

If AZ votes for her, they’ll prove her right.

“A bad Republican, or an even worse Democrat.”
Every. Single. Time.

Let her run and win, if she can. If she wins, then she has a fatal accident and the governor can appoint whomever he wants. Problem solved, assuming the governor likes the plan.

While the people of Arizona do seem to have some self loathing and blindspots based on who they have elected in the past to represent them I can’t believe they have completely gone over the cliff and would vote in that creature who openly despises them and frankly everything about the United States….or am I being too optimistic

Does the name “Obama” ring a bell? Or “Hillary”?

Arizona voters have neither blind spots nor self-loathing. RINOs keep getting elected because every cycle, the voters are given a choice between a bad Republican or an even worse Democrat.

That’s not really a choice at all, so it’s no wonder they keep making the same choice. In fact, that’s exactly what the GOPe counts on. That’s why the GOPe makes sure the race always comes down to this choice.

If McSally is a squish she is still better than Sinema.

“If McSally is a squish she is still better than Sinema.”

That’s not true.
A RINO in the majority is worse than a Democrat in the minority, because in the minority YOU HAVE NO POWER. My preference is to elect Sinema in order to prevent the election of another AZ RINO who will be entrenched for 30 years like McCain was. We should still have a sizable majority, so losing one seat won’t matter.

6 years from now, we vote her out since it’s still a red state and try for another conservative. That’s what the GOPe did to the base in the Alabama race (and several others). That’s how they keep CONSERVATIVES out of the Senate.

This is one tactic that can sometimes be used to our advantage, but it can’t work as the only tactic.
What we really need is a parallel power structure made for electing conservatives. If you don’t get their endorsement, then you’re not the best conservative in the race.

That would cut down on vote splitting, and would pre-vet the candidates for ideology so it would be tougher to lie to voters.

re:”….I can’t believe they have completely gone over the cliff and would vote in that creature who openly despises them…”

HuH? WTF? Just TWO little years ago over 50,000,000 American half-wits voted for Hillary, and before that Obama was voted in TWICE to office… It’s fair to say that these were TWO people that received a multitude of votes, yet they totally despised the American people and weren’t shy about sharing their feelings, although Obama was an exceptionally good liar. Hillary was so arrogant that she didn’t even think it worth her time to lie…

Yeah, the people of Arizona will vote for her – especially the men, if she tosses her taint around just a little. A nice juicy Brittany Spears wardrobe malfunction should do the trick rather nicely. “Juicy” is the operative word in that scenario. Yuck.

Maybe she should use the old Patsy Cline song “Crazy” as her campaign song! I’m sure the Arizonians would love that!

Hey now, Patsy Cline was a real musician – her voice could carry her songs without the need for voice-obscuring instrumentals or DJ mixing. Plus she was a classy lady who loved this country. Don’t link her with this kind of crazy….

Anybody else notice that nothing positive has been said about McSally?
This is the same way she ran her campaign against the GOP primary opponents: relentlessly negative.

That’s because when you look closely at her, she’s a train wreck.

We are afraid she is gonna turn into a squish, a ‘fem-Flake’ if you will. Her district is very liberal and we hope she represents the conservatives of the state also, not just her liberal constituents.

What are you gonna do? Can’t force good people to run.

Or stop bad ones. Joe Arpaio is quite a character and made a really good sheriff, but he had no business getting in the middle of the Senate race and confusing things. Of course McSally had the GOP establishment and lots of money behind her, not to mention an impressive resume, and probably would have won the primary anyway.

I know a local political operative who is well-experienced and agrees with me: if Arpaio hadn’t run, Kelli Ward would’ve gotten more votes for “being within striking distance.”

If it had been McSally 51%, Ward 49% in the polls it would’ve changed minds. But nobody’s gonna change their vote to tilt at a windmill.

Good lord what is it with Democrat women and GIGANTIC glasses?

…..”Arizona voters have neither blind spots nor self-loathing. RINOs keep getting elected because every cycle, the voters are given a choice between a bad Republican or an even worse Democrat.”

Sorry Matt but the ultra extremist leftwing nut job being offered up by the Dems…well she makes McSally look like Mike Lee in comparison….anyone in AZ not running or crawling to the polls to vote for anyone to keep her out of power is being a short-sighted idiot who must enjoy wrapping themselves in their GOP martyr robes of you never give us anyone good to vote for.

Saw on another site someone said she was the Ron Paul of the Arizona legislature.
She’s had more stuff come out, she’s beyond nuts. But she’s a democrat so that’s normal for them.

Sinema is a whackjob moron.