Cherokee author: “I Won’t Support An Elizabeth Warren Presidency While She Appropriates My Identity”

Cherokee author: “I Won’t Support An Elizabeth Warren Presidency While She Appropriates My Identity”

Rebecca Nagle: “If Warren falsely claimed to be related to the queen of England or Elvis, people would dismiss her as a kook” 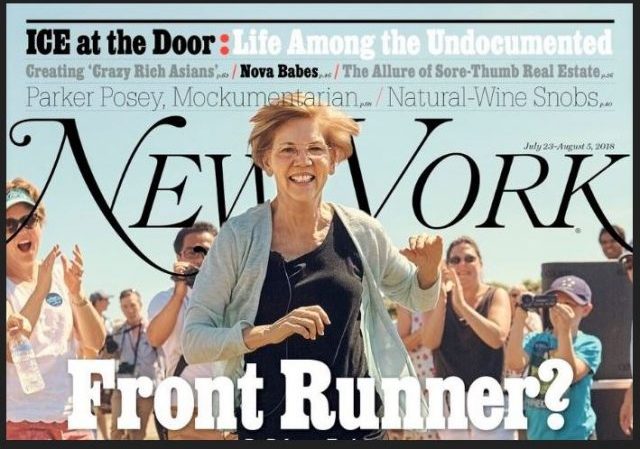 Elizabeth Warren is going to run for president, that’s becoming more clear by the day.

Among Warren’s pre-planning is trying to shed the problem that has dogged her since 2012, her false claim to be Native American.

Warren has used the Boston Globe and other friendly outlets to claim that she never actually benefited from claiming to be Native American for employment purposes. But that is somewhat besides the point. She tried to benefit from misappropriation of Native American identity, and that doesn’t sit well with Rebecca Nagle.

Nagle is a member of the Cherokee Nation. She previously has written critically of Warren at the left-wing Think Progress in a November 2017 op-ed that generated a lot of attention, I am a Cherokee woman. Elizabeth Warren is not:

She is not from us. She does not represent us. She is not Cherokee….

Sen. Warren needs to accept responsibility for misappropriating Native identity for her own economic and political gain. To help her, I have drafted an apology, which she has my full permission to appropriate. Every last word:

I am deeply sorry to the Native American people who have been greatly harmed by my misappropriation of Cherokee identity. I want to especially apologize to the over 350,000 citizens of Cherokee Nation, Eastern Band of Cherokee Indians and the United Keetoowah Band. In my family, there is an oral history of being Cherokee, however, research on my genealogy going back over 150 years does not reveal a single Native ancestor. Like many Americans who grew up with family members claiming to be Cherokee, I now know that my family’s stories were based on myth rather than fact. I am not enrolled in any of the three Federally recognized Cherokee Tribes, nor am I an active member of any Cherokee or Native American community. Native Nations are not relics of the past, but active, contemporary, and distinct political groups who are still fighting for recognition and sovereignty within the United States. Those of us who claim false Native identity undermine this fight….

Nagle has just published an even more blistering indictment of Warren, at the Huffington Post, I Won’t Support An Elizabeth Warren Presidency While She Appropriates My Identity:

On Saturday [September 29, 2018], Sen. Elizabeth Warren said she would “take a hard look” at running for president in 2020. As a registered Democrat, I agree with a wide range of Warren’s policies. But as a Cherokee woman, I cannot support her until she rescinds her false claims of Cherokee and Delaware heritage….

Warren openly admits you won’t find her family “on any rolls” — a line that raises red flags only for the very small sector of society that is knowledgeable about Cherokee genealogy. The widespread myth that scores of Cherokee were simply left off records whitewashes a brutally violent history….

The issue with Warren is not that she isn’t on any rolls, that her nonexistent blood quantum is too low, that she can’t pass a DNA test or that we lack information about her family. The issue is that she claims to have a Native ancestor when there are none….

If Warren falsely claimed to be related to the queen of England or Elvis, people would dismiss her as a kook. If she falsely claimed her family members were survivors of the Holocaust, she would be admonished for appropriating and diminishing a genocide. Why are easily refuted claims to Native identity treated differently? …

We don’t know yet if Warren will run for president in 2020, but I know I will not vote for her or stop speaking up against her gross appropriation of Native ancestry until she stops claiming it. Her persistent claims to an ancestry that doesn’t belong to her send the message that the true history and lives of Indigenous people don’t matter.

Will Warren’s false claim to be Native American sink her presidential ambitions?

But it is an issue that won’t go away. Trump has sought to brand Warren as a faker.

The GOP War Room is on her trail as well, catching this somewhat awkward at an anti-Kavanaugh protest:

At a protest in Washington, D.C., anti-Kavanaugh demonstrators yell at Sen. Elizabeth Warren (D-MA), who once claimed to have Native American ancestry, to remind her to include Native Americans in her list of minority groups who she claims to champion.

You’d think that these Democrat front runners would be DOA as far as normal voters are concerned, but after Hillary I guess they could run a sack of fermented dog crap and still get half the vote.

What do you mean, “After Hillary?” I believe I saw a sack of fermented dog crap getting tossed into the Scooby van on the date of the 9/11 memorial back in 2016.

So if Fauxcahontas stops appropriating her identity, the author will vote for this corrupt psycho.

Warren is too easily provable as a fraud. Not just in the ancestry thing, but also in her advocacy for the little guy.

President Donald J. Trump has already said he would hand her a DNA kit at the first debate. I would love to see that, but done like a mike drop. Drop in on her podium then walk off the stage. I don’t know if it would top “Because you’d be in jail.” but it would end any chances she had on the spot.

The closest Warren comes to being Cherokee is being cheeky.

Elizabeth Warren is angry. ANGRY. You can tell by the way she raises her scrawny arm in the air and moves it around awkwardly.

The idiotic Boston Globe ran an article saying she has turned the John Kelly story into ‘Impolite arrogant woman’: Elizabeth Warren turns John Kelly’s insult into a rallying cry’. What a crock, hopefully the red wave sweeps her from the Senate this November 6. She will blame collusion with the Cherokee nation.

Who appropriates his identity or his laundry.