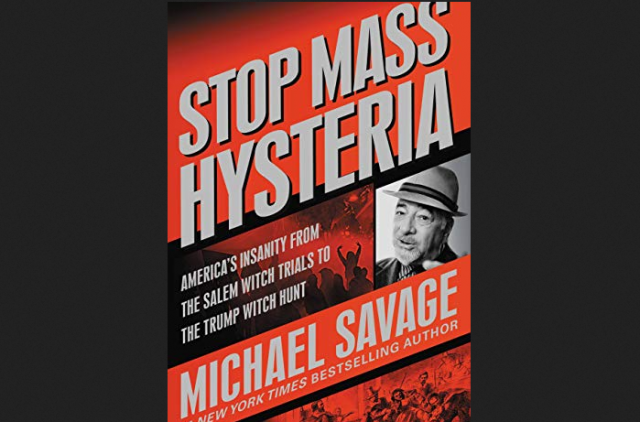 I have a confession to make before reviewing the latest book by conservative icon and author Michael Savage: I am not a big fan.  There is no denying that Savage is exceptionally smart and deeply passionate about this country, the U.S. Constitution, and conservative principles. On his radio show, his vitriolic and pessimistic take on subjects differs from my normally optimistic, humor-oriented view of politics and current events. I normally don’t stay tuned in for very long when I alight upon his radio show, as Savage’s tone can be a bit too bitter for my personal taste.

However, his latest book, Stop Mass Hysteria: America’s Insanity from the Salem Witch Trials to the Trump Witch Hunt, is a smart, engaging, and timely look at angry mobs and their historic consequences.

Savage reviews a plethora of mass hysteria events and ties it into today’s hysterical antics and vile tactics of progressive activists and their elite political leaders.  He deconstructs the Left’s crazed response to American values and traditions by detailing episodes of mass hysteria impacting this nation from Christopher Columbus to the Salem Witch trials to the “Red Scares” of the 1930s and 40s and right up to the current social justice trend of dictating what race actors must be in movies and plays.

Given the banshee-like displays of crazed activists during Justice Kavanaugh’s confirmation vote, there is no arguing that Savage is completely on point.

This anti-Kavanaugh protestor got arrested and screams like an animal…

Absolutely crazy to behave this way at the Senate.#MAGA ???????? pic.twitter.com/l7h4pTULbw

Perhaps my favorite passage of the book features Star Trek (albeit The Next Generation). The opening of the paragraph discusses the 14th century flagellation craze to assuage sin and guilt, and how “aging white baby boomers” support social justice activism to atone for supposed cultural sins.

“I saw a photo online of the seventy-seven-year old actor Sir Patrick Stewart — a British citizen who made his fortune in America in Star Trek: The Next Generation TV series and firms — holding a sign that said, “People will not listen unless you are an old white man, so I’m an old white man and I will use that to help people who need it.

“After Donald Trump’s election as president, Sir Patrick also applied for US citizenship to “fight” him. That was his word, mind you. “Fight”. A combative, violence-inducing word chosen to roil those who haven’t the wit to distinguish him from the benign, high-minded captain he played in Star Trek.”

Interestingly, as the Kavanaugh confirmation successfully concluded about the time I finished the book, I noticed many more references to the leftist mob and its attempt to rule by fear and intimidation.

You don’t hand matches to an arsonist, and you don’t give power to an angry left-wing mob. Democrats have become too EXTREME and TOO DANGEROUS to govern. Republicans believe in the rule of law – not the rule of the mob. VOTE REPUBLICAN!

When reading the book, I swear I began “hearing” the words in my mind as if they were being spoken in Savage’s distinctive voice. If you are a fan of the pundit, and enjoy history, you will relish Stop Mass Hysteria as an informative, compelling page-turner.

In conclusion, I give it 4.5 of 5 stars. Some of the conclusions Savage reaches are still too dark for my taste, but I must admit I enjoyed reading his newest book tremendously.

But for Savage savagely calling out the elephants in the room in the manner he did, those elephants might have crushed us by now.

Also, Alex Jones was the leading voice calling out American globalists trying to sell out our country.

Fortunately, McCainism is now as dead as McCain.

Without McCain’s rose covered glasses filtering what his eyes were seeing, Graham got a chance to see up close the raw power hungry nature of the other side that once, so many years ago, he saw when he got elected.

Alex Jones is a 9/11 Truther. Why would you even bring him up here? I am beginning to think Fine Report is a deep cover Dem operative who posts borderline Alt-Right things here to delegitimize this entire blog.

With that out of the way…

Jones might be a 9/11 ‘truther,’ but you cannot refute he led the alarm of the globalist threat rotting within both political parties.

With that said: back to being a deep cover Dem operative who posts borderline Alt-Right things here to delegitimize this entire blog.

Everyone believes something that others find weird, sometimes downright unbelievable.

I personally believe two of those things and I think a third is more likely than not. Does that mean I am always wrong because you don’t believe the same things I do?

Look at Kanye West. I don’t like him (or rather what I’ve heard), I don’t like his music, and I think he may be unhinged. But he made a few good points the other day at the White House. I will concern myself with the message while quietly slipping the limo driver a $100 to take this fool back where he came from. Same with Alex Jones or Michael Savage.

So you are saying you are actually a creepy alt-right troll who posts here to promote your website. And your actual posts, which tend toward the racist and misogynistic, can be used to delegitimize the otherwise excellent news and opinions found on this site.

If only Savage had been born with Mark Steyn’s wit and temperament.

I agree, the vitriol, true and justified as Savage is on his show, is not something I like to feed my soul and tune out when its on.
These days even Shapiro is pushing the threshold for me…but at least he has the courtesy of getting to the point in no more time than is necessary.

Left-wing mobs attempt to rule by fear and intimidation? New York Democrats certainly are leftist and Trump has always been a NY Dem.

“You don’t hand matches to an arsonist, and you don’t give power to an angry left-wing mob. Democrats have become too EXTREME and TOO DANGEROUS to govern. Republicans believe in the rule of law – not the rule of the mob.” ~ Donald J Trump tweet

Donald Trump is exceedingly and constantly angry and he treats his people like shit.

Donald Trump is ill-prepared mentally to deal with the responsibility of governing.

Trump oversimplifies and never studies the complexities of the presidency – he is acting out his fantasies rather than accepting the burden of reality.

Most assuredly, as has been demonstrated in his wars with his own people and the illegal acts for which he has been (or is likely to be) convicted – his whole life of crime is an advertisement that he believes the Rule of Law is for everyone else.

Trump’s angry mob appears at every one of his numerous gab-fests known as campaign rallies or in the form of the new Trumpists known as “The Proud Boys.”

EXTREME and DANGEROUS! Words that fit Donald Trump precisely. I can only hope that Bobby Three Sticks thinks along those lines as well.

Well you convinced me with that brilliant 5 star argument.

Trump owns you. He lives rent free in your head. Every 3rd thought that crosses your mind is about Trump or those who voted for him. YOU lack the capacity to live your life, except in a fitful rage about Trump. You cannot enter into casual conversation without flying into tirade about Trump. You cannot have a holiday with the family w/out Trump being the center of conversation- whereby your blood pressure goes through the roof.

You are not “for” anything, just against Trump, your life is not directly impacted by anything done by the executive branch, yet you fly into outrage a whatever topic de jour the media serves up for your daily dose of outrage.

Gadzooks, egad! President Donald J. Trump is the greatest president of our time, perhaps of all time!
He is different than the others who preceded him and many people dislike change. However, change is the only constant. He is winning bigly!
If you say things like the above too often, Bill Kristol might ask you to run for POTUS! Bill loves him some gad-flys.

Sadly, that screeching in the Senate is not banshee-like, it is female radical-Moslem-like. It’s been shown many times on video – when the Towers came down it was all over TV.