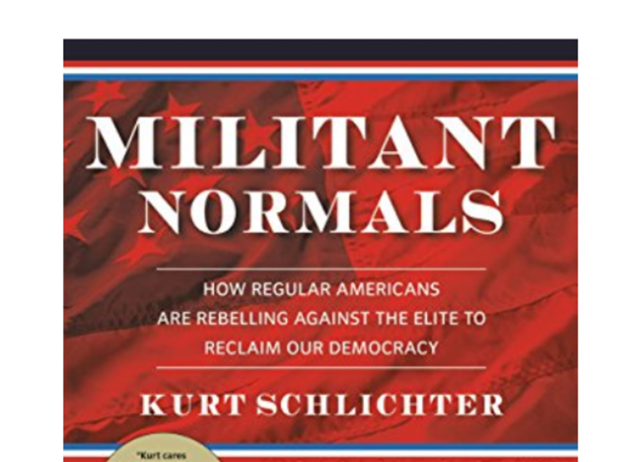 Clearly, one of the industries helped most by the election of President Donald Trump is the book publishing business.

“Fire and Fury,” “A Higher Loyalty,” “Fear”: three books about Donald Trump have each sold more than a million copies in the United States, a first that reflects Americans’ fascination with their ever-surprising president.

The great majority of successful books on politics have been written by politicians themselves — or by ghostwriters working with them.

The latest entry in the political genre is from Townhall columnist, California lawyer, and witty conservative pundit Kurt Schlichter. Fun fact: He attended University of California – San Diego as an undergraduate at the same time I was a graduate student in chemistry there. Perhaps his writings in the campus newspaper (The Koala) affected me subconsciously, as I became an independent conservative 5 years after my graduation.

The quality and strength of Schlichter’s writing cannot be over-stated. However, does this book distinguish itself from other pro-Trump or pro-Deplorable books that are on the market?

That depends. If you enjoy Schlichter’s succinct, humor-filled description of the current state of politics in America and would like to support his punditry, then there is much to savor in the pages of his latest book. In this publication, Schlichter offers his views on the cultural schism between the regular Americans (the Normals) and those that have governed the institutions (the Elites). His treatise is that the Elites broke their cultural contract with America when they sought to diminish the country and be “globalists.” The Normals became militant when this trend continued unabated, and President Donald Trump’s election was their response.

However, if you are looking for new insights, or a perspective that is a bit different than ones offered elsewhere, then perhaps another book would be a better match.

For example, I was a bit taken-aback by the detailed description of a supposed “Elite” named Kaden that formed a significant segment of Militant Normals. To begin with, I have friends who are Democrats, liberals, and Clinton supporters who do not resemble the caricature offered, so that struck me the wrong way.

Furthermore, the description of “Normals” was much better handled in Salena Zito’s book, The Great Revolt. Zito’s book was filled with substance and complexity, giving you a real sense of the wide variety of Trump supporters and how they arrived at their position.

Finally, the examples and remarks comparing and contrasting “Normals” to “Elites” was repetitive. I almost get the sense that the work was a compendium of great blog posts smoothed over into a book.

However, there is one area in which Schlichter’s book most certainly shines and offers food-for-thought: The description of the #NeverTrumpers. If you are like me, especially in the late 1990’s or early 2000’s, you were once eager to hear the thoughts of Bill Kristol, George Will, and even Jennifer Rubin.

Schlichter’s dissection of the #Never-Trumpers and their antics during the 2016 election and its aftermath is riveting and thoughtful. Here is a passage on Kristol, the Captain Stubing of conservatism, to give you a flavor of his writing:

“But Normals was never [Kristol’s] motivation. They were a means to an end, sheep to be sheared, a way to leverage himself more prestige within the Elite. It got him on television, where he mouthed unremarkable things in an unremarkable manner, and it created the impression that he mattered.

Trump demonstrated that he didn’t matter.

He unleashed upon Trump and those who supported him with a ferocity he would never deploy against fellow Elitists.”

Personally, I would welcome a book that did an in-depth, detailed, but entertaining review of #NeverTrumpers. I would find it incredibly valuable as a guide to avoid following those who are not genuine in the future.

In conclusion, I give Militant Normals 3.5 stars out of 5. If you like Schlichter and wish to support his work, or would just like to relish incredibly satisfying pro-Trump analysis, then it is worth the $13.99 Kindle/$17.70 hardback.

The day I let politics dictate my friendships and relationships is the day I retire from politics entirely.

I lost many friends after this election. I didn’t end the relationship, they did. It’s a sorry state of affairs. There is nothing more vindictive than a woman.

I must have missed reviews of these books in the mainstream press.

Oh, they weren’t? Because MSM book reviewers lean so heavily on politics (even in works of fiction) when determining what to review and how to review it, I’ve come to think of these review pages as “politbook.”