“The number of Republicans that have been casting ballots, they have to be very happy.”

I remember a few days ago it was all about the Democrats voting early in the midterms and boy they were going to bring a blue wave.

I hate to disappoint the left, but Republicans have shown just as much energy as they have outperformed Democrats in early voting except in Nevada.

Republicans shouldn’t get ahead of themselves since Cook Political Report changed the rating of 10 House races this morning, including eight to favor the Democrats.

As of Monday, 5 million Americans have voted early. 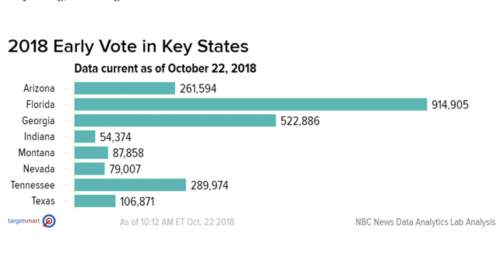 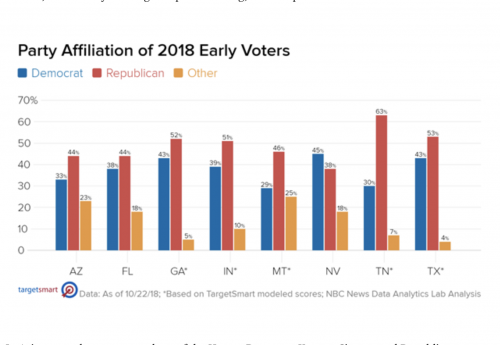 You have to remember that Republicans generally beat out Democrats when it comes to absentee voting, which is a form of early voting, and that Democrats outpace Republicans by voting early in person.

North Carolina also reported a huge showing in early voting with 431,000 people showing up after five days. From WFAE:

The number of registered Republicans who have cast early votes is up by 44 percent compared with the 2014 midterm election, according to Democracy NC.

“The number of Republicans that have been casting ballots, they have to be very happy,” [Political Science Professor Michael] Bitzer said. “There was a lot of concern about depressed enthusiasm, but this shows they are as energized as anyone thought they would be.”

Democrats have seen their numbers increase as well, but not by as much. There’s been an increase of 26 percent in registered Democrats voting early compared to the same period in 2014, according to Democracy NC analysis.

Nearly twice as many unaffiliated voters have cast early votes so far, compared to 2014.

Bitzer said one potentially troubling sign for Democrats is that black voters haven’t seen their participation numbers increase at the same rate as white voters. Black early voting is up just 9 percent from 2014, compared to a 52 percent increase in white voters.

People in Cuyahoga County, which houses Cleveland, OH, have voted early, especially with Republican and unaffiliated voters. However, a new law changed a lot of Democrats “to unaffiliated if they weren’t voting once every four years.” From Cleveland.com:

Mail-in and in-person early voting 18 days out from the 2014 general election in Cuyahoga County:

How Much Will It Matter?

It is good news for Republicans that more of their voters have shown up. But how much of it will matter?

The Cook Political Report changed 10 races this morning and eight of those went in favor of Democrats. Granted, some not by much, but it could still make an impact. 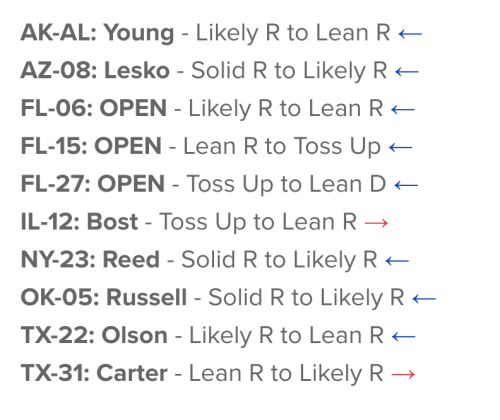 However, Democrats’ staggering success in third quarter fundraising reports injects some last-minute uncertainty. An astounding 112 Democrats outraised GOP opponents in Republican-held seats between July and September. Of the 93 GOP incumbents who were outraised, 20 are currently in our Likely Republican column and 23 in Solid Republican. Democrats’ late dominance in the air wars could produce several Election Night surprises.

Today, we’re changing ratings in ten districts, including eight where Democrats’ position has improved. Democrats now have a clear advantage in 17 GOP-held seats and Republicans have an advantage in two Democratic-held seats. If the 30 Toss Ups were to break evenly between the parties (15 seats apiece), Democrats would score a net gain of 29 seats, six more than the 23 they need to retake the majority.

Nate Silver just released his numbers projecting 1 in 7 odds of GOP holding on to Congress. We should be worried this it the guy who gave Hillary 95% probability of winning the 2016 elections the day before.

Info like this could affect voter turnout on Nov 4. It’s why I’m against early voting and releasing any voter numbers before the poles close EVERYWHERE in the country.

You’re supposed to blame it on auto correct…. at least I always dew… 😉

notamemberofanyorganizedpolicital in reply to Liz. | October 23, 2018 at 4:26 pm

Nah, blame it on the Deep State spies….

Trump: ‘The Only Way To Find Out What Happened At The Saudi Consulate Is To Send In More Journalists One At A Time’

Anecdotal evidence, FWIW: I drove by a couple of polling places yesterday and they were overflowing the parking lots in areas where Republicans hold about a 2-1 registration edge.

I loathe polls! I’ve been getting more calls than usual and will not answer. Polls should be banned because they can depress turnout.

As the Democrats push Vote Early and Often…

I have a hard time believing that all elections will be without fraud. The fraud might be tough to compensate for.

If you knew with virtually certainty that the votes of citizens were being intentionally suppressed, would you be outraged or would your attitude approximate ‘Winning isn’t everything, it’s the only thing.’?

Ironic that Kobach found more elderly republicans voting in 2 states than illegal immigrants – and that is his pathetic claim to fame.

Proper conservatives vote on Voting Day. None of this newfangled early-voting kid stuff.

I live in a county which splits Herrara’s (R) district and the one north of that Denny Heck (D) in Wa state (olympia).

There are almost no signs posted along the roadside or in yards. I expect conservatives don’t want their stuff trashed and are more reserved anyway, but the dems here usually go full throat for elections. Normally we would see 20-30 “give congress Heck” signs in yards between our home and I-5. We counted this weekend and there is 3.

We count no signs for Cantwell(D) or her (R) challenger who got destroyed in the primaries (we are a top two primary state).

Most of the signage that is out is for local races and for state initiatives. Dem enthusiasm here appears to be through the floor.

We’ve done a good job of cable cutting, listening to podcasts, screening junk mail, and screening phone calls, so we may be shielded from the usual tedium, but to me, this election feels very bizarre.

People I know who didn’t like Trump, still don’t like him because they think he’s a jerk, but they are muted about it because of the accomplishments in the economy.

anyway, that’s my pulse from this neck of the northwest left coast.

This is an interesting metric; almost encouraging. Thanks for the info, Mary.

Maybe it really is the economy.

My husband and I were two of them. Yesterday morning. Outside Houston, TX.

Do you enjoy watching the football pregame shows? If you do then you will enjoy polls. No matter how hard or how much we talk about the upcoming election, we will know who won AFTER the election is over. I am optimistic but all of the poll talk is just hot air.

At my doctor’s appt today, she actually told me to make sure I voted!

She left the university practice group for a direct patient care practice. She’s happier and so am I. We talked health care & politics and my BP didn’t even go up.

I’m still looking for those Senate races that need another donation or two. Gave to twelve hopefuls already and checking the polls to follow-up on some of them.

If you can’t vote or work for a campaign, consider making a donation to support them. I’m rooting for John James in Michigan as well as a few others. This is the one time that saying “Go Blue” is kinda awkward.

Here’s the issue, republicans have to win outside the margin of fraud. Every time!

Campaign funds just don’t have the impact that they used to.

2016 should have served as a reminder. Raising money and buying ads for people to ignore is the old way. Fundraising is being given way too much weight in the forecast models.

It should also be noted that Cook had Dems winning 278 Electoral votes, R’s winning 214, and 46 tossups.

I voted early at the registrar of voters because I had to leave the state to care for an ill sister. I was the only one there voting early when I went. Not surprising for in the Bay Area.

I just took my sister to vote early in Nevada. Possibly the reason you are seeing so many voting early in Nevada is the state is taking away the rural voting places. They are allowing early voting in rural areas for a few hours on one assigned day (today was my sisters’s day from noon to 5.) On election day her assigned place is now 14 miles and 25 minutes away. Many people who live farther away will have to travel even longer. My sister doesn’t know why Neveda is doing that but many of the rural polling places are being closed. When I took her today the fire station’s parking lot was full and they had been busy since opening.

There’s no early voting in NY, but based on the turnout at the state primary last month they’re expecting record numbers.

I work the polls, and last month, for 209 registered Ds in my district (which is one block) they provided 150 ballots; to my surprise I went through 110 of them. This time they’ve announced they’re going to print enough ballots for all registered voters, plus an extra 10% to allow for voided ballots and affidavit voters. (It’s going to be a 2-page ballot so I’m expecting a lot of voids.)