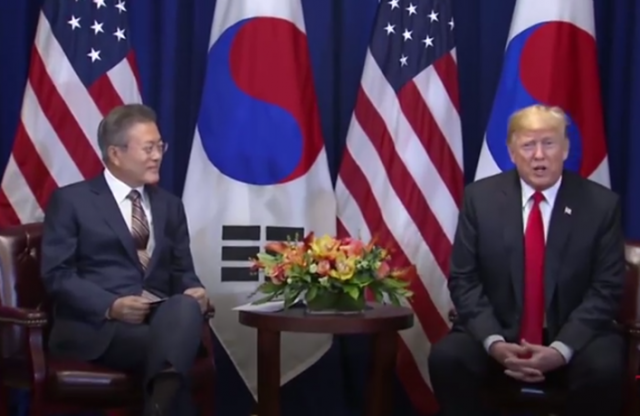 Fresh off his visit to North Korea and ahead of the United Nations General Assembly meeting, South Korean President Moon Jae-in signed a free-trade agreement with the United States, marking the first time the President Donald Trump has finalized a major trade deal since entering office.

The signing ceremony in New York on Monday represented key progress for proponents of free trade between the partners, as Trump last year reportedly planned to withdraw from the pact, which came into effect in 2012. Trump during his election campaign called the original agreement a “jobs killer” and complained its terms had contributed to America’s growing trade deficit.

As part of his push to rebalance global trade in America’s favor, the president is also negotiating changes to the North American Free Trade Agreement and is pressuring China to lower its barriers to American products. Nafta negotiations are ongoing, while there are few signs of progress with Beijing.

Trade analysts say changes to the South Korea agreement were largely cosmetic, as the president limited the scope of renegotiations by declining to invoke U.S. trade law that would have required congressional approval of the final deal.

The terms of the new pact included modifications to tariffs and automotive quotas.

Trump called the agreement a “historic milestone” although the changes agreed upon — doubling the number of U.S. automobiles that can be sold in South Korea and keeping a tariff on South Korean steel in place through 2041 — were largely cosmetic, given that a broader renegotiation would have required approval from Congress.

“This agreement will reduce bureaucracy and increase prosperity in both of our countries,” Trump said.

In their bilateral summit held in New York, the leaders of South Korea and the United States also agreed on the need to show North Korea a bright future following its denuclearization.

“The leaders agreed to seek ways to encourage North Korea’s denuclearization process by showing a bright future it may enjoy once it reaches complete denuclearization,” the Cheong Wa Dae spokesman said.

However, for the time being, the sanctions on North Korea remain in place.

Secretary of State Mike Pompeo told reporters at another press briefing that he hoped to travel back to North Korea before the end of the year to make final preparations for a second summit.

“I expect I’ll be traveling to Pyongyang before too long,” he said.

Pompeo said he was optimistic that Kim would deliver on his pledge to denuclearize, but this would take time.

“We’re bringing the two senior leaders, the individuals who can actually make the decisions that will move this process forward, bring them together so we can continue to make progress towards what the U.N. Security Council has demanded and what Chairman Kim has promised he would do.

This Christmas season appears to be on its way to being substantially more filled with peace and good will than the last one, at least in terms of the American relationship with foreign entities. Our interpersonal domestic relationships are proving to be much less tranquil.

“This agreement will reduce bureaucracy and increase prosperity in both of our countries,” Trump said.

But we know he lies. A lot…

Unlike you, of course LOL!

Give it a rest. Does it ever occur to you that you may, in fact, be mistaken about the man?

Have you ever been wrong before?

You mean that he lies? No. He proves it just about daily.

His supporters lie, too. This is “free trade” like BK is a gang rapist. Read the story Leslie carefully cropped pieces from.

I can be wrong. So can you.

Things you don’t like are not the same as lies.

Yes, I know. Lies are lies. T-rump lies. Everyone with the capacity to discern knows this.

You said ‘he’ when you meant to type ‘I’

No, I said what I meant, and it’s true. Like other things I say. You can lie about all that. It won’t make a difference.

Rags, you are frankly tiresome in your delusions.

You mean my refusal to adopt YOUR delusions is grating on you.

I can see that. Sorry.

T-rump lies. He lies a lot. What he said above is a lie.

This abomination with South Korea is NOT “free trade”. It is rather the OPPOSITE. T-rump does not want “free trade”. He wants central planning, which is just stupid, economically harmful, and evil.

He did even better than that. He is in agreement with Russia and China.

As The Intercept reported last week, the Trump administration assembled a number of hard-line countries, including Russia, China, and Saudi Arabia, as partners before sending out the action plan to all member states. The Philippines — where President Rodrigo Duterte’s drug war has drawn international criticism for its extrajudicial killings and brutality — and Myanmar, whose government stands accused of genocide, were both included on the final list.
https://theintercept.com/2018/09/25/donald-trump-united-nations-drugs/

Here is more about the program The Donald got Russia and China to join? Globalism at its finest. Funny that it was not reported in the pro or anti Trump press.

President Trump just signed on to the Globalist Drug War. At the UN. At a meeting he sponsored. Who else is covering it besides me? The CTH (link at the link)
http://classicalvalues.com/2018/09/the-dea-and-the-drug-cartels-own-trump/