Trump calls on FBI to find out who leaked Christine Ford’s letter: “Was it Sen. Feinstein?”

Trump calls on FBI to find out who leaked Christine Ford’s letter: “Was it Sen. Feinstein?”

“Certainly her body language was not exactly very good when they asked her that question.” 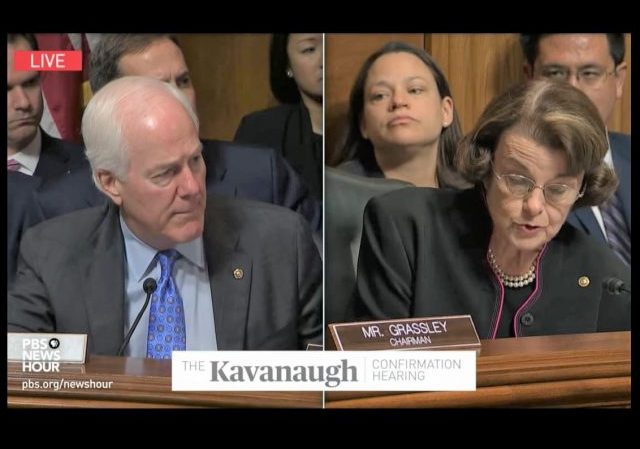 Kavanaugh has denied the accusation of assault set forth in the letter, and vigorously defended himself at the hearings. Each of the people Ford has identified as being present during the party in question has denied being at such party.

During the hearings, however, the question arose as to who leaked the letter to the media.

It wasn’t Republicans, because only Feinstein’s office, the office of a Democrat congresswoman, and Ford’s Democrat lawyers had the letter.

Now Donald Trump is calling on the FBI to investigate the leak.

.@POTUS: "I would like to find out as part of [the FBI investigation] who leaked the papers." pic.twitter.com/fDY5XEezMK

Here is the pool report of Trump’s comments: 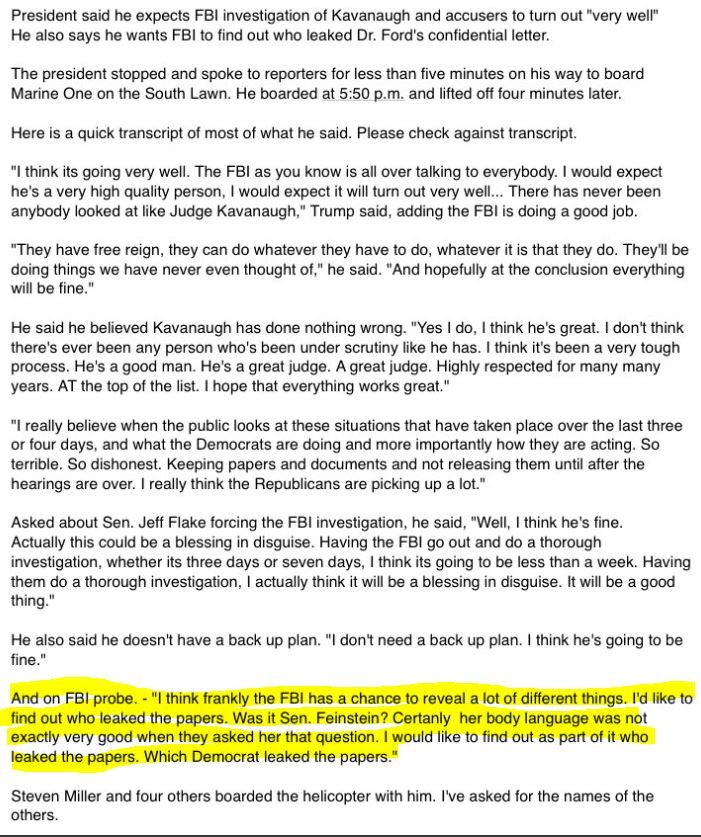 This is the exchange during the hearings to which Trump appears to be referring:

yeah I’m sure the FBI is all over that leak and while they are at it they will do an intensive background check on Dr. Ford and cross checking that with her letters and testimony

The FBI is sessions.

Look to that rat.

Yeah I’m sure they’ll be ALL OVER investigating that and the CRIMINAL doxxing of Republican Senators that came out of Maxine Water’s office.

This FBI BS is just the next clown car in a long circus.

How is leaking the letter, which might have been scurrilous, criminal? It’s not classified material, there’s no national security element involved. It’s a nice overreach by President Trump, and it certainly makes his point, but the FBI, the last time I checked, investigates crimes or tries to keep candidates from being elected or serving once they’re in office, but it’s charter doesn’t involve investigate leaks of non-classified material.

Correction: “its charter” without the apostrophe. I hope this was the result of spellcheck, not pilot error.

And “investigating leaks,” not investigate. Not on my game. This comment section needs an editing function.

Dr. Ford under oath said she wanted to remain “anonymous” but despite that it got leaked

Feinstein would later claim she did not leak the letter herself

lastly the FBI was passed this letter after the hearings, media frenzy and democrat delays, and **boom** here we are now

so the possibilities are:

perjury from Dr. Ford in who leaked the letter

bad behavior on Feinstein’s part that can get her censured

or her lawyers could be guilty (or atleast indicted) for malpractice

any others I’m missing?

Malpractice isn’t a crime. It’s a tort in the family of negligence. There can also be a breach of fiduciary duty which sounds in equity, not law.

In either case, the matter is in the hands of the plaintiff, not LE.

Because of the specific nature of the document in question, how it was received, how it was handled, and that it related to a confidential process regarding Judicial Nominations, it might be covered by specific laws regarding disclosure.

Full disclosure: I spent a summer working for Congressman Charlie Norwood of Georgia 20 years ago. I remember that there WERE rules about specific document handling that I was instructed on, and that SOME of them had a criminal component to them, but I’m now fuzzy on what they were.

I must have misread the thread in answering.

I thought this portion was a discussion on if the leaking of the documents might be a criminal act subject to prosecution, which would make it subject to Law Enforcement investigation.

BTW, that is another question I have, “who was her beach friends?”

As a technicality, it actually is considered “confidential” information of the Congress of the United States while it is in committee.

Releasing documents have been deemed “committee confidential” is what Sen. Cory “Spartacus” Booker tried to grand-stand about.

A Senator doing it is probably immune to prosecution due to the “debate” clause (but not expulsion by the Senate as a whole). A STAFFER likely has no such immunity, and could at least in theory be prosecuted for releasing a non-public document of the Congress.

If the leak came from the Judiciary staff members, it quite likely does constitute at least a Federal Misdemeanor, but more likely a Federal Felony due to the requirements of the committee to safeguard information.

Certainly it would be grounds for being fired by the Committee.

It would likely also open the individual up to personal tortious liability, as the leak is certainly outside the scope of their duties in the performance of their job.

I’m no attorney, and yet I know that monkeying around with the Senate investigation is a felony that carries a 5 year prison sentence. While I was never a big fan of DJT’s intelligence, he seems to be smarter than most. Most every time someone says he is wrong, DJT is right.

In case it slipped by you, an FBI background investigation is not a criminal investigation. It is simply meant to provide information. Who leaked the contents of the letter is relevant because it goes to the heart of credibility. Based upon the evidence we have in front of us, what we already know, it is simply beyond belief that Christine Blasey-Ford actually wanted the anonymity she pretends to have craved. It’s clear that she intended to go public all along.

Well, as long as we as the FBI is investigating non crimes, we might as well look bbn into this one too…

Initial thought is this is Trump showing the dems just how stupid the FBI investigation request is at this point.

I enjoy seeing Trump having a little fun.

A businessman like Trump knows: every one of these nodes is an opportunity to gain on your opponent. Want an FBI investigation? Okay, I wonder what else they can find while they’re at it!

The latest, the judge has advanced Senators Malarkey lawsuit to stop the SCOTUS vote.

I’m not even a lawyer and even I know the courts have no authority to tell the Congress how to carry out ITS INTERNAL PROCEEDINGS. Proceedings, I remind you, that are mentioned directly in the Constitution.

I missed the addendum that says “…unless a lower court disagrees.”

And get that co-conspirator sessions the fu-k out of the justice dept before we loose our country!!

Rep Eschoo leaked the letter. Of course, she coordinated with Feinstein, but she or her staff were the ones who did it. That gave Feinstein plausible deniability.

Maybe I’m getting too old for this sh*t, but I’m unimpressed with all the dumba$$es upon the stage, on both sides of the aisle. Most are definitely second or third stringers in life with first string monetary connections. W.F. Buckley’s phone book comment is making greater sense in light of this spectacle that’s been occurring. 🙂

Well, she denied leaking it in a statement to congress, I’ve heard that lying to Congress is a crime. Investigate.

Actually, Feinstein admitted to leaking in her opening statement during the Kavanaugh hearing.

Feinstein: “And I held it confidential, up to a point where the witness was willing to come forward.”

Ford: “By the time of the confirmation hearings, I had resigned myself to remaining quiet and letting the committee and the Senate make their decision without knowing what Mr. Kavanaugh had done to me.

Once the press started reporting on the existence of the letter I had sent to Senator Feinstein, I faced mounting pressure. Reporters appeared at my home and at my workplace, demanding information about the letter…”

So, according to Ford, she only went public AFTER the reporters were asking about the letter. Yet Feinstein said in her opening statement that she held it confidential until Ford was “willing” to come out. Transcript of hearing: https://www.washingtonpost.com/news/national/wp/2018/09/27/kavanaugh-hearing-transcript/

Feinstein’s own words show she broke the confidentiality at a point she believed Ford wanted to come forward.

I can’t find it but I heard Dick Durbin bitching about “Feinstein did not leak the letter” on the radio. It really sounded like it was a sore spot for those losers. They need to get the salt out on that one and start rubbing.

Feinstein is the one that leaked it. Unless she can produce evidence to clear herself

My bet is Katz. She is a social justice lawyer. They make a fortune in the sexual harrassment industry. Fake victims getting large ‘go away settlements’ from corporations with liability insurance. The accused does not have a say in the defense, nor does the corporation. The insurance company lawyer is in charge. They look at it from the bottom line of cost analysis. Not whether or not the claim is legit. Sweathognik appears to be a professional victim.

that is who my money is on too

It’s telling that she knew she was going to be accused of leaking the letter and had a carefully prepared response to read. The response was likely drafted by Ford’s attorneys so that it didn’t incriminate either of them. Everything is carefully crafted by these Dem operatives disguised as attorneys.

Is this why Trump agreed to the delay? To investigate the suspect and possibly illegal processes supporting the Democrats’ warlock hunt?