“We will will have an immense influence over what happens in Sweden in the coming weeks, months, years,” says Sweden Democrats’ leader 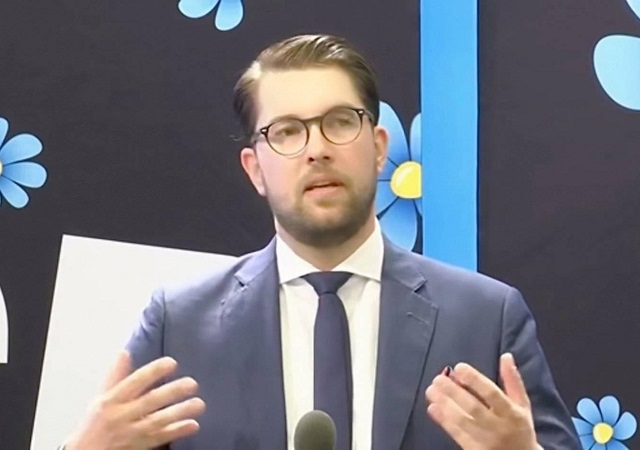 Sweden faces political impasse after ruling left-wing coalition and the opposition center-right alliance failed to win a clear majority in Sunday’s election. The biggest winner of the night was the nationalist party, the Swedish Democrats, who won 18 percent of the vote, compared to 12 percent in the 2014 elections.

“We see that we are this election’s winner, but now we enter a new mandate period and now we are going to get influence over Swedish politics for real,” Jimmie Akesson, the leader of the Sweden Democrats, told supporters Sunday night. “We strengthen our kingmaker role. We will will have an immense influence over what happens in Sweden in the coming weeks, months, years,” he added.

The ruling Social Democrats, Greens, and Left Party coalition won 40.6 percent of the vote and the opposition center-right alliance secured 40.3 percent, giving them 144 and 142 seats in the 349-seat parliament respectively. The Sweden Democrats are poised to take 63 seats.

With 28 percent of the vote, Prime Minister Stefan Löfven’s Social Democrats suffered their worst defeat in more than a century. Despite the dismal performance, Löfven, staked claim to form the next government, urging to “build a cross-bloc coalition” to “avoid the growing influence of” anti-establishment Sweden Democrats, media reports suggest.

It is a dead heat between the centre-left bloc made up of the Social Democrats, the Green Party, and the Left Party with 40.6 percent and the Alliance bloc (Moderates, Center Party, Christian Democrats, and Liberals) with 40.3 percent. With almost all the votes counted, the center-left bloc would have one more member of Parliament than the centre-right.

The nationalist Sweden Democrats gained almost 5 percent more support than the last election, but were unable to beat out the conservative Moderates for the second most votes as polls ahead of the election had predicted. Jimmie Åkesson, party leader of the Sweden Democrats, was pleased with the result nevertheless.

“I am very satisfied. I have to keep myself humble. I know there are Swedish Democrats who had hoped for more,” he told news agency TT. “But now, we are a large party and we are ready to take on responsibility and prevent political chaos.”

The ground gained by the right-wing ‘populist’ Sweden Democrats is part of the wider trend across Europe. According to latest German polls, the anti-establishment Alternative für Deutschland (AfD) is now the biggest party in eastern Germany, beating Chancellor Angela Merkel’s Christian Democrats for the first time. Nationwide, the AfD is now the country’s second-largest force in the opinion polls.

There are early indications that mainstream parties could come together to form a broad coalition, with the sole purpose of keeping Sweden Democrats from dictating their anti-EU and anti-mass immigration policies to the next government. The opposition center-right bloc has already rejected “any idea of an alliance” with the right-wing party ,” German broadcaster Deutsche Welle reported. After lengthy negotiations, the country expects to see a left-right grand coalition, similar to the one led by Chancellor Angela Merkel in Germany.

The progress of anti-nativism is a concern here, there, everywhere.

Europe may be coming to its senses, but it’s likely too late for Sweden. The US isn’t much better. You cannot improve your country by importing millions of uneducated, unskilled, low-IQ people who don’t wish to assimilate.

I’m told Sweden as a country has such nice neighbors.

notamemberofanyorganizedpolicital in reply to Whitewall. | September 11, 2018 at 2:17 pm

That’s because Norway and Finland have guns…….

After a week of hype over the weekend voting in Sweden, I had to actually search for the results. My conclusion was easy. The media was attempting to ignore, and then mitigate the disaster dealt out to the lefty, pro-jihadist EU.

To the non-jihadists in Sweden and the EU: More power to you!

18% isn’t enough to be in the driver’s seat. All other splinter factions would rather compromise than give power to the controlled immigration people.

A coalition of the center-Left and center-right parties in Sweden would easily marginalize any power the Sweden Democrats might have.

We are holding our breath to see who is going to form a government. Neither the Röd-gröna röran(Red/Green mess) nor the Alliansen (Alliance) have the 175 votes needed to form a government. Neither the Alliance nor the Red/Green nor any of the individual eight parties will work in cooperation with the Sweden Democrats. We saw this last time around with the “December Agreement” (Decemberöverenskommelsen) which you can read in the links below. That formalized December agreement was so convoluted and so twisted that they decided to call it off because they did not want it going down in the history books like that. What they did instead was worse, they froze the Sweden Democrats out behind closed doors. Something similar is going to happen this time and in no way the bedfellows or their backroom agreements will be good for Sweden. Just as an aside at the final debate on Friday the PM was speaking to the Moderate Party leader and their was the PM saying that he feels that he is no longer bound by any of the things we agreed to previously regarding the sharing of government. This was on national TV. The other thing that I read in a Swedish or Danish news paper what we know already about the undemocratic elections we have and while looking for it I see that Breitbart has the gist in English.

I am not disappointed, nor surprised by the election. Nothing good was going to happen here. I actually thought SD would have a better showing and I had hoped that the new AfS Alternative for Sweden Party would make a showing and reach the 4% to have a mandate in govt. AfS BTW: is the SD youth group that was kicked out because they were sticking to their guns and not bending over backwards like the SD ‘Adults’. In my scenario with SD having 25-30% the problem of forming a government would be much worse.

The only ideas I have right now is taking out my woodworking tools and make pitchforks and torches to sell in the town square. If there is a light to be seen in this dark tunnel I know for sure that it will be a runaway freight train closing fast.

Good luck to you. Hopefully the rest of the Swedes will come to their senses in time to avoid the national disaster they seem to be intent on confronting.

Don’t be discouraged. It is obvious from observation that you guys don’t have a secret ballot. Socialists everywhere HATE secret ballots. They know if people were to vote their conscience and never tell a soul, they would be done. DONE! Demand that the ballot be secret. This is a hill worth dying for. Aim for it!

The secret ballot IS a human right.

Yes, build your pitchforks, export them there, and don’t forget to place the “MADE IN USA” seal on it.

Good luck to y’all. You can count on us.

Neither the Left or the Right will form a government with the SD, I expect.

Its sortof like here: The establishment RINO’s would prefer to work with the Democrats than with Trump’s Populists.

This won’t be the first country in Europe to make a similar deal to exclude the upstart Nationalists.

Anything to preserve the status quo.