Anti-EU party tipped to become kingmaker in the next coalition 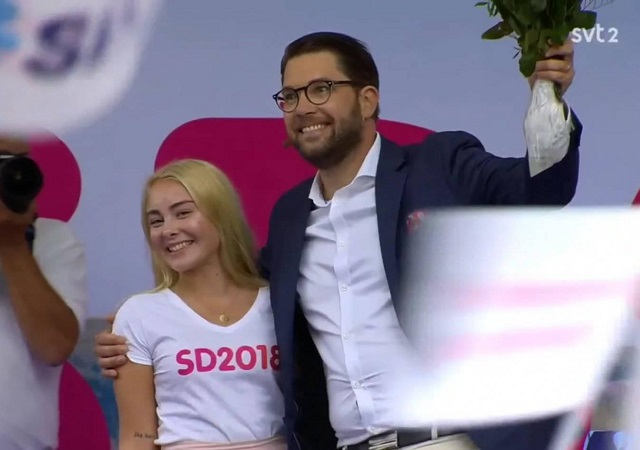 The right-wing Sweden Democrats (SD) are surging in polls ahead of the Swedish general election on Sunday. The final YouGov poll suggests the party will win nearly 25 percent of the vote becoming the largest party in parliament, beating the ruling Social Democrats (SAP). So far, most polls show Sweden Democrats emerging as the second largest party.

Formed in 1988 as a Far-Right party, the Sweden Democrats have reinvented themselves under the leadership of Jimmie Akesson. The party entered the parliament in 2010, breaking the five-percent barrier for the first time. In the 2014 general election, the party received close to 12 percent of the vote. The European migrant crisis that began exactly three years ago in the autumn of 2015 catapulted the party to the center stage.

Despite varying poll numbers, the Sweden Democrats are likely to emerge as kingmakers after the weekend’s vote. As British newspaper The Independent explained:

Neither of Sweden’s main political blocs is likely to win a majority in an election on Sunday, giving the far-right Sweden Democrats a key role in shaping the next government. (…)

The Sweden Democrats have been clear they want influence over policy, particularly on immigration, in return for support.

“We are prepared to bring down any government we think is not leading Sweden in the right direction,” Sweden Democrats leader Jimmie Akesson told Reuters in a July interview.

Even the left-wing British daily The Guardian ruefully admitted that “[n]o government can be formed without [Sweden Democratic party’s] cooperation unless other parties combined across their traditional blocs to form one whose main point is that it opposes the SD.” Attributing the party’s success to a “simple message of ethno-nationalist nostalgia,” the newspaper admitted that “[e]ven on the most pessimistic forecasts, four out of five Swedes will vote against the SD.”

A scenario where rival political blocs come together to keep Sweden Democrats away from power would be unprecedented in the country’s history, but in recent years Europe has seen bizarre coalitions forged by the establishment parties to keep their right-wing opponents out of office. In the 2017 French presidential election, conservative Republican Party and ruling Socialist Party bowed out of the race in favor of the wild-card candidate Emmanuel Macron. In Germany, the rise of the right-wing Alternative for Germany (AfD) forced the arch-rivals, Merkel-led Christian Democratic bloc and Social Democrats, to enter a coalition. In the 2016 UK referendum, both the Conservative and Labour Parties officially backed the pro-EU stay campaign.

Sweden Democrats’ clout over a future governing coalition should set off alarm bells in Brussels. Ahead of the election, Akesson has renewed the party’s anti-EU stance. “We should renegotiate the terms of our membership of the EU and then the people should have their say,” Jimmie Akesson said. “Sweden election to spell nightmare for EU as anti-Brussels party set to be kingmaker,” the UK newspaper The Express predicted.

Sweden, a country of 10 million people, has taken 600,000 immigrants in past five years alone. With the country’s growing migrant population, predominantly from the Middle East and North African, Muslim immigrants have become a major voting bloc for the left-wing parties. In the run-up to the election, the Sweden Democrats accused Social Democrat candidates of carrying out a smear campaign against the party aimed at influencing Arabic and Somali speaking voters. Sweden’s public broadcaster Sveriges Radio reported:

Several Social Democrat candidates in local elections have been caught spreading misinformation online about their political rivals in Arabic and Somali.

Candidates for local elections in places like Örebro and Jönköping counties have posted false or misleading information about the center-right Moderates and the anti-immigration Sweden Democrats.

For example, in Örebro county, a Social Democrat candidate wrote online in Somali that if the four-party coalition known as the Alliance won September’s vote, it would cooperate with the Sweden Democrats and stop taking in refugees, close all mosques and convert Muslim children.

In Jönköping, newspaper Expressen reported, a candidate posted a warning on Facebook telling Muslims or voters with an Arab background not to support the Sweden Democrats or the Moderates.

Growing support for the nationalist and anti-mass immigration parties is part of a wider European trend. As Wall Street Journal suggested Wednesday: “Voters head to the polls for a national election on Sunday, and as in nearly every other recent European election the polls suggest that Swedes are set to rebel against mainstream parties, especially on immigration.”

The latest opinion polls project the Alternative for Germany (AfD) emerging as the second largest party in the country for the first time. Last week, Ireland saw the launch of a UKIP-style Irexit Freedom party, reviving the campaign for Ireland to leave the European Union. Anti-EU and anti-mass immigration parties have secure electoral victories in Italy, Austria, and most of the eastern European countries. In previous elections, Marine Le Pen’s Front National in France and Geert Wilders’ Dutch Freedom Party (PVV) posed a serious challenge to the establishment parties in their respective countries.

With anti-establishment and nationalist movements gaining momentum across Europe, the political elite in Brussels is set to face an uphill battle in the upcoming EU parliamentary elections scheduled for May 2019.

Much more than the proverbial camel’s nose is already in the tent. With the large numbers of “refugees” Mutti Merkel, other Euro-Elites and Brussels apparatchiki have foisted on ethnic Europeans, the die is pretty well cast for birthrate takeover of European countries.

The wife and I will be voting Sunday for the Sweden Democrats and I will also be voting in November via Vermont absentee ballot for the US mid-terms.

If anyone wants to watch a movie length Swedish documentary with English Subtitles on the socialist, eugenicist history of the ruling elitist Social Democrat Party it is here:
(The Social Democrats have a lot of nerve calling anyone else Racist or NAZI)

I found setting the subtitle font and background opacity to 100% made for easier viewing.

One people, One Party – The history about the Swedish Social Democratic Party

Good luck to you. Hopefully your fellow Swedes come to their senses and do the same.

I watched the documentary.

The film deals mainly with the Swedish SD era 1904-1950. SD intelligentsia and politicians wrote about, and mouthed, anti-capitalist leftist-nationalist syndicalism. Lots atheist pseudo science like phrenology and fascist biology.They embraced eugenics, especially sterilization of the feeble-minded (negro and retarded white people) viz American Margaret Higgins Sanger. During the war SD were Vichy writ small. More than just passive collaborators. They aided and abetted NAZI roundups of Jews and other undesirables – among other things.

Although Swedes are very much reserved and introverted, in fact in general they will not have an opinion on immigration/migration, at least in conversation as individuals or within small groups, they will vote with their feet. At one time perhaps they were under the illusion that this immigration/migration from the east was ok, largely because they assumed the best and were not informed of the consequences, but now I am sure that they will do whatever is needed to protect their culture. I will add that Swedish culture is very different from US culture, and also the UK culture in which I was raised.

I have American Flag that I brought from back home but will not fly it because I am in Sweden. All over Sweden flags are being taken down because the Swedish Flag is Racist. In my more than a dozen years here I have not seen a hint large scale Swedish patriotism. Outside of Eurovision and Football I can see none of it we have had years of people saying Sweden and Europeans have no culture. Glad you had good experiences in Stockholm. I do not get up there to spend any time just pass through.

The polls open in two hours and absent a miracle landslide for SD and AfS the government will be much worse. We are doomed.

This article uses the term “far right” multiple times, never explaining what is so “far” about the party. The technique is often used in the USA to manipulate readers. I rarely read about “far left” parties or people. I think that Sweden’s problem is “far left” parties have been in dominance.

I hope you and your family are OK.

There are a few other reports on the Web from there that I have read or seen: you can feel, smell the anxiety. It’s evident they KNOW they are about to lose their country. They KNOW they need to do something about all of it. I fear one parliamentary election will not be enough. The Socialists have screwed everything for the people, down to their freedom of conscience and even their health care options. The government’s military drills in the event of an invasion (which they seem to think is coming from Russia) should not be fooling the people.

The Swedes better find their inner Minutemen – and soon, or they will be screwed.

Best of luck to you and yours.

(Full disclosure: my husband’s great-grandmother was the daughter of Swedish immigrants who arrived here over a century ago. I’ve been doing some research on the country as I build my husband’s family tree.)

The political left will band together to use every dirty trick in the book to prevent the right from taking power. They’ve done the same thing in every other European election to date, so I don’t see why Sweden should be different.

Too little, too late. And why are they letting these imported Muzzie scum vote? Suicidal.

Maybe there is a bit of the Viking DNA still left in old Sweden. While the Vikings might of raped and pillaged others, they did not allow their daughters and wives to be rapped. And they sure as hell did not invite the rapers in and then cloth, feed and house them.

The citizens of the “Colonies” in America were pushed to action by the king of England and the undemocratic demands he made. The elite in Sweden and now in the US is doing the same thing through the msm and the elite of academia and Hollywood. They control most of the public information outlets and think by their actions that they are in the right. Just like our forefathers we will reach our breaking point and have a tea party like no one has ever seen. In one eight-year term, the odious obama tried to change the culture of our country to one of elite multiculturalism and anti-religion (except islam). Gays became the top of societal norms. Transgenders must be allowed to do anything they wish simply because they wish it. Our military must allow them in and PAY for their sex change operations. Nuns must pay for contraception for their employees. I’m not religious but obama tried in one term to tell us that we have been wrong for over 200 years! Our breaking point is approaching.

They won’t be part of the ruling coalition. They’ll be locked out by everybody else, just as Geert Wilder’s PVV was in the last Dutch election.

Just for the record.
The YouGov poll is about a week old. All the ten more recent polls show a significant drop in support for the Sweden Democrats. The most recent poll puts them in third place on 16.9%

Why should a country surrender its culture and lifestyle because immigrants don’t want to assimilate?

Because, gosh darn it, they are just so much smarter and better and more tolerant and more virtuous than you. That’s why.