“What I want to say to the government is: you can put us in jail, but do not close the eyes and ears of the people.” 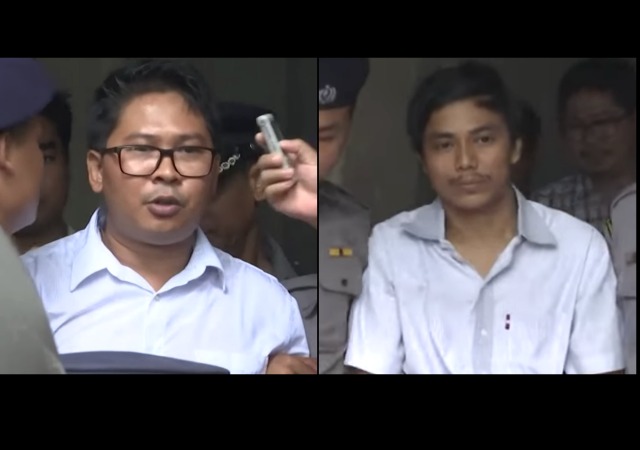 A Myanmar court sentenced two Reuters journalists, Wa Lone and Kyaw Soe Oo, for seven years after they exposed the human rights abuses by the Myanmar military on the Rohingya minority in the Rakhine state.

The judge claimed the two men “collected and obtained confidential documents.” Prosecutors insisted that the men had “intended to harm the state by obtaining secret documents for Reuters’ commercial benefit, which clashed with Myanmar’s national interest.”

“The defendants … have breached Official Secrets Act section 3.1.c, and are sentenced to seven years,” the judge said, adding that the time served since they were detained on Dec. 12 would be taken into account. The defense can appeal the decision to a regional court and then the supreme court.

The verdict comes amid mounting pressure on the government of Nobel laureate Aung San Suu Kyi over a security crackdown sparked by attacks by Rohingya Muslim insurgents on security forces in Rakhine State in west Myanmar in August 2017.

More than 700,000 stateless Rohingya Muslims have fled into Bangladesh since then, according to U.N. agencies.

Wa Lone declared that the two men know “they did nothing wrong” and he has “no fear” and still believes “in justice, democracy and freedom.”

Kyawq Soe Oo said: “What I want to say to the government is: you can put us in jail, but do not close the eyes and ears of the people.”

Wa Lone and Kyaw Soe Oo investigated a massacre that took place in the Inn Din village that killed 10 Rohingya men and boys. From The Wall Street Journal:

Their photos of the victims, who were tied together before being executed, prompted a rare admission of wrongdoing by Myanmar’s military, which has otherwise rejected claims that it violated human rights in what it calls an antiterrorism campaign.

Their ordeal began on Dec. 12, when police officials invited them for dinner at a restaurant in suburban Yangon. During their trial, the reporters told the court that Police Lance Cpl. Naing Lin and another officer handed them documents that were rolled up inside a newspaper, and that they were arrested as they left.

During the trial, Police Capt. Moe Yan Naing testified that a police general had given instructions to entrap the reporters. Lance Cpl. Naing Lin acknowledged meeting the reporters but denied giving them anything.

After they were arrested, the reporters were handcuffed, black hoods were placed over their heads and they were transferred to a site in northern Yangon. There they were kept handcuffed and prevented from sleeping during a marathon interrogation session that lasted several days, Mr. Kyaw Soe Oo said.

Kyaw Soe Oo claims that “interrogators ignored the documents that he and Mr. Wa Lone had been accused of obtaining and focused instead on their reporting.” Questioning finally came to an end after the authorities found the photos of those 10 males on their phones. That’s when “one of the officers barged into his cell and asked, ‘Why didn’t you tell us about this?'”

Reuters reported that a “police witness testified the restaurant meeting was a set-up to entrap the journalists to block or punish them for their reporting of a mass killing of Rohingya Muslims in Rakhine.”

I’ve been trying to document the genocide of the Rohingya people in Myanmar as officials have tried to deny what they’re doing and human rights darling Aung San Suu Kyi remains as silent as she can.

“Our findings are grim,” panel chairman Marzuki Darusman told a news conference on Monday. “We believe that establishing the facts is the first stepping stone towards change.”Contacted by phone, Myanmar military spokesman Major General Tun Tun Nyi said he could not immediately comment. Zaw Htay, spokesman for Suu Kyi’s government, could not immediately be reached for comment. Reuters was also unable to contact the six generals named in the report. The Myanmar government was sent an advance copy of the U.N. report in line with standard practice.

The reports includes Brigadier-General Aung Aung, who commands the 33rd Light Infantry Division. That division “oversaw operations in the coastal village of Inn Din where 10 Rohingya captive boys and men were killed,” the massacre the two Reuters journalists investigated.

The UN described the military’s action on the Rohingya minority as “grossly disproportionate to actual security threats.” The panel said the crimes that took place “and the manner in which they were perpetrated, are similar in nature, gravity and scope to those that have allowed genocidal intent to be established in other contexts.”

The United Nations defines genocide as acts meant to destroy a national, ethnic, racial or religious group in whole or in part. Such a designation is rare, but has been used in countries including Bosnia, Rwanda and Sudan.

“The scale, brutality and systematic nature of rape and (sexual) violence indicate that they are part of deliberate strategy to intimidate, terrorize or punish the civilian population. They are used as a tactic of war,” she said.

Rohingya have faced decades of oppression in Myanmar and when it was called Burma.

The presumption is these reporters just got the tip of an iceberg, why else send out this chill for anyone else daring to report there?
Perhaps CNN’s Jim Acosta should pick up where these guys left off, just to get some perspective on who is really putting themselves on the line to report on abuses of power.

Who are the Rohingya and why is the military involved with them?

“…security crackdown sparked by attacks by Rohingya Muslim insurgents on security forces in Rakhine State in west Myanmar in August 2017.”

Muslims migrate into a new area, and when there are enough of them, they start murdering the inhabitants. If the government responds, it’s always a “massacre.”

News to me, a twenty year Navy vet, that we were involved with a Muslim insurgency in Myanmar. Please, elaborate.

Sorry, I apparently misunderstood what you were saying.

Reality is often unpleasant. I wish everyone were mature adults who wished to discuss problems in a constructive fashion to reach a consensus on the truth, but many people have no desire to do that.

Instead, they use discussions and “news” as bludgeons to push a political fantasy, then shame anyone who dares disagree.

The Rohingya are “problematic.” If they refuse to give up their violent Muslim ways, what can a host country do except persecute them and ultimately expel or destroy them?

The UN described the military’s action on the Rohingya minority as “grossly disproportionate to actual security threats.”

Well, they would, wouldn’t they?

At least the UN is admitting that hostile Muslims are a security threat. Now they’re just quibbling over what should be done about it.

Yes, except there’s no quibbling at the UN over “what to do” about the Rohingya – their solution is simple: Let them conquer the country, and kill as many as necessary in the process. Then, force the rest to convert, pay the Jizya, or die. Oh, and those paying the Jizya? They’ll be killed too, bit by bit.

What we don’t need is a replay of the late 90’s when we made Kosovo safe for worthless Muzzie Albanian terrorists and criminals by coming down hard on the Serbs who were finally doing something about it.
Let Burma be Burma. We’ve got no business there.

The Rohingya are Muzzie invaders and terrorists who are finally getting some pushback from the government. Sorry, but I’m all out of Shits to Give.

It will always be Burma to me.

Harvard write up on Rohingya

The world didn’t care when the Muslims wiped out the Buddhists for a thousand years. The genocide in what was then in what is now Afghanistan. The mass murder of monks at ancient learning centers like Nalanda:

“…The powerful 7th-century ruler of Kanauj (Kannauj), Harshavardhana, is reported to have contributed to them. During his reign the Chinese pilgrim Xuanzang stayed at Nalanda for some time and left a clear account of the subjects studied there and of the general features of the community. Yijing, another Chinese pilgrim a generation later, also provided a minute account of the life of the monks. Nalanda continued to flourish as a centre of learning under the Pala dynasty (8th–12th centuries), and it became a centre of religious sculpture in stone and bronze. Nalanda was probably sacked during Muslim raids in Bihar (c. 1200) and never recovered…”

Probably? F*** all that stupidity; we have Indian accounts of Islamic muderousness. Muslim generals used to compete, used to brag, about how many mountains of decapitated hindu heads the could accumulate.

And I’m supposed to side with the Muslims against the Buddhists?

The world didn’t care that the Buddhists who carved those statues out of stone were living and breathing human beings who had been forced out. They just cared about the statuary. F*** that, I’ll side with the Buddhists every time, wherever the Benghali invaders chase them.

Same thing happens to this day in every country with a Muslim majority – or even a large minority.

This is not to say that individual people who refer to themseles as Rohingya have not been victims of crimes.

Remember, a moderate Muzzie is the one cheering on the sidelines as an observant Muzzie chops your head off.