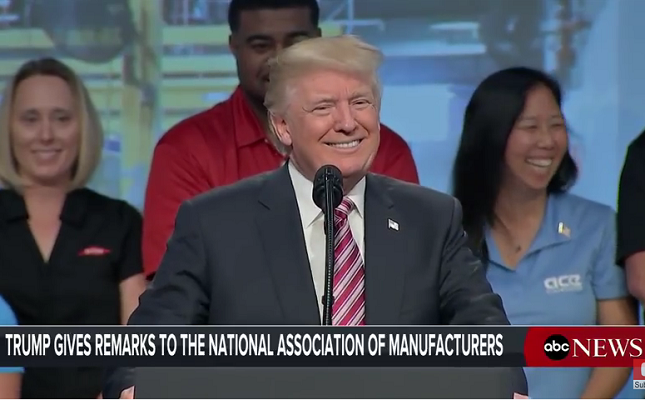 While everyone is focusing on anti-Trump derangement, the blue-collar job sector has been quietly bouncing back.  According to the Brookings Institution, blue-collar job growth is at its highest level since 1984.

Blue-collar jobs are growing at their fastest rate in more than 30 years, helping fuel a hiring boom in many small towns and rural areas that are strong supporters of President Trump ahead of November’s mid-term elections.

Jobs in goods-producing industries — mining, construction, and manufacturing — grew 3.3 percent in the year preceding July, the best rate since 1984, according to a Washington Post analysis.

Blue collar jobs, long a small and shrinking part of the U.S. economy, are now growing at a faster clip than those in America’s much larger service economy. Many factors collided to produce the blue collar boom. Some are tied to short-term boom-and-bust cycles, but others may endure.

The rapid hiring in blue collar sectors is delivering benefits to areas that turned out heavily for Trump in the 2016 election, according to the Brookings Institution, a shift from earlier in this expansion, when large and mid-sized cities enjoyed most of the gains.

The biggest drivers of the blue-collar hiring surge are the rebound in oil prices, the need to rebuild after disasters such as Hurricanes Irma and Harvey, and rising demand generated by a growing economy.

Not only is there current growth in this sector, but it appears that more is soon to come to small towns and rural areas.

Rural employment grew at an annualized rate of 5.1 percent in the first quarter. Smaller metro areas grew 5.0 percent. That’s significantly larger than the 4.1 percent growth seen in large urban areas that recovered earlier from the Great Recession, according to an analysis by the Brookings Institution’s Metropolitan Policy Program of a separate set of Labor Department data released on Wednesday.

. . . .  In a sign of revitalization in an area previously hit hard by the decline of coal and steel production, the Appalachian town of Ashland, Ky., recently broke ground on a new aluminum mill. Owned by Braidy Industries, the mill will eventually employ over 500 people.

Hiring has already started for construction positions, and the local community college is training people for the high-tech manufacturing jobs.

“I had 24 cities and towns bid for this project. Ashland was by far the poorest of them all,” said Craig Bouchard, the chief executive of Braidy Industries. “I chose Appalachia for one reason: They have eight time more available metal-working families than any other place in the country. I’ve already got 7,000 job applications.”

The Brookings Institution has details:

The central dynamic of the Trump period persists. As Table 1 shows, goods-producing industries have been surging while services industries have seen their seasonally adjusted employment growth slow since 2016. 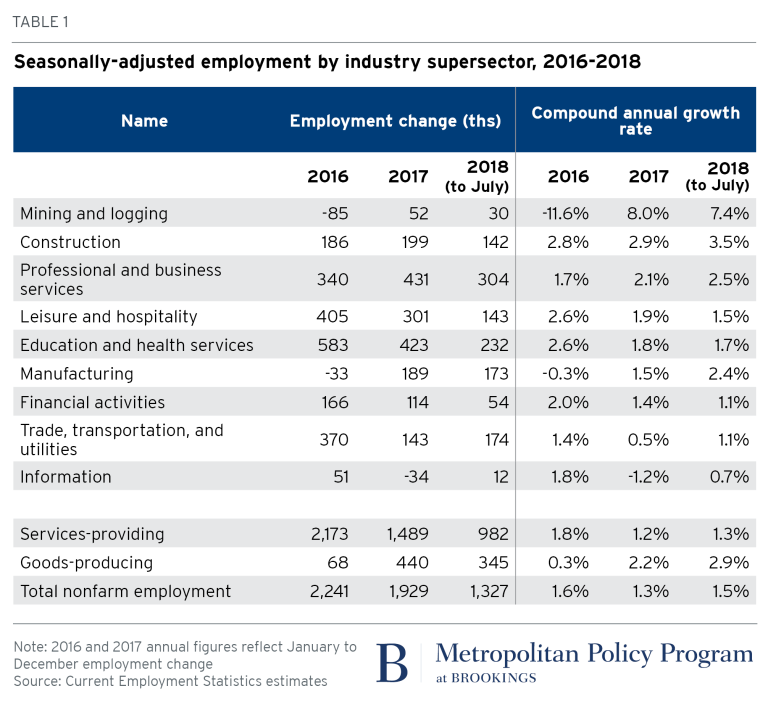 To be more specific, while information-sector growth has turned negative in the last two years (with a slight recovery starting in 2018), resource extraction and manufacturing industries have been growing at their fastest rates since the financial crisis.

Mining and logging pursuits (which include oil and gas extraction) have seen rapid employment growth based on strong hiring in the various support activities associated with the sector like exploration and prospecting. Meanwhile, machinery manufacturing; electrical equipment, appliance, and component manufacturing; and fabricated metal product manufacturing have all been growing smartly as domestic demand has kept factories humming.

This record optimism is no accident. It is fueled by the game-changing tax reform passed six months ago. Last year, manufacturers promised that we would deliver for our people and our communities if tax reform became law. Congress and the president delivered, and now manufacturers are keeping our promise: hiring new workers, raising wages, improving benefits, buying equipment and expanding right here in the United States.

And the best part is, with manufacturers’ record-setting confidence and plans to keep hiring and growing, more good news is yet to come.

Watch President Trump’s 2017 remarks to the National Association of Manufacturers:

And Odumbo gets not credit?

After all, he isn’t he the serena williams of men’s tennis?

JackRussellTerrierist in reply to TheFineReport.com. | September 10, 2018 at 1:05 am

Obastard: “Those jobs are never coming back.”

If we’re going to do sports analogies, I think Obama would be closer to Tonya Harding, especially if you look at what happened to people he was campaigning against.

It’s this type of news that goes under reported and hence, tamps down enthusiasm for our side. I remember just a few short years ago that any good Econ news was being shouted from the mountaintops over and over again from the usual media suspects. It’s frustrating, but I have accepted it as an almost unchangeable evil. My hope is that the regular people that benefit from this continued economic lift show up to the polls to keep it going and to prevent the other side from slowing it down.

It’s underreported because the Democrats’s allies in the press (but I repeat myself) know that Trump will rightly be credited for the good economic times. They’re doing everything not to report on it, not talk about it. They have an instinctual fear in their lizard brains of another Republican Morning in America campaign turning the map almost completely Republican in 2020.

Ahem, as I said, repeatedly, Trump will be the most conservative president in the last 50 years.

You’re looking at the tip of the iceberg. Growth creates growth. Stop the unfair trade deals, get rid of excessive government regulation, and lower taxes. See what happens.

McCain has risen from the grave in time for Halloween:

Ben Sasse Has Considered Leaving the GOP to Support the GOP:
http://nymag.com/daily/intelligencer/2018/09/ben-sasse-has-considered-leaving-the-gop-to-support-the-gop.html

Good numbers won’t mean a thing if we don’t start cleaning out Congress. Bush I immediately set about reversing Reagan’s policies and in time he was forgotten.
The perfidy of the GOP establishment must not be allowed to take root again.

Like 1984, the GOP establishment hates Trump like they hated Reagan, and for many of the same reasons: he exposes them as a bunch of over-credentialed LOSERS that the GOP and country could easily do without.
Like Reagan, they are doing everything they can to sabotage his agenda, only a bit more openly now.

I just drove past a trucking company that was offering a $5000 signing bonus.

I am just wondering how long it will take all the New World Order (NWO) folks to admit that their open border policies have been screwing American workers for decades?

To listen to the Rinos and the Progs they don’t seem to care about all of us that still cling to our guns and bibles.

See to it that they get what they deserve in November – get out and vote!

The democrat’s strategy is to keep a high percentage of the population dependent on the government. If the government is the main source of your needs, you will tend to vote for those advocating these socialist policies.
A growing economy and a less dependent population are not in the interest of the democratic party. A robust economy will solve many of the nation’s problems, leaving the government with less to do.

Too bad it was only these two VRWC far right sources which put this information out.