“There were no civilian injuries.” 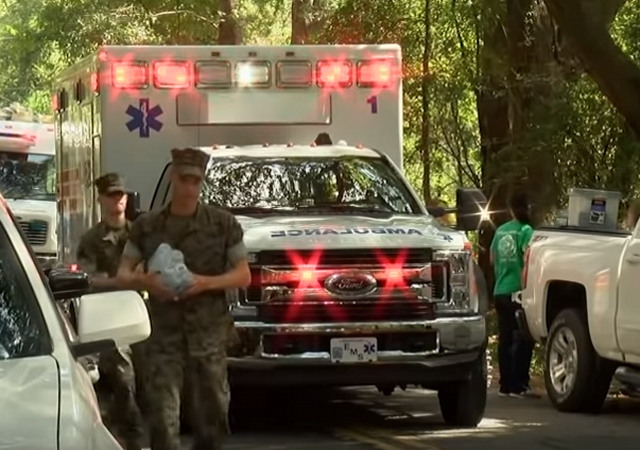 A rare incident occurred on Friday, when a U.S. Military F-35 fighter jet crashed in South Carolina. The pilot, who was the only occupant of the craft, successfully ejected before impact.

A U.S. military F-35B fighter jet crashed near the Marine Corps Air Station Beaufort in South Carolina on Friday, for reasons that are under investigation, local law officials and the U.S. military said.

The pilot, the only person aboard the craft, ejected safely and was being checked for injuries, said a Pentagon spokesman, adding that there were no other injuries.

The jet crashed just before noon local time. It was a Lockheed Martin F-35B, a short take-off/vertical landing version of the F-35, said a U.S. military official, speaking on condition of anonymity…

Neither military nor local officials immediately offered a cause for the crash. Military officials said the crash was under investigation.

Lockheed referred Reuters to the military for comment on the incident.

Here are a couple of videos from the scene, first CBS News, then the Associated Press:

According to Paul Sonne of the Washington Post, this is a first for the F-35:

The U.S. military suffered its first crash of an F-35 aircraft in the 17 year history of the high-profile fighter jet program, the same day the Pentagon announced it had struck a deal with defense contractor Lockheed Martin to drive down costs for the next batch of planes to a historical low.

The crash of the Marine Corps variant of the F-35, known as the F-35B Lightning II, occurred Friday at 11:45 a.m. outside Marine Corps Air Station Beaufort in South Carolina, according to the Marine Corps. The service did not give a suspected cause for the crash, saying the incident remained under investigation.

“The U.S. Marine pilot safely ejected from the single-seat aircraft and is currently being evaluated by medical personnel,” the Marines said in a statement. “There were no civilian injuries.”

While we’re glad the pilot is safe, this wasn’t like wrecking a used Hyundai. This F-35 plane had a $100 million dollar price tag. Oops?

The author should have pointed out the handful of working F-35 aircraft have spent almost all of those 17 years sitting on the ground.

The Air Force made all of the same mistakes with this design as they did with the F-111 under McNamara a couple aircraft generations ago. Too heavy, too many missions for one airframe, it does many things adequately but does nothing particularly well, and it is slow.

Well, it remains to be seen how the plane holds up, but absolutely, those planes haven’t been in the air much until very recently. That criticism is spot on, but that’s just the vestiges of my military hardware nerd youth speaking. Most people aren’t going to instantly remember that fact, I imagine.

TFX Project. The other notable screw up was no chroming the chambers of the new M-16s, switching to a cheaper powder to save a penny a round and gum up the rifles… leading to American deaths.

I am curious, does a 100 million dollar loss which is pilot error lead to the pilot being grounded? One reference indicated train a pilot cost $11 million, and another said a fighter pilot cost $6 million. I am not advocating canning a pilot, just curious.

Not necessarily. It depends on the outcome of the investigation. There may be consequences, but I’ve seen pilots royally screw up and nothing happened to them. If there are consequences it can range from refresher training to the service permanently revoking their flight status.

In the Navy we used to say that with enough bananas you can teach a monkey to fly. In reality pilots are expensive so they aren’t automatically “grounded.”

I have never served in any branch of the military. However, the rumor is that if you are at fault for a ship collision or grounding, then you will lose your command and never rise to a higher rank.

It seems like that should also be true for a pilot.

However, “at fault” may be a relative term. I can read a bathymetric chart, and I am pretty sure that I could steer a destroyer away from a cargo ship travelling on a constant bearing at 8 knots. You would have to give this particular monkey an awful lot of bananas to train me to attempt a carrier landing at night in rough seas!

Here’s a table for you.

Yes, if you put a large hole in a USN ship you will be disciplined. Especially if you kill a Sailor. Like the commander of the USS San Francisco. Life is not fair. Good man, exemplary but still he hit an uncharted sea mount. He was in command. Whine to your wife.

The skipper who was by all accounts a good man went to admiral’s mast.

I need to point out that the F-35 program had a seventeen year history that is because it was a troubled program that missed its Initial Operational Test & Evaluation (IOTE) milestone. It wasn’t until eight years ago that the Short Takeoff Vertical Landing (STOVL) F-35B variant actually made its first vertical descent after going supersonic. It wasn’t until 2010, then, that this variant demonstrated it COULD perform as advertised. Not that it would do so consistently.

The F-35 program overall has been plagued by a number of design issues, which have been exacerbated by poor engine reliability. I don’t know how things stand today, but in 2015 the goal for the F-35B was ninety hours flight time before being grounded due to engine design issues. On average they could only fly forty seven hours before it could no longer safely operate because of the engine (the A and C conventional takeoff and landing variants for the USAF and USN respectively performed even worse). I’m not much for gambling but if I had to bet the plane crashed due to design issues that they’re still working out, and most likely the investigation is going to find it was largely but not entirely due to the engine design issues.

The idiots who thought the F35 could replace numbers of f15 and f16s are still in government.

The f35 is the tiger tank of WW2. The sheer number of Patton tanks manufactured decimated them.

The research should have been in missles that work on any platform, not some ridiculous white elephant that will NEVER outfly new chi comm or russian jets.

The same losers wanted to kill the A10.

The F35 is the Jeb!/obama of fighter aircraft: all hype, and a bad idea from the get-go.

The f35 is the tiger tank of WW2. The sheer number of Patton tanks

true dat: the tanks Patton commanded against Tigers were Shermans…

the number thing holds true though. 😉

How about that!? It CAN land vertically!

and the pilot apparently walked away from it, so it counts as a “good” landing.

helluvan expensive way to run an air wing though.

If they can use the plane again it will move into the “excellent landing” category.

And who knows? The maintenance chiefs can work miracles.