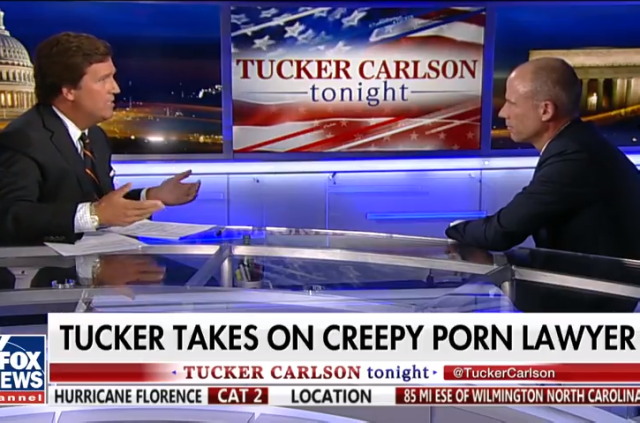 Tucker Carlson has been trying for months to get Stormy Daniels lawyer and potential 2020 Democrat candidate Michael Avenatti to appear on his show and last night it finally happened. It was an epic piece of television.

Here are some highlights from the FOX News Insider:

‘You’re Exploiting Her and You Know It’: Carlson Battles Avenatti LIVE on Set

Carlson said that Avenatti was engaging in “reckless rhetoric” and accusing Russia of “an act of war” in its alleged meddling in American elections, when Avenatti compared the allegations to posting Russian troops on its American border.

Avenatti called that accusation “ironic,” saying that it is Carlson who uses “reckless” political rhetoric.

“You’re exploiting her and you know that,” Carlson said.

Tucker delivered the knockout towards the end in this exchange:

Some people chose to focus on the chyron when the moniker came back at the end:

Odds are Avenatti will not be back on the show any time soon.

This guy is a turd, it is his MO. He is sleazy, so he definitely fits right in with the Democratic party.

I don’t think I would have been so polite with him. Then again, he has a face that my fist would love to meet. Not that I am a violent man, but he certainly pushes his crap mouth.

That was one hell of a zinger.

Is it just me or does he seem to shrink, physically shrink smaller and smaller, as the interview goes on? In the wide shots, Tucker looks like a normal-sized person, and Avenatti seems to keep shrinking.

He is so unlikable there is no way he will ever win the Dem nomination; I’m surprised they’re even humoring him at this point. He’s vile.

As low as the entire Dem party has sunk, his characteristics might just win him the nomination?

This entire interview is quite educating – it illustrates how Avenatti has only become a “national figure” because of constant slathering praise and adulation from CNN, and that only because he hates Trump as much as they do.

But less than 10 minutes with a semi-hostile interviewer and he folds like a cheap lawn chair. Oh that’s some real tough trial lawyer there.

All of these characters being thrown up by the left are paper tigers, shams and frauds, people with no skill or intelligence at all, just a willingness to strike a belligerent pose in public.

Tom, you are so right about these leftist ‘paper tigers’. A smart well grounded R can stand his ground with fact and principle for a couple of rounds and then watch the ‘paper tiger’ shrink as he runs out of ‘ammo’. The leftist is loud and proud at the start and is used to getting away with his diatribes until he is empty.

Your forgetting that Progressive Fascists have no integrity. They will lie and misinterprete your argument on purpose. Facts and logic are generally useless when talking to them.

There is a rumor going around that Stormy complains about his shrinkage problem 🙂 He does ooze slimy.

“Stand up straight with your shoulders back.”

Avenatti is an ambulance-chasing attention whore about to be disbarred by the CA bar.

Avenatti is addicted to the national attention he has been wallowing in since he stumbled into Stormy Daniels. Now that the good ship Stormy has sunk, he is desperate to stay in the news.

But Stormy is all he ever had. He doesn’t have another high profile case. So he’s out there way over his head fencing with the pros.

No one on any side cares about this fool. Everyone is hoping for him to just go away.

By the time the 2020 election comes around, it’ll be “You remember Michael Avenatti?”

Stormy Daniels will end up as the Answer to Trivial Pursuit Question. Avenatti won’t even get that.

I wonder if anyone is looking into his alleged extortion activities?

Stormy signed a Non-Disclosure Agreement. I doubt many lawyers would advise a client to break the agreement and give a 60 Minutes interview. I would think an attorney who encourages such behavior risks a malpractice suit and a tortuous interference claim from the other party.

The other party, you mean Michael Cohen? He’s not in a position to demand much of anything right now.

Got $20 that says that Stormy APPROACHED SOMEONE with her hand out (in exchange for her silence – and not that Choen went out looking for anyone DJT may (or may not) have banged 10 years ago (like we REALLY CARE).

More nothing burgers. Especially, in comparison the progress he’s making on all the things that COUNT TO REAL AMERICANS.

I will not live in a socialist/communist country…

I think CPL forfeited any moral high ground when he started calling Tucker a liar and hypocrite. He actually had an opportunity to come off as a reasonable person had he shown a bit of humility and humor rather than continually insisting that he (CPL) should be controlling the interview.

“a bit of humility and humor” = Traits that members of the Democrat-Socialist Party (Barry 0Bama, Nancy Pelosi, et.al.) aren’t exactly known for.

It would seem that these folks aren’t liking their having to live under the same Rules Of Engagement that they, themselves, have introduced to the Battle-Area.

You know, it wouldn’t take much photoshopping to morph that guys bald-headed mug into Putin.

I realize people here generally want to beat up on the guy, but my impression is that he did okay and that Carlson came off more as the assertive one.

Listened to the first three minutes, and the last minute. I didn’t want to have to take more blood pressure meds today.

Can’t wait until the mid-terms are over – then the REAL FUN BEGINS.

We are going to get to watch these guys try and OUT CRAZY EACH OTHER. Wouldn’t surprise me of one of them went completely bat$it in public and had to be put in restraints and dragged away screaming.

Wake up DEM VOTERS. If this is really what you want for OUR COUNTRY, then maybe a civil war really is inevitable.

I have no use for Tucker Carlson at all after hearing his bit on Amazon. He actively advocated Wealth Redistribution from Jeff Bezos to his employees on the argument that “he can afford it” and later “he has a moral obligation” to pay his employees more than he is currently paying them.

That, right there, made Tucker Carlson dead to me.

Yeah, that was a bit much economically.

Tucker is usually philosophically consistent, but that was not one of his better moments.

Harkened back to his stupid bowtie days.

Could it be that he was trying to force Bezos to live by the standards that Progressive Fascist demand of others?

If that was his intention, he missed. BIGLY.

If it was his intention to show hypocrisy of Bezos by showing the double standard, that would have been one thing. But he didn’t. Carlson was actually, truly believing the fact that Bezos should pay his employees more because he can afford it, and advocating wealth redistribution from Bezos to his employees because Bezos doesn’t need as much wealth as he has.

That would be hilarious.