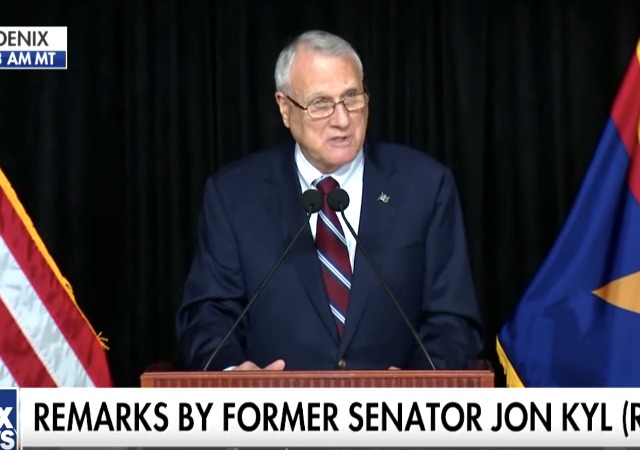 From The Arizona Republic:

Kyl, who served alongside McCain during his 18 years in the U.S. Senate, will fly to Washington, D.C., following Ducey’s announcement. He retired in 2013 after rising to become the second-highest-ranking Republican senator.

Kyl has agreed to serve at least through the end of the year, a representative for Ducey said. If he opts to step down after the end of the session, the Republican governor would be required to appoint another replacement, the aide said.

The governor, who has long called Kyl a mentor, contacted the former senator in the hours following McCain’s Aug. 25 death. The two have forged a close bond and are like-minded, pro-growth conservatives.

An aide said that Ducey has been thinking about replacements since McCain received his brain cancer diagnosis in 2017.

After McCain passed away, Ducey contacted Kyl and told him he “was the best person to take this seat.” Kyl talked to his wife and then informed Ducey he would take the spot:

“There is no one in Arizona more prepared to represent our state in the U.S. Senate than Jon Kyl,” Ducey said in a statement. “He understands how the Senate functions and will make an immediate and positive impact benefiting all Arizonans. I am deeply grateful to Senator Kyl for agreeing to succeed his friend and college of so many years.

“Every single day that Jon Kyl represents Arizona in the United States Senate is a day when our state is being well-served.”

Kyl could have his swearing in ceremony Tuesday night, but it will probably happen on Wednesday.

This means Kyl will have an opportunity to vote for Supreme Court nominee Brett Kavanaugh. Kyl served as Kavanaugh’s “sherpa” during the confirmation process, which meant that he was the nominee’s “special escort to help him meet with senators.”

I’m glad it wasn’t handed to a family member. Someone who was actually elected and not ousted by the electorate is a decent interim choice. Especially since he’s not liable to glom onto the seat indefinately.

Dynasties are antithetical to good governance.

Unfortunately, it may still go to a McCain. Kyl has only agreed to serve through the end of this year. If he chooses to step down at that time, Ducey would make another interim appointment WITHOUT the pressure of an election influencing his choice.

What I take from that is Kyl doesn’t want to serve while Trump is POTUS. You can bet he will join the resistance until then and if the Dems regain control of the House and gain a coupld of Senate seats, my bet is that he changes his mind.

I disagree with that take – more likely Kyl doesn’t want to serve at all anymore, which is why he retired from the Senate the first time. He’s only doing it because Ducey convinced him that he needed to, to get them out of a jam.

And now Ducey gets to get his own re-election bid out of the way before he has to make the real decision.

After the McCain/Kennedy/Bush amnesty bill failed in 2006, Kyl stepped in and re-introduced it so McCain could focus on running for president. Kyl was very unpopular when he retired and probably would have lost his re-election bid.

I give him credit for walking Kavanaugh through the process but let’s not forget that he is after all an open borders swamp critter of the highest order.

What? Kyl is leading the process through the Senate for President Donald Trump’s Supreme Court nominee, Brett Kavanaugh​.
That hardly sounds like a member of the resistance.

I have heard speculation about other people being the preferred post-Kyl, Post-election appointment. But that is just that – speculation. I’ll take what small wins I can get, such as a reliable Kavenaugh vote.

If I may be so blunt, as long as Kyl is there to vote for Kavanaugh, a lot of Republicans, even conservatives, will overlook a great deal else, even if it ends up being Sen. Meghan McCain voting to convict during President Trump’s eventual impeachment trial. Sabotaging a Supreme Court majority would be completely unforgivable to far too many in the party.

I’m not writing this as a fan of Sen. Meghan McCain, but there’s nothing I can do to stop it, so I’m trying to view this objectively.

That means he knew where the bodies were buried, whose arm to twist, and which back to scratch.

That’s one small grave for a man; one big leap for a political party.

Wow, he served in Congress since 1987?!?! He must be a multimillionaire then.

He became a lobbyist after leaving the Senate, so I am sure he is a multi-millionaire now.

Ah shucks, I was hoping to see Sheriff Joe get a shot at it.

No one likes a loose cannon rolling around on deck in rough seas.

Arpaio is another version of Roy Moore. Way too many enemies and no support from the party establishment.

While not a #MAGA hat wearing Pro-Trumper, neither is he a never-trumper. A fairly middle of the road choice.

Of course, his stewardship and guidance of Kavanaugh’s nomination process, will be seen by the left, as a #MAGA guy.

The only TRUE LOSING of this position, would have been to appoint a McCain.

At least Trump won’t have to keep looking over his shoulder (as much as he did with McCain) to watch for the knife.

Ducey gets re-elected, Kulp steps down into retirement again “for personal reasons”, and Ducey gets to appoint who he wants. The McCains get no more say because no one gets a lifetime veto, and memories are short. 2019 is a lifetime away.

And the voters decide in 2020 who belongs there in case Ducey makes a boneheaded pick. But if he thought this one through as well as I speculate here, next one should be respectable as well if not perfect.

Of course it’s the Republican Party. Anything can go wrong.

Expect calls for him to recuse himself on the Kavanaugh vote.

Based on what I have seen so far, expect calls from McConnell for people calling for Kyl to recuse himself to go eff themselves.

Senators are not judges. There is no such thing as recusal for them.

You know that
I know that
Everyone at LI knows that

Even democrats know that.

Won’t stop the Kamalas and Coreys from demanding it anyway, tho

Come on, MIlhouse. We don’t need you to point out the obvious. Oh, wait! I remember Judge Jeff Sessions recusing himself from ruling on the Ruskie Investigation!

Sessions was not a senator. It is entirely appropriate for an attorney general to recuse himself from an investigation that involves him or his immediate circle. It is not appropriate for a senator to abstain from voting on a nomination just because the nominee is close to him. Possibly if he is himself the nominee, but I think not even then.

Kyl is a very middle-of-the-road choice, and is unlikely to draw protests from any direction. He’s not a conservative, but he’s not an overt squish either.

I hope no McCains. Either one, wife or daughter would justify their votes by claiming “this is what John would have wanted”. In other words, they would be wielding the Blue Falcon Shiv.

It was nice, but far from gushing like the despicable display by Never Trump Inc. last weekend at McCain’s Bye-Bye/Bash Trump party.

Kyl is no McCain, and let’s hope that continues.

A notable public moment was Kyl’s destruction of TurboTax Timmy Geithner during his confirmation hearing (I think)..

R’s suck at this sort of thing.

Why appoint a placeholder when you can appoint someone that actually wants the job and supports Trump’s agenda – set them up to run as an incumbent in 2020 and 2022 (IIRC AZ State law doesn’t allow appointee to fill until the full term is up, so the seat will be up again in 2020 and then again at its normal year in 2022).

What was the last one, was it Chris Christie’s appointment of some loser placeholder that announced he wouldn’t be a candidate in the special election? That set up Cory Booker for an easy win. If Christie had found a prominent R that actually wanted to run in the special election, and who might have had a chance in it, to appoint instead then T-Bone’s best bud might not be disgracing the Senate to this day. He’d still be a resident of New York, commuting to his day job in Newark.