Will be sent from visible campus plaza to another location, because of the impact the 1849 gold rush had on indigenous people. 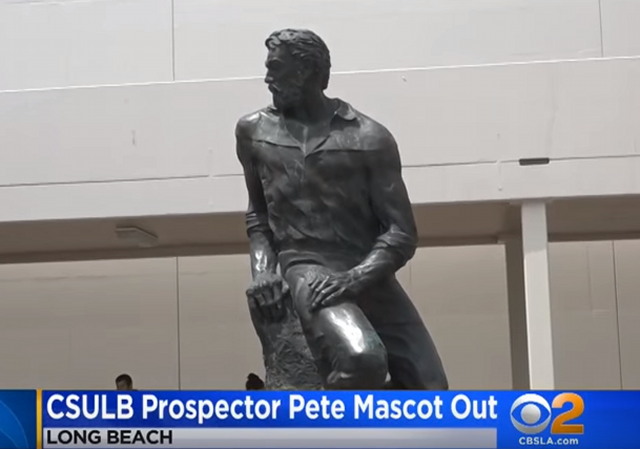 Another campus statue is being singled out for removal over political correctness. “Prospector Pete” is going to be taken off the campus plaza of California State University Long Beach and moved to an alumni center, because critics say the Gold Rush contributed to deaths of indigenous peoples.

This is reminiscent of efforts to remove a Thomas Jefferson statue at Hofstra University and a Christopher Columbus statue at Pepperdine University.

From the Associated Press, via ABC News:

California State University, Long Beach, will move its half-century-old “Prospector Pete” statue away from a prominent place on campus because of the impact the 1849 gold rush had on indigenous people.

A statement on the university website said the gold rush was “a time in history when the indigenous peoples of California endured subjugation, violence and threats of genocide.”

According to the university, the bronze statue formally named “The Forty-Niner Man” evolved from the creation of the original college in 1949 and founding President Pete Peterson’s references to having “struck the gold of education.”

The statue, unveiled in 1967, shows a rugged-looking, bearded man sitting on a rock. It features no gold mining or panning tools.

In recent years, university athletics have moved away from the college’s traditional “49er” and “Prospector Pete” sports team and mascot names in favor of the nickname “Beach.”

The university said the statue on a plaza will be retired to a campus area dedicated to alumni, but no further details were provided.

If you look at the efforts to remove these statues as a trend, and it is a trend, you might get the sense that there are people in academia who are intent on erasing certain aspects of American history and the target always seems to be white men.

The student newspaper, The Daily 49er, reports that some disagree with the removal:

Deon Williams, a sophomore history major, is opposed to having an animal mascot.

“I’m just tired of seeing animals honestly,” Williams said. “Then we wouldn’t be the 49ers, unless we just have a nugget. Maybe someone can dress up as a nugget.”

Williams thinks no one should forget the history of the prospectors.

“I’m not rocking with that Prospector Pete, but I understand that it’s been around for a long time, so people have to get used to it and not try to ignore the past,” Williams said.

As a member of the Choctaw Nation of Oklahoma, history major and Native American cultures minor Christopher Wilson asked his parents about their opinion on Prospector Pete prior to the announced retirement. Wilson’s parents stated they weren’t offended by it at all. However, Wilson’s biggest concern is that in removing Prospector Pete people will forget an important part of history.

These people, I swear (I know. I know. I shouldn’t), are non compos mentis.

1944, apparently coined by Polish-born U.S. jurist Raphael Lemkin (1900-1959) in his work “Axis Rule in Occupied Europe” [p.19], in reference to Nazi extermination of Jews, literally “killing a tribe,” from Greek genos “race, kind” (from PIE root *gene- “give birth, beget,” with derivatives referring to procreation and familial and tribal groups) + -cide “a killing.” The proper formation would be *genticide.

Generally speaking, genocide does not necessarily mean the immediate destruction of a nation, except when accomplished by mass killings of all members of a nation. It is intended rather to signify a coordinated plan of different actions aimed at the destruction of essential foundations of the life of national groups, with the aim of annihilating the groups themselves. [Lemkin]

Earlier in a similar sense was populicide (1799), from French populicide, by 1792, a word from the Revolution. This was taken into German, as in Völkermeuchelnden “genocidal” (Heine), which was Englished 1893 as folk-murdering. Ethnocide is attested from 1974 in English (1970 in French).
— etymonline.com

These people are brilliant. Abortion rites (i.e. selective-child) notwithstanding, this is the way to destroy a civilization without using a scalpel to disarm, decapitate, or otherwise dismember a body. We’ll see just how masochistic (“tolerant”) the American people are.

It is the undermining or destruction of collective memory. To a degree they’ve done it with Christianity and, in some cases, quite easily as it was ill-prepared for the onslaught. They’re continuing this with our nation’s history. The manner and basis for doing so is ever so flawed.

The statue of Prospector Pete serves as an illustration. “Critics say the Gold Rush contributed to deaths of indigenous peoples.” Who’s to say? Is there foundation to this claim? And, if so, how significant is it? Even so, who’s to say this symbolism is the main and overriding one of all others?

There’s the old saying about “not throwing the baby out with the bath water.” Well, this current crew doesn’t seem to care. And, consequently, they’re throwing out their cultural heritage, the good and the not-so-good.

“they’re throwing out their cultural heritage”

No, they’re throwing out OUR cultural heritage.

Good or bad, our history is ours and these PC slugs should not be able to edit history for their own gain.

Isis and many believers of islam are also busy removing statutes to the past.

Is there a pattern here?

Speaking of which….the perfect solution to this problem is to load the hollow core of the statue with explosives that detonate at the first blow of a sledge hammer.

Let them re-write that little piece of history, if they’re not to offended.

Might be worthwhile to note that CA had very few Indians before the gold rush, relatively speaking. Spanish slavery and mission confinement took its toll, as did diseases.And it appears the area was poorly populated from the start.Historians are unsure why in the north, but the south was a continuum of drought and forest fires. When the American settlers started arriving in the 1840s, huge swaths of the area were virtually unpopulated, as the Spanish also were not numerous. In fact by 1840 there were as many Anglo-Americans as Hispanics. Another little known fact is that the Hispanic population chose along with the Anglo population to be American rather than Mexican, after their petition to be a Spanish Crown Colony was rejected as impracticable.

Now, now……don’t go throwing around history and facts! It will just confuse the snowflake SJWs…….

(Give them some Play Doh and a few stuffed animals, maybe some coloring books….that should help those “triggered” by facts and truth.)

I am really glad these idiots are against gun ownership. If the fan blades begin to stink it will make things easier.

[“Another campus statue is being singled out for removal over political correctness. “Prospector Pete” is going to be taken off the campus plaza of California State University Long Beach and moved to an alumni center, because critics say the Gold Rush contributed to deaths of indigenous peoples.”]

A war or a pandemic killing a million people a day would give these SJW imbeciles something real to fret over.

The never-satisfied SJWs are bad enough – and make no mistake, they will never be satisfied. They’ll be back in a couple of weeks with another complaint.

But what really pisses me off are the wimp administrators who surrender at the first complaint.

Is there nobody in academia who has a spine?

“Is there nobody in academia who has a spine?”

In the administrative ranks? Apparently not and the faculties, especially in the History Departments, are no better and quite possibly much worse. When I was a college student back in the Stone Ages, otherwise known as the 60’s, people went to colleges and universities in order to acquire knowledge and the profs taught the subjects they were hired to teach. There were social and political activities as well but they were secondary to education.

At some point, unnoticed by me at least, this traditional role was abandoned in order to devote full time to indoctrinating our youth into Marxist-Socialist ideology … and it worked. Now we’re going to have a tough road ahead as we try to get them turned around. Perhaps we need to make my favorite Margaret Thacher quote our theme: “Socialism only works until you run out of other peoples’ money!”

Students are four (or more, SJW) year inhabitants of a college with developing (We hope) brains and knowledge. Staff move from place to place seeking security and tenure.

Alumni have matured and grown. Why let the Children decide?

“Why let the Children decide?”

The arrogance of youth, we all go through it. Unfortunately, college students have not had enough life experience to make informed decisions, and they do not understand how limited their world view is.

Explorers and mountain men are now persona non grata? Does that include films like Jeremiah Johnson? Robert Redford should be forced to denounce himself, his family and his co-workers.

Famous black explorer before and during the gold rush.
James Beckwourth
https://en.wikipedia.org/wiki/James_Beckwourth

James Pierson Beckwourth, born James Beckwith and generally known as, Jim Beckwourth (April 26, 1798[1] or 1800 – October 29, 1866 or 1867) was an American mountain man, fur trader, and explorer. He was mixed-race and born into slavery in Virginia, he was freed by his father (and master) and apprenticed to a blacksmith. As a young man, he moved to the American West first making connections with fur traders in St. Louis, Missouri. As a fur trapper, he lived with the Crow Nation for years. He is credited with the discovery of Beckwourth Pass, through the Sierra Nevada (U.S.) Mountains, between present-day Reno, Nevada, and Portola, California, during the California Gold Rush years, and improved the Beckwourth Trail, which thousands of settlers followed to central California.

He narrated his life story to Thomas D. Bonner, an itinerant justice of the peace. The book was published in New York City and London in 1856 as The Life and Adventures of James P. Beckwourth: Mountaineer, Scout and Pioneer, and Chief of the Crow Nation of Indians.[2] A translation was published in France in 1860.[3]

Early historians of the Old West originally considered the book little more than campfire lore. It has since been reassessed as a valuable source of social history, especially for life among the Crow, although not all its details are reliable or accurate. The civil rights movement of the 1960s celebrated Beckwourth as an early African-American pioneer. He has since been featured as a role model in children’s literature and textbooks.