“Get ’em out of here… Don’t hurt ’em, don’t hurt ’em” held not an incitement to riot and protected by 1st Amendment 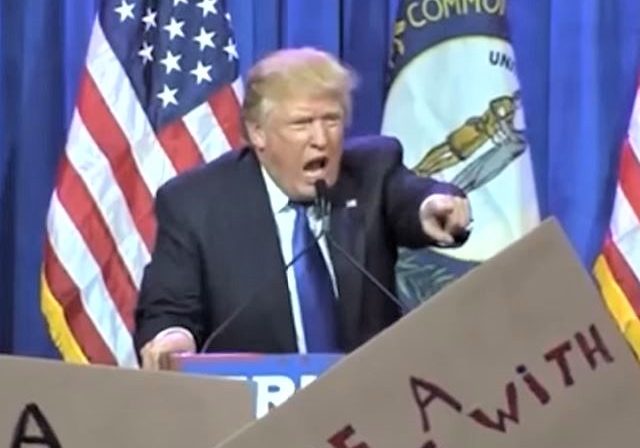 At a Trump campaign rally in Louisville on March 1, 2016, anti-Trump protesters tried to disrupt the event, as they had done and would do elsewhere, like Chicago.

In Louisville, Trump called for the crowd to “get ’em out of here… Don’t hurt ’em, don’t hurt ’em.”

Video clips showed some of the protesters being pushed:

An anti #Trump protestor, getting shoved out of Tuesday's rally in #Louisville. pic.twitter.com/Azw8fWOfVw

Man being lead out was wearing a #BlackLivesMatter sticker on his jacket pic.twitter.com/Xyu0Opr7Re

The result was a media narrative of Trump inciting violence, and a lawsuit by the protesters claiming Trump violated Kentucky law against inciting a riot:

Three Louisville residents who have sued real estate mogul Donald Trump for allegedly inciting a riot at his March 1 presidential rally said Friday the Republican front-runner should be held accountable for his hateful political rhetoric.

The lawsuit, filed in Jefferson Circuit Court on Thursday evening, alleges Henry Brousseau, Kashiya Nwanguma and Molly Shah were peacefully demonstrating at the Kentucky International Convention Center when Trump told supporters to “get them out of here.” All three plaintiffs also accuse a white supremacist and a Korean War veteran of assaulting them during the event after Trump’s comments.

The case was removed from state court to federal court because it met the test for federal diversity jurisdiction (plaintiffs were citizens of different states than all the defendants, and the amount in controversy exceeded $75,000).

The District Court refused to dismiss the lawsuit in its entirety (pdf.), allowing the incitement to riot claim to survive. In recognition of the disputed basis for its ruling, the District Court certified the case for interlocutory appeal. (That is, normally you only can appeal from a final judgment or an injunction, not from a denial of a motion to dismiss.)

The Appeals Court summarized the issue and holding:

Plaintiffs participated in a Trump for President campaign rally in Louisville in March 2016 . . . with the purpose of protesting. Perceived to be disruptive, they were unceremoniously ushered out after then-candidate Donald J. Trump said, “Get ’em out of here.” Plaintiffs were pushed and shoved by members of the audience as they made their exit and now seek damages from Trump alleging his actions amounted to “inciting to riot,” a misdemeanor under Kentucky law. The district court denied Trump’s motion to dismiss the claim but certified its order for immediate interlocutory appeal. The court identified a two-part question for review: whether plaintiffs have stated a valid claim under Kentucky law and, if so, whether the First Amendment immunizes Trump from punishment under state law. We answer “no” to the first part, because plaintiffs’ allegations do not satisfy the required elements of
“incitement to riot.” As to the second part, we hold “yes,” Trump’s speech enjoys First Amendment protection, because he did not specifically advocate imminent lawless action. The district court’s denial of Trump’s motion to dismiss the claim must therefore be reversed.

The three-judge panel was unanimous that the words were not an incitement to riot, and voted 2-1 on the 1st Amendment protection even if the words violated Kentucky law on inciting a riot.

Read the whole thing, but the law was so clear that Trump’s comments were protected that it should not have taken an appellate court to dismiss the case.

A rebuke to the hack district court…. who clearly allowed the case to live due to hackery, political bias and TDS. The Judiciary needs to get their house in order. But it appears they have NO internal branch duty to do so, nor do they have a vehicle. They just overrule one another and move on and leave the obvious politics to the impeachment process, which is clearly broken, as far as judges go.l

As I understand it, there are judges and circuits which consistantly get overruled by higher courts at a well above average rate. Which would seem to indicate they’re not following the laws. Without any pushback or consequences.

If a judge can be unseated for his promoting the Ten Commandments – in defiance of laws – logically other defiance of the laws by judges should also have consequences.

Even an unbiased and honest judge will occassionally be overturned, but wouldn’t it be nice if judges well outside the norm were treated like other workers expected to do their job who don’t. Let’s say the average judge gets 10% of his decisions overturned. In a more perfect world, we might see judges in a given calendar year fined 2% of their salary for every % of reversals above (say) 20% – upto a max fine of (say) 50% of their salary.

If more severe consequences are desired, make judges who are fined repeatedly (say last 3 years in a row) in eligible for COLAs or raises.

What about an originalist stuck in the 9th Circut? They would be ruling correctly by the law and getting overturned on a regular basis. Since most cases are not granted cert by SCOTUS, this would land harshly on them.

What is really needed is a way to clean out activist jurist-legislators.

One of my senators (unfortunately), Joe Donnelly, made it obvious in his concerns over Kavanaugh that the democrats are way more interested in judicial activism than following the Constitution. Donnelly’s sole focus was on whether Kavanaugh would take health care away from people with pre-existing conditions; it wasn’t about the Constitution or judicial views, it was about activism. I guess the democrats took that one step further when they did their dog-and-pony show with the kid at the hearings.

“Get them out get them put don’t hurt them” in what fucking reality is this kind of fucking shit inciting ANYONE fucking one to riot??