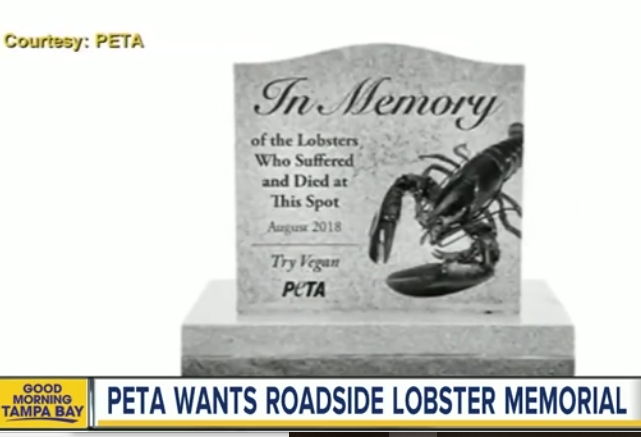 We recently reported that in response to pressure from PETA (People for the Ethical Treatment of Animals), Mondelez International (the parent company of Nabisco), has redesigned the packaging of its Barnum’s Animals crackers to “free” them from cages.

Hard on the heels of this success, PETA demands have gotten even wilder.

First, PETA sent a letter asking to Aretha Franklin’s estate asking them to give her fur collection to the animal rights organization’s fur donation program.

According to a press release by PETA, the furs will go to people in refugee camps and homeless shelters. Additionally, the furs get sent to wildlife rehab facilities that turn them into bedding for orphaned animals. Mariah Carey, Mary Tyler Moore and Sharon Osbourne are among the many stars who gave their furs to the program.

“By donating Aretha Franklin’s fur coats to PETA, her family could expand her legacy of social justice to animals,” PETA Executive President Tracy Reiman said. “While we can’t bring back the animals who suffered and died for them, these coats can help others by providing some much-needed warmth to orphaned animals and humans in desperate need.”

Next, PETA asked Maine officials for permission to build a large grave to mark the site of a truck crash that resulted in thousands of lobsters spilling out onto a highway.

PETA hopes to memorialize the “countless sensitive crustaceans” who were killed during the Aug. 22 crash in Brunswick, the animal rights group said.

Police said 7,000 pounds of live lobsters were destroyed and it’s suspected it was more than 4,500 lobsters that died, according to the Portland Press Herald.

The grave would “remind everyone that the best way to prevent such tragedies is to go vegan,” the animal rights group said.

This billboard has caused quite a reaction in #Baltimore, but what’s there to disagree with? Crabs are intelligent, loving, & have strong senses of sight, smell, and taste—but in the U.S. hundreds of millions of crabs are killed every year and many are boiled alive ???? #GoVegan pic.twitter.com/rlOvc3AV22

One of its famous restaurants, Jimmy’s Seafood, has a team that is obviously wise in the ways of social media.

Don’t want to be boiled alive but want to be slaughtered. Got it! ???? pic.twitter.com/9wMtsSK8qg

I do not think the response to the billboard campaign was what PETA intended, either.

Sorry PETA: Revenge is a dish best served cold, over spread out over newspapers, with nutcrackers and tiny wooden hammers ???????????? #Maryland #MarylandMyMaryland pic.twitter.com/rse0T7pP0h

I fear I am going to be gaining some weight over this Labor Day weekend, between the In-N-Out burgers and the Red Lobster meals I intend to enjoy.

PETA has taken the place of comedians.

“Vegan Seafood”???? WUT? Are they going to try to make me choke down a plate full of Kelp Krackers? NO! a thousand times NO!!!

Come on–a little garlic on that “vegan eel” and it tastes like chicken. Oh, wait . . .

How about introducing a new children’s’ food snack, ground jerky pressed into animal shapes. Growing children need healthy snacks. Perhaps sweeten those with stevia, Attribute creation of the product to a member of PETA who craves meat and must consume it on the sly:)

I’m not a seafood lover, but that Old Bay billboard is almost enough to make me reconsider my beefatarian ways…

That said, that lobster can feed hungry children, and, generally, contains a vitamin critical to human brain function. #HumansAreOmnivores with cause.

I wonder where PETA is with protesting abortion, after all, those children in the womb suffer while being torn apart so the mother can resume her important lifestyle.

It is insane to equate animal life of any kind to that of a human, yet this is what they do. Oh, but they do kill animals who are inconvenient to them, so I guess they are just as fine with abortion of millions of children.

They can have my crabcakes when they prey them from MY COLD, DEAD HANDS!!!

PRY them. Sorry. I was thinking about crab cakes.

Funny, I read it as pry and did not notice it was misspelled.

This looks more like a spoof than the O-C story!

Oh damn, I have so forgotten Lobster.
I’ve been too busy with the pork, chicken, beef, salmon, halibut, lamb, deer, muktuk, elk, moose, and caribou.
I must plan a big lobster feed soon.

According to Prince Charles, plants have feelings too.

I didn’t claw my way up the food chain to eat vegetables!

I eat my animal crackers the same way I do gingerbread men. Bite the head off quickly so they don’t suffer. There’s something wrong with the people who nibble slowly at the extremities….

Not me. I eat the heads last so the animal cracker or gingerbread man can hear my taunts as I eat each part…

I’m eating your foot…here goes your arm….look, look, I’m nibbling on your tummy. At the last moment before I cavalierly toss the head in my mouth, I laugh maniacally…..muahahahahahahaha….

Yet another fuss I’ll have to stay on the sidelines of, because I don’t eat shellfish. But in just over two weeks I’ll have my chance to thumb my nose at PETA when I do kaporos. There are always a dozen or so PETA demonstrators shouting abuse from behind a police barrier. Most ignore them, some have fun taunting them.

PETA is like the ACLU: a commie/fascist organization hiding behind a front of legitimacy.

A famous scientist once told me that if it weren’t for lesbians and barren women, peta wouldn’t exist. I have seen nothing in the last 30 years to make me believe that wasn’t true.

I feel like calling the rabbi and finding out if there’s any exception to the “no shellfish” kashrut rule, because for some reason I feel like running out and having some.

This is PETA, of course, which illustrated is ad equating chickens to Holocaust victims with a picture that included Elie Wiesel.

PRTA is proof that some people’s intellectual capacity is comparable to a lobster.

If you want to thumb your nose at PETA, do kaporos with a live chicken before Yom Kippur. That really p*sses them off.