“This was the right time for the next evolution in our design.” 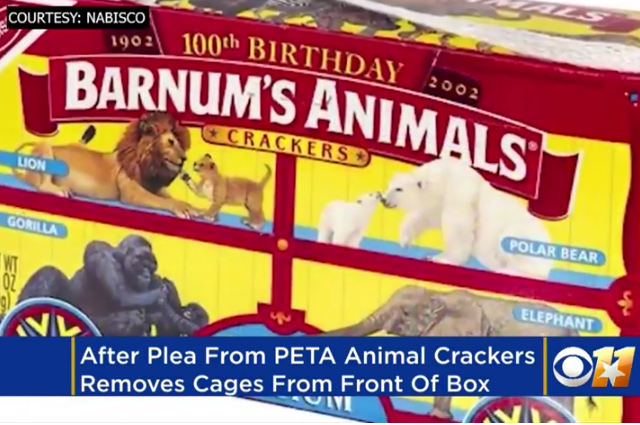 The last time we checked on the People for the Ethical Treatment of Animals (PETA), the group was at the center of a blue-vs-blue drama after it hired a bikini clad women to hand out non-dairy treats to the crowd at Wimbledon. Feminists were angry, claiming the organization was objectifying women.

Now, in response to pressure from PETA, Mondelez International (the parent company of Nabisco), has redesigned the packaging of its Barnum’s Animals crackers to “free” them from cages.

PETA, which has been protesting the use of animals in circuses for more than 30 years, wrote a letter to Mondelez in the spring of 2016 calling for a redesign.

“Given the egregious cruelty inherent in circuses that use animals and the public’s swelling opposition to the exploitation of animals used for entertainment, we urge Nabisco to update its packaging in order to show animals who are free to roam in their natural habitats,” PETA said in its letter.

The redesign follows the shuttering of the Ringling Bros. and Barnum & Bailey Circus in May 2017. The circus was the inspiration behind the cookies, which have been a staple of childhood.

Instead of animals caged in a boxcar on their way to a circus, the animals are now roaming free — side-by-side in a grassland.
Barnum’s Animal Crackers brand has been around for more than 115 years. The change is a result of evolution, says the company that makes the snack.

“Throughout our history, we have leveraged and evolved our classic design to drive awareness around key animal and environmental issues,” Kimberly Fontes, spokeswoman for Nabisco’s parent company Mondelēz International, told CNN.

“To continue to make the brand relevant for years to come, we felt this was the right time for the next evolution in our design, now showing the animals in a natural habitat.”

I can attest to the fact that the cookies are as tasty now as they were when I was young! However, other consumers have concerns.

Whose idea was it to remove the animal crackers from their cages?! pic.twitter.com/U9kI9dCHVe

Others put the importance of this protest in its proper perspective.

Imagine protesting because animals were in zoo cages on boxes of animal crackers. https://t.co/XABV1bDaaf

As always, a realist offers the last word on this development.

Hate to break it to you, but they end up in the cage of my belly anyway. If you listen closely, you can hear them screaming. https://t.co/kuwDq7kIQx

“Barnum’s”? Jeez, I hope they don’t get rid of the Egress. I may need it some day.

That damn Egress . . . How did this end up here? Just another of WordPress’s little mysteries.

Lions eat zebras and giraffes.
Elephants can kill lions.
Gorillas will rip anything to shreds if you screw with them.

*Sigh* We’re dealing with knuckleheads who have obviously never watched National Geographic programs or who have never observed animal life in the wild, which is often nasty, brutish, and short.

The cage boxes still have a polar bear, and one or two iterations back, the box had a walrus. I’d love to see how they’d work those two fellows into the new artwork.

They should have the Polar Bear eating a human.

Polaar bears are nothing but Cartesian bears with different ways of viewing things.

That or People for the Euthanasia of Throwaway Animals, where euthanasia is abortion’s senior cousin or Planned Retirement (PR).

Now the animal crackers are free to eat each other. I’m guessing the box will only have lions left by the time the boxes make it to someone’s shopping cart. Did the lions vote out the polar bears so there’d be less competition?

“I’m guessing the box will only have lions left by the time the boxes make it to someone’s shopping cart.”

The polar bear was eliminated because it suffered from white privilege.

I just spent on my monitor. Thank you for the laugh

I guess the old boxes are collectibles now.

I remember the boxes that still had a little white string threaded through the box. Little hands could carry the box like a purse or valise or some such. I imagine the string handles were declared a choking hazard by the U.S. Department of Killjoys.

Next up from the PETA idiots will be a lawsuit brought because people actually EAT those crackers, and we know we can’t have that…

Add Kroger to the politically correct mix, they’re going to get rid of their plastic grocery bags somewhere around 2025 I think it was.
I wonder when they’ll quit selling bottles of soda, water, juice, catsup, mustard etc.
Not to forget plastic garbage and kitchen bags, coffee jars and tons of other plastic packaged goods.
And maybe they should quit using diesel trucks to deliver the grocery items, diesel is so bad for our environment.
Come on Kroger, you politically correct back patters, go big or go home.

Peta is full of nut cases.

I remember those string handles on the boxes. I also remember the special treat it was when my brother, sister and I were each presented with our very own box at the start of a long road trip. Peace in the backseat.

BTW, I also remember the documentary about “Grizzly Man,” wherein large carnivores were just fine without cages, until one of the dyslexic furries got confused about the whole “friends, not food” thing.

If Grizzly Man was that one who – along with his girlfriend – got eaten, he asked for it. Yes. Bears each have a personality. Yes, they are interesting to watch. Yes, they are quite intelligent. But, in the end, they are wild animals.

I had a friend in the Navy who lived on a huge ranch in grizzly country (Montana). There was a live and let live “understanding”. The bears knew you were there. They even seemed to recognize individual people after a while. But, you left them alone; you didn’t try to be their buddies. You didn’t interrupt their feeding, courtship, or in the case of females, get between her and her cubs. In short, obey the rules and nothing will go wrong.

That idiot who got eaten pushed things WAY too far.

I quit eating Animal Crackers long ago. The package always said not to eat them if the seal was broken and they often do not even have a seal cracker inside so I was never sure if they were safe to eat.

Alas, reality has become the theater of the absurd:

LOL. Looks like the most spoiled creatures on the planet have forgotten why some animals are kept in cages.

I see a bike tour of Africa in their future.

Considering that zoos are all that are keeping many species from extinction, the sentiment “animals don’t belong in cages” somehow seems more emotive than rational.

Does PETA truly wish to close all the world’s zoos and, if so, do they realize that the likely consequences would be (1) the animals that had been in these zoos would be unlikely to survive in the wild, even assuming suitable wild habitat could be found for them and (2) the longer-term result would almost surely be additional extinctions?

And, no, you can’t take the animals home. Even in nutty places like California you won’t be permitted to keep an elephant or tiger (uncaged!) in your backyard.

Now I can hunt them for sport, we have removed their human protectors. mmmmm…. wait, are these gluten free?!

Zoos and cages are literally all that are saving some species. I have zero sympathy for animals that won’t screw to save their own species. I’m looking at you pandas. If it weren’t for zoos, they’d have gone the way of the dodo by now.

PETA:
a very small number of people with a very large orifice