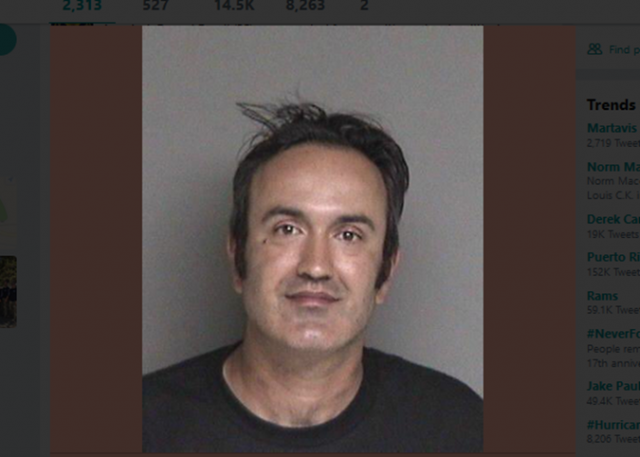 Many pundits, including myself, have warned that the increasingly vitriolic tone of Democratic Party leaders will eventually lead to even more actual attacks on supporters of President Trump and Republicans….in addition to the ones we have already recorded.

This warning has gone unheeded, as the Democrats have continued to gin up their base using edited videos, staged camera shots, and outright hostility. It appears that the fear-and-loathing approach has worked, inasmuch as a Republican congressional candidate in California District 15 was attacked by a man uttering curses at President Donald Trump and wielding a knife.

A Republican congressional candidate in California fended off a knife attack on Sunday — and an election sign helped the candidate keep the attacker at bay, authorities said.

U.S. House of Representatives hopeful Rudy Peters was “minding his own business with his family” at his campaign booth during the Castro Valley Fall Festival just before 4 p.m. when a man came up and began insulting Peters’ political party and the president, Sgt. Ray Kelly, a spokesman for the Alameda County Sheriff’s Office, told McClatchy.

That’s when the interaction grew violent: The man making disparaging comments, Farzad Fazeli, 35, became “aggressive,” pulled out a switchblade and tried to attack Peters, the sheriff’s office said. Kelly said Fazeli may have also thrown a glass mug at the candidate.

After a brief struggle between the two men, Fazeli fled the scene.

He was arrested shortly after and was booked into the Santa Rita Jail on suspicion of felony assault, criminal threats, brandishing a weapon and possession of a switchblade knife.

No serious injuries were reported during the conflict, according to the sheriff’s statement.

Peters is an avid supporter of President Trump, and his campaign website includes #MAGA references. Up until this event, Peters was never concerned about his safety though his wife has often warned him to be careful.

“All of a sudden we hear someone screaming, “F— Trump, f— Trump!” Peters recalled. He said the man raised his middle finger and was “standing right in front of the booth.”

Peters had been sitting with Joseph Grcar, a Republican state Assembly candidate. He said they were both “kind of shocked” by the outburst, but that the man seemed like he was walking off. “The next thing you know,” Peters said, “he stops and turns around and says, ‘I’ll show you,’ and runs at the booth.”

Peters said the man grabbed a coffee cup from the table and threw it at him, prompting Peters to come around the table and “grab him.” Peters said he threw him to the ground before the suspect hopped back up, reached into his pocket and grabbed the switchblade.

“He’s screaming, ‘I’m gonna kill you, motherf—er!’” Peters said. “He had the knife, but the blade wouldn’t shoot out.”

If the knife had not malfunctioned, the ending to this story could have been far more tragic.

Peters’ opponent tweeted a condemnation of the attack:

On Sunday, my opponent @PetersCongress was attacked at his campaign booth in Castro Valley. I’m glad to hear Mr. Peters is okay. But it’s NEVER okay to use violence to settle political disagreements (or any disagreement). Fortunately, @ACSOSheriffs arrested the suspect.

To give you a sense of the wit, wisdom and politics of Fazeli, I tracked down this entry in his Facebook page (fortunately I got it, before the Facebook team decided to make it disappear). 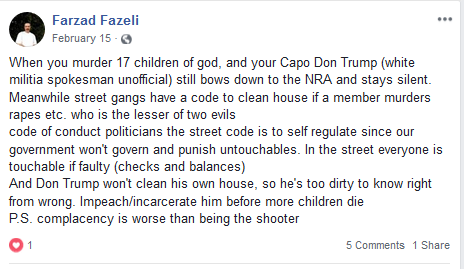 I think after his jail time is served, Fazeli might fit right in at The New York Times Editorial Board…as long as they keep the blades away from him.

I am sure the elite media will be right on top of this story, after they give us an update on Congressman Steve Scalise, injured during an attack on the GOP Baseball team by a Bernie Sanders supporter.

Portland Oregon, Berkley, Charlottesville [the counter protestors attacked the White Supremacist marchers, not vice versa], the GOP softball team shootings and two dozen more incidents of violence from the left make this expected, not a surprise. And, it is likely to get worse before the mid-terms. If the Dems do not take back the House in November, despite the vote fraud which will occur, we will be treated to a repeat of the post-2016 election antics of the left; more Portlands, Berkleys, etc.

“We better let them take back the House in November to avoid the violence.”

Exactly what the liberal fringe wants. This violence is designed to frighten moderates and conservatives. Virtually everything that the liberal/progressives are doing is designed to intimidate anyone who does not agree with them or might work, or even vote, against their interests. This country is in the middle of a civil war, in which one side, the liberals, has been resorting to violence against the other side since the 2016 election. The liberal/progressives violated the law before the election and now there is no reason for them not to continue to do so. But, there is always a tipping point. When it is reached, the rest of the citizenry will resort to violence as well. Then we will have a shooting war which this nation may not survive. That is why it is imperative that moderates and conservatives demand that the leaders of this nation aggressively prosecute those that use extra legal [illegal] means to attempt to control the people of this nation.

Violence or the threat of violence to further political aims.

The up side of this is that I now have names of a couple of political candidates to be recipients of donations, even though neither will be on my ballot. They are working to break the communist’s strangle hold on the CA legislative institutions.

From that facebook item it appears the a-hole is no better with English syntax and punctuation that he was with that knife.

Political violence in the USA has long been almost exclusively a phenomenon of the left. Unlike Europe, in this country violence on the right was very rare, almost unknown. Unfortunately this has become slightly less so in the last few years, but the vast majority of the political violence is still on the left, which has been its natural home for so long.

Two of the most notorious attacks were blamed on shadowy right wing figures when in fact they were nothing of the kind, just to suit the Left’s political fantasies. Of course, I mean both Kennedy assassinations. Oswald was infatuated with Communism and the Soviet Union, and Sirhan Sirhan was a Palestinian activist. But somehow the media has worked for 40 years to give the impression that those were “right wing” assassinations.

And as to the other famous assassination of the 60’s, of MLK, there have been so many insane conspiracy theories spun about that one over the years that to delve into it at all is to launch oneself into the Mountains of Madness.

You really think Oswald did it? Really?

And Jack Ruby just wanted to avenge the Presidents death?

And I don’t know Jack’s motives, but the evidence to the contrary on both these points is lacking.

From the lone wolf events of more recent decades, it’s pretty clear that you don’t need a conspiracy to carry out an assassination. Just one crazy determined to do it. There may have been powerful people who smiled at the news, but that does not mean they were pulling the strings before the fact.

Yes, there is no question that Oswald did it, entirely on his own, and anyone seriously questioning that is as cuckoo as those questioning the moon landing, or the roundness of the earth, or the safety of the MMR vaccine.

Nazis were leftists. Europe has no right wing violence that I’m aware of.

Leftists claim there is a different frame of reference in Europe. However, principles of diversity (e.g. color judgments), Pro-Choice (e.g. selective-child), bigotry (e.g. Jew privilege), and redistributive change, all match the those sincerely held by our own liberal sects and left-wing ideologues. The Nazis were left-wing in an American frame of reference, and the current functional character of the European ideological spectrum.

Europe has a long history of right-wing nationalist and racist violence. The fact that the nazis were socialists isn’t relevant to that.

Being a nationalist makes a communist right wing? In what universe? I suppose next you’re going to claim that Stalin and Mao are either right wing or weren’t nationalists.

In the European context that’s what “right” means.

Oh, what should we do with a pedant or two?
Mark him up, knock him down, or just ignore him all around.
Be of good cheer our host’s meaning was clear.
Though your English is gooder than mine tis true.
Your courtesy sucks.

There’s only one solution: shooting progressive attackers. A price needs to be extracted for this behavior.

Wouldn’t you say the media is complicit is this? They constantly bash Trump and refuse to criticize (or even cover) Antifa. After all, Jim Acosta and CNN accuse Trump and conservatives of endangering the members of the media.

One could blame Maxine Waters with her call for “confrontation”.

Not to mention that this guys opponent is Swalwell, a LunaticLeftySupreme

Even if The Media and The Left (BIRM) occasionally will admit their rhetoric causes violence, don’t expect them to change their tune long term.

In 2000 Farrakhan admitted in person and on camera that his rhetoric (“a person deserving of death”) helped drive the murder of Malcom X – to the victims daughter.
In 2918 he repeatedly says he’s “blameless”.

The Left knows EXACTLY what they’re doing when the go into “will no one rid me of this botherson priest” mode…..

And killing political opponents has been a leftist trademark (TM) since the October Revolutiin.

Well, he certainly looks proud of himself in that mug shot.

With a name like that, I don’t imagine he’s exactly mom, apple pie, and Chevrolet, from Our Town USA…

Most Persians in the US are refugees from the mullahs’ regime, and therefore can be assumed not to support it.

Vanquished by a political sign. It would make a great political cartoon for the campaign, the hero triumphing over evil, like the hero in a vampire movie victorious using a cross to fend of Dracula.

And this is why you spend the extra $$ for a Benchmade Automatic. 😉

Why is a knife attack while screaming “I’m going to kill you” mere assault and not attempted murder?

…. and just like that… released on $50K bail. Incredible. Isn’t San Fransisco progressive? How awesome.