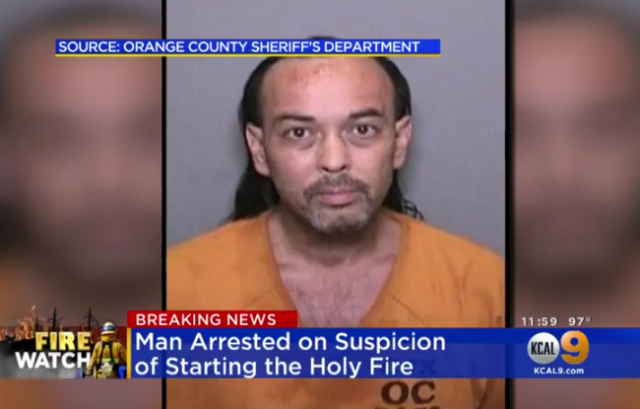 As of today, there are 17 wildfires burning in California.
In late July, I reported on the Cranston Fire, which was reportedly started by an arsonist and is now nearing containment. Brandon McGlover, 32, now faces life in prison for setting the blaze that ultimately forced 6,000 from their homes and threatened another 4,900 structures.

Now, a second suspected arsonist has been arrested, this one accused of setting the Holy Fire now burning in Orange County.

A man was arrested Wednesday in connection with the Holy Fire, which has burned over 4,000 acres in the Cleveland National Forest.

Forrest Gordon Clark, 51, was booked into the Orange County Jail on suspicion of two counts of felony arson, one count of felony threat to terrorize, and one count of misdemeanor resisting arrest. If convicted on all of the charges he faces, Clark could be behind bars for life.

He is being held in lieu of $1 million bail and is set to be arraigned Thursday. Officials do not believe Clark is connected to any other fires in Orange County.

More than 600 firefighters, all of whom could have been sent to the other 16 fires, are now fighting this inferno. Two of those responders have been treated for heat-related injuries.

It appears Clark sent out a warning email that he was going to set the fire.

A man who sent an email warning “this place will burn” has been arrested in connection with the Holy fire on suspicion of two counts of arson, one count of felony threat to terrorize, and one misdemeanor count of resisting arrest.

…Clark owns a cabin in the area that was devastated by the flames. Of the several cabins in the area where he lives, Clark’s is the only one still standing. Deputies arrived at Cabin 14, where Clark has lived for more than a decade, around 10:15 a.m. Tuesday. He was questioned again and arrested Tuesday night.

“He has issues,” Milligan said. “I hope they get him.”

To get a better appreciation of the challenges the community faced from Clark, here is a video interview made of him after the fire started but before his arrest:

In other wildfire news, Yosemite National Park remains closed indefinitely, the Mendocino Complex Fire is officially the largest in state’s history, and smoke now covers 3/4 of the state.

Map: Where wildfires are burning in California right now —> https://t.co/8G9C4cLI33

I sure hope our two gubernatorial candidates can offer solutions to prevent destruction on such a vast scale again, beyond the platitudes associated with climate change. For example, allowing the timber industry to actually do its job.

…Despite opposition from some environmental groups, there’s talk of the need to remove more barriers to logging given that wildfires have become bigger, deadlier and faster moving. California’s timber laws are considered the most stringent in the nation.

“You’ve got a lot of fuel, you’ve got dead and dying trees, and a lot of hot weather — and it’s a recipe for disaster,” said Assemblyman Jim Wood of Healdsburg in Sonoma County, a member of the Senate and Assembly conference committee on wildfire preparedness and response.

Additionally, a proposal to address the threat to public safety that some mentally ill people present would be a welcome campaign plank.

Prayers for the success of our firefighters and their support teams.

California environmental activists can be relied upon to support the very worst public policies. In my opinion, this is because 1) they are misanthropes, and 2) they are all confirmed-non-math majors.

R.e. your point number one, it’s very apt. George Orwell wrote in The Road to Wigan Pier, one of his few non-fiction works, that your average British socialist in the 1930s couldn’t have cared less about those they claimed to care about. They didn’t care about the working class, and had no intention of helping them. Orwell was in many ways the average early twentieth century British socialist. He had been born in a middle class family and as he freely admitted after he saw the intolerable conditions in British coal mines (he called it hell) that he had led a life full of easy comfort.

The difference was he actually established a real connection with the coal miners and other industrial workers in the north of England. His fellow socialists of similar background simply hated the rich.

The environmentalists likewise claim to care about the environment but in reality they simply hate people in general and Americans in particular.

Hopefully the judge who handles these two cases will have a backbone instead of a noodle for a spine.

Given the totality of destruction by these fires caused by arsonists, even if there is no loss of human life, the impact fairly replicates what may be sustained by a Weapon of Mass Destruction. Accordingly, the arsonist should be sentenced to death to make sure that they never get the chance to set another fire; never get set free, despite a life sentence, because some Social Warrior Group manages to get an release so that the public is placed in jeopardy again. Fuggem.

Wonder if their previous arsons might be related to the fires that decimated vineyards and such around San Francisco, a year or two ago, also arsons.

Governor Moonbeam says that these fires were caused by global warming.

Someone needs to ask him how global warming creates arsonists.

Global warming is responsible for the California wildfire. It so heated up this guy’s brain that sparks shot out of his eyes and ears into piles of dried brush. Now, the problem is how to explain all the other overheated people who didn’t do this…